What do The Simpsons, Voltron, Hey Arnold!, Bob’s Burgers and Rick and Morty have in common? Aside from being awesome, they’ve also been immortalized by streetwear company Sprayground in exclusive lines of backpacks. The brand’s collections — which also include edgy, head-turning designs inspired by NBA teams, video games, and rappers — regularly sell out online, making them uber-collectible and highly-coveted. Thankfully, the web-based company’s creator, David Ben David, understands your TV-themed bag needs and has been gifting fans with brick-and-mortar pop-up shops stocked with product that is often ungettable anywhere else.

Stuff We Love: All Your Comic-Con 2018 Must Haves

In July, Sprayground — which just launched a collaboration with Shaq — took over a storefront in L.A.’s Fairfax neighborhood for a week-long stay and saw bags, minis, and crossbody packs fly off the walls (fitting, since some actually feature wings). And now, New Yorkers can load up on the goods at their End Of The World Party pop-up shop at 5 Times Square. Running from August 19 to 26, the leopard-wrapped location is carrying 160 styles, including exclusive pieces, and will be hosting an array of events throughout the week. On opening day, there was nonstop dancing in the window of the shop:

In addition, there’s a seven-foot Transformer-like statue made of various Sprayground units called “Luggator” and another branded monolith atop a mountain of toys. Of course, this is going down in one of the busiest intersection on Earth, so if you’re hungering for a bag emblazoned with a thugged-out Barney the Dinosaur, get yourselves over there pronto! 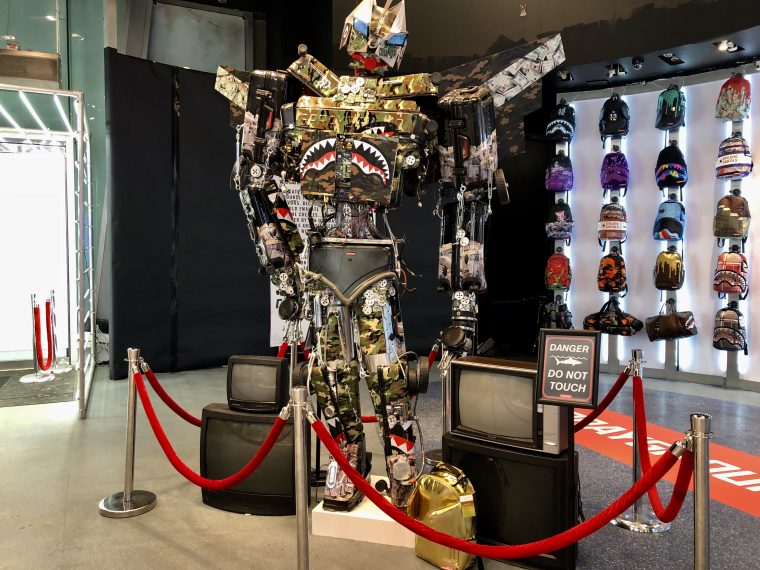 The Sprayground pop-up shop is located at 5 Times Square and will be open from 8AM to 11PM til next Sunday.