‘The 100’ Season 3 Premiere: The Inside Scoop on Linctavia, Clarke’s Hookup and the City of Light

Season 3 of The 100 kicked off last night and already we’re like “Whaaaaat?!” Clarke (Eliza Taylor) has become a wanted woman for destroying Mount Weather, Bellamy (Bob Morley) is a boss, and Murphy (Richard Harmon) is suddenly…likable? Before you all flip out like Jasper did on that cute piano player (pop star Shawn Mendes), here’s executive producer Jason Rothenberg with some tidbits to hold us over until next week!

It seems like this season will place the Sky Crew right in the middle of the battle between the Tree Crew and the Ice Nation.
They are for sure. They have to decide. There’s a civil conflict between various elements within Sky Crew this season, and they need to decide whether they want to make peace with their neighbors or whether they want to defiantly say, “This is our land now, we’re here, try to friggin’ move us off it.” When we start the season, the more peaceful mentality is sort of in the driver’s seat, as it were. Abby [Paige Turco] is still the chancellor, Kane [Henry Ian Cusick] wants to make peace with the Grounders and there have been back-channel negotiations to try to find out how they’re going to live post-Mount Weather with them.

This divide seems to be personified by Lincoln (Ricky Whittle) and Octavia (Marie Avgeropoulos). He’s almost assimilated to our people’s style and she is the one who’s so much more connected to the Grounders.
That’s true, yeah. Since childhood, he’s always been a forward thinker, a visionary, if you will. He was fascinated by other cultures and he was a wanderer…even though he’s a warrior and a powerful one, I think the most anti-war people are the people who have to fight the wars. So Lincoln knows what war does and what the cost of it is and would love to figure out a way to live together in the world with the Sky Crew and the Grounders. Octavia has come from a place on the Ark where she was nobody, she was literally persona non grata and didn’t exist. She was locked away just for being born. That’s not a people that she holds a lot of affection for. [Laughs] So then she found this other culture and they accepted her, Indra made her her second, and she found herself in many ways. She is drawn towards them, perhaps even more than she is to her own people. 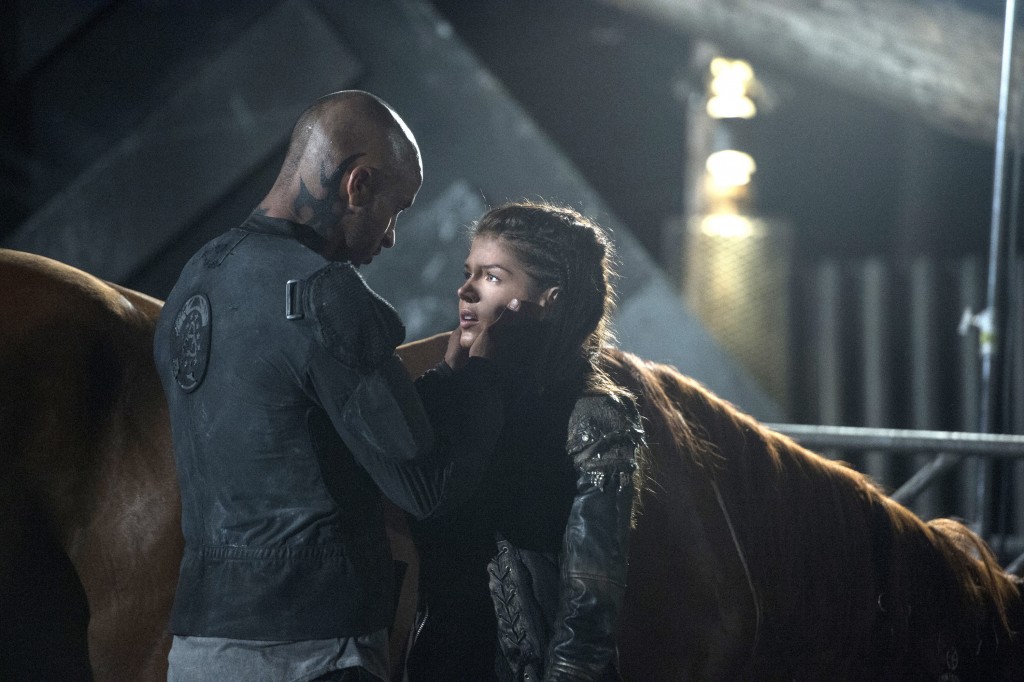 “This should make the shippers happy.”

Even Bellamy?
Of course she has her brother. Ultimately, the story will revolve back to the idea that those people from the original 100 are bound together because of the experiences that they’ve had. When we meet him in Season 3, Bellamy is not fighting for the good of the Sky Crew, he’s protecting his people—the survivors of the 100. What’s good for them is what he supports, and if that means that Sky Crew makes peace then he’ll be with the Grounders. He can get down with that. If it means something else, he’ll always make the determination based on what’s best for his people.

Speaking of getting down, Clarke…
Yeah I know what you’re referring to! [Laughs] You know, she’s out there on the road, she’s lonely and trying to escape. That scene you’re referring to is more about just escaping pain—even for one moment or one night of pleasure—and getting away from it. It’s the same reason why you might get drunk or whatever. She’s trying to escape from who she is and what she’s done and the memory of that. It doesn’t last long.

Clearly! Now, what can you tell me about the City of Light? Are Jaha (Isaiah Washington) and Murphy on a wild goose chase?
The City of Light is real and there’s no pain in the City of Light. I can tell you the reason that Allie [Erica Cerra] was created by Becca, who we see in those videos in the first episode, was to make Man better. It was to help the human race, but she had a perverse way of doing that. It’s actually called “perverse instantiation.” It means getting to an admirable goal through perverse or bad means, i.e. there are too many people in the world so let’s eliminate most of the people to fix the problems of the world. That’s what Allie wanted to and did eventually do.

Basically thinning out the herd?
Yeah. And by the way, it’s not unlike the mentality on the Ark when they needed more oxygen, so they eliminated 300 people. It deliberately echoes some of the hard choices that our actual characters have had to make. And the City of Light is Allie’s continuation of her mission. She [thinks she’s] trying to make us better.