There is no doubt that Season 4 of Empire will bring us so many OMG moments. For example, the season premiere started off with Lucious hopping out of a vehicle with only one leg. I’m surprised Cookie hasn’t used his prosthetic leg to whack someone yet. Who knows, it might still happen. Here are five OMG moments from Empire Season 4 so far.

1. Lucious gets “baptized” by his mom

Here we go again with this one. At first I thought Lucious (Terrence Howard) was dreaming or hallucinating, but then I saw Mama Walker (Leslie Uggams). She’s no joke. At least she helped him remember some things…I guess. Lucious had flashbacks to when he was a kid and what he went through with his mother trying to kill him. Leah says that evilness is inside Lucious but I’m pretty sure trying to drown your son is pretty evil too.

Nurse Claudia (Demi Moore) takes Lucious to one of his old favorite places to eat. She shows Lucious a picture of him at the restaurant, hoping something will click. However, nothing seems to ring a bell. The owner, Clem comes over to take their order and recognizes Lucious right away. Lucious wants to find out who he used to be and since Clem seems to know, he asks for his help. Clem mentioned Lucious always being around Eddie Barker (Forest Whitaker). Pretending he has to use the restroom, Lucious sneaks away from Claudia and finds Eddie Barker. Sadly, Eddie’s story about Lucious beating up a man and throwing him into a trunk was too much for Lucious to hear. 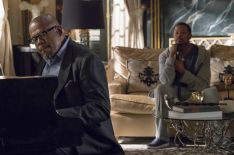 The Academy Award winner is set to star in multiple episodes.

Someone is trigger happy again. Cookie (Taraji P. Henson) catches Leah going through her things, looking for her gun. Leah tells Cookie that she needs to get rid of Nurse Claudia because no one gets in the way of their family. It might be the fact that she’s trying to kill her but I don’t think Leah sees Claudia as someone who can help Lucious. Plus, she calls her a witch. As Leah was about to leave the room, she admits to Cookie that she’s taken care of a problem similar to this before. She tells her that she killed Tariq (Morocco Omari) and put the blame on Anika (Grace Gealey) to get both of them out of the way of her family. If Leah cares about her family so much, why is she trying to kill Lucious?

4. Lucious signs his mom away

After hearing what Leah admitted to Cookie, it’s no surprise that the Lyons pulled an intervention on her. Claudia tries to explain to Leah that where she’ll be going is a nice place and that she’ll be under great care during her stay. I guess it wouldn’t be nice to say she’s getting thrown into the loony bin, right? Lucious can sign papers admitting his mother since there’s no way she’s going to sign herself up. Even though he doesn’t remember everything, he knows Leah needs some serious help and signs her away. Leah won’t go down without a fight and screams that Lucious was always evil and she tried to get the demons out of him since he was a baby.

Lucious wakes up in the middle of the night, frightened by a storm. He gets out of bed and walks into Claudia’s room. He sees her packing her belongings into her luggage and questions if she’s leaving him. She tells Lucious that it’s her time to go. Claudia has already made arrangements for someone else to fill her spot. Lucious starts to panic and blames himself for ditching her at the restaurant. Claudia assures Lucious that’s not why she’s leaving. She feels she cannot do her work properly without full trust. Lucious tells her that she is the only one he trusts and begs her not to leave. He tells her about how safe he felt when he woke up in the hospital and saw her face right away. Claudia cuddles Lucious and tells him she won’t be leaving.