My Obsessions: ‘Meet the Press’ Moderator Chuck Todd Hopes For a ‘Lost’ Redo and Wants to Become a ‘Walking Dead’ Zombie

My current favorite showGame of Thrones. Bottom line: It is the single best show about modern politics on TV today.

What I hate-watch No disrespect to the cast, but I can’t stand watching Full House. My kids love it, thanks to Fuller House. 'Dancing With the Stars' judge and former pro Julianne Hough weighs in on her favorite TV programs, and her most hoped-for costar.

What I eat while watching Wings. I’ll eat bad chicken wings over good anything else.

The show I miss most I’d love for someone to redo the last season of Lost and make me love it again.

The show I’d like to guest star onThe Walking Dead. Who doesn’t want to be in zombie makeup? 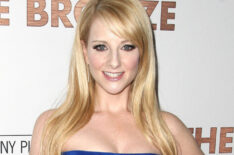 The first thing I watch when I wake up During baseball season, it’s MLB Network’s Quick Pitch. It’s actually already on when I wake up, thanks to my son.

The last thing I watch beforeI go to bed Half of the latest episode of The Americans. It usually takes me two nights to finish one episode of whatever show me and the missus are obsessed with that month.