The Amazing Race Season 34 came to a close with the December 7 episode, and after weeks of trekking ’round the globe, Team Big Brother won the $1 million. While Derek Xiao and Claire Rehfuss’ journey to victory was hard won, they tell TV Insider the run to the finish was suspiciously easy.

Derek and Claire (who met on Big Brother last year and started dating shortly after) made it to the final challenge first, finding a giant keyboard upon their arrival. Derek knew how to play the piano and said in the episode that he thought that knowledge would help, but he tells us it wasn’t as much of an advantage as it may have seemed. Still, he was confident in their chances of winning because the other two pairs didn’t catch up for 20+ minutes.

“I just knew how much of a learning curve there was to the challenge and that the other team couldn’t show up and just blow it away, because there’s so many things you have to learn,” he says. Their lead didn’t assuage Claire’s fears. “I was very nervous,” she shares. “I felt very confident when we were the only team in there. I was like, ‘We’re good at memory. We know what we’re doing. We just need to do it. But still, I would love for us to finish it before anyone else shows up.’ Because [while] a team can’t blow it out of the water, a team can go a little bit quicker than you. And it’s very hard to evaluate how much time things take in the race because you’re under so much pressure. We were definitely there for a while by ourselves, but I couldn’t tell you now if that was five minutes or 20 minutes.” 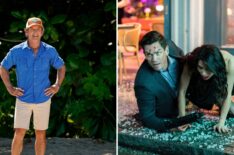 They did eventually become aware of just how big their lead was, and Derek realized the $1 million was as good as theirs as they did that final run to the finish line at Nashville’s Ryman Auditorium, the Grand Old Opry’s former stage. As they ran, Derek says he said to himself, “We know we’re in first place. We know the leg is done. All we have to do now is run to Phil [Keoghan], and we’re gonna win $1 million.” Shaky hands slowed down getting directions and a bad leg cramp forced Claire to practically limp her way in, but they still made it first. Claire did fear there would be a catch.

“You see me hobbling in there. It was the most bizarre thing,” she says of her sudden leg pain. “It happened 20 feet outside of the venue, so I was dealing with that, and then dealing with like, ‘Oh my God, we’re about to win this.’ But then we’re also very paranoid that we missed something, or that we incorrectly parked somewhere, and Phil would be like, ‘Well, actually you didn’t win,’ or ‘Actually, here’s a time penalty.’ It wasn’t real until Phil actually said, ‘You won the race.'”

Outside of winning (they’re the second Big Brother pairing to win), the couple says their favorite part of competing on the long-running CBS series was getting to know the Season 34 competitors and their stories. Derek says the season’s pairings are “amazing,” “hilarious” people they both hope to remain friends with moving forward. Claire adds they made the competition tough and thrilling, also noting that the individual challenges throughout the season were unforgettable for her. When else would one try yodeling and motorcycling on the same trip? “Going on these shows, it kind of makes the target on your back, but I think both of us would love to do it,” Claire says. Their ideal season: a Survivor: Blood vs. Water, in which pairs go in to compete against each other.

“I think me alone, I’m out pre-jury. I’m the first or second person out of there,” Derek admits. “If we’re going on together, I’m still going out, but I can use my eviction. I can be a martyr for Claire.”

“Don’t give out all our strategy!” Claire jokes in response. “It’s hard ’cause we won the race. You can kind of only go down from here by going on another show. If this finishes [our time on reality TV], I’m more than happy.”

Going on another reality show isn’t completely out of the cards for the couple, but they’ll use a more “discerning” eye in the future. For Derek, he wants to make sure the show seems like his idea of fun, like Amazing Race. For Claire, she wants to have fun and she wants to be confident she could win.

“Having won this, you are hungry for it,” she says. “It’s such a fun opportunity to compete on such a high level.”