[Warning The below contains MAJOR spoilers for Yellowstone Season 5 Episode 4 “Horses in Heaven.”]

“I am not starting this day sober,” Beth (Kelly Reilly) says at the end of the latest Yellowstone episode, and considering it starts with her in a jail cell and she must rely on Jamie (Wes Bentley) for help and ends with her finding Summer (Piper Perabo) in her kitchen… who can blame her?

After getting into a bar fight with a woman who tried to pick up Rip (Cole Hauser), Beth tells Jamie to sweep it under the rug. Easier said than done, he says. Their only hope: The other woman doesn’t file formal charges. Still, if this reaches the press, it’ll embarrass their father (Kevin Costner). “You mean my father,” she corrects him. “Your father’s out of chances to be embarrassed, isn’t he Jamie?” (Ouch!)

Jamie does talk the woman out of pressing charges — there’s no self-defense claim in a bar fight, so the state would have to press charges against her, and as a non-resident, she’s a flight risk, so she wouldn’t get bail — and Beth insists he drive her home. But once in his car, she notices the car seat in the back… and as you can imagine, isn’t too pleased to find out he has a child.

“You have my womb cut out of me, and God gave you a boy?!” she asks in disbelief, hitting him and causing the car to swerve on the road. He stops on the side of the road and follows her when she gets out and begins walking. “Taking you to that clinic is the greatest regret of my life,” Jamie tells her. Oh, and by the way, John doesn’t know about his son. No one does. Well… Beth promises to take his son from him and rob him of fatherhood before walking away. (Uh-oh.)

Beth then spies on Jamie out for drinks with Sarah (Dawn Olivieri), and while they’re hooking up in a shower stall in the bathroom, she snoops in the other woman’s bag, snapping a photo of her license. Sarah’s not her real name, Beth determines after searching the internet. Then, she’s distracted when she sees Summer sneaking into the kitchen (more about that shortly). After the two exchange barbs, Beth sits outside with a drink and cigarette.

Elsewhere for the Duttons in this episode: 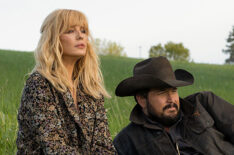