Grass on The Streets and Weeds on the Rooftops

[Warning: The below contains MAJOR spoilers for the Yellowstone Season 4 finale “Grass on The Streets and Weeds on the Rooftops.”]

Yellowstone Season 4 was building to a key moment in the finale: Beth Dutton (Kelly Reilly) pulling out a gun in a room with Jamie (Wes Bentley), who she is so certain is responsible for the attempts on her family’s lives. And oh, does “Grass on The Streets and Weeds on the Rooftops” deliver in that regard — in a way that we did and didn’t see coming.

Meanwhile, Kayce (Luke Grimes), perhaps the Dutton the most on Jamie’s side (which, to be fair, isn’t saying much), continues his vision quest and has quite the experience when it comes to one of his visitors. And Jimmy (Jefferson White) returns to the ranch a cowboy — as everyone can see — and with a couple surprises both for the others and himself.

As for Summer (Piper Perabo), who was arrested while protesting the airport on Beth’s behest, John (Kevin Costner) tries to talk to the judge, only to be blindsided when he makes an example of her rather than take the plea deal of a suspended sentence. Refusing to see Summer do serious time (at least 14 years, if she’s a “model inmate”), John confronts the judge and talks him down to eight months on the appeal.

And while it may not have ended on quite the bang of Season 3, this finale certainly left us eager to see what’s next and once again showed that it’s a real shame it doesn’t get any Emmy love (especially for Costner, Reilly, and Bentley). Read on to find out who survived and who pulled the trigger.

Following John telling Beth she had to leave, Rip (Cole Hauser) finds her packing in the middle of the night. He reminds her of the promise they made to each other and warns, “you break your promise to me, it stays broken.” So, she goes to see her dad and apologizes, agreeing to “your ranch, your rules.” Furthermore, “I’d like to stay,” she admits. “This is your home, you don’t need my permission to live here,” John tells her. But she does, and he gives it.

Speaking of homes and families, when Carter (Finn Little) greets her with, “morning, momma,” her first response is “hey, baby,” only to stop and tell him he can’t call her that. “You’ve been acting like it,” he says. No, she’s his friend, she corrects him, “I’m nobody’s mother, ever.” Poor Beth! Beth then finds Walker (Ryan Bingham) to question him about prison, including conjugal visits, and Rip clocks their conversation. If she needs something taken care of, he’ll do it, he tells her when he follows her to her car. She knows, but this one is just for her, Beth tells her fiancé.

When Beth stops by her office, Caroline (Jacki Weaver) confronts her about her role in the airport protest and talking to the media after. “I am going to rape your f**king ranch to death, and you, you little bitch, are going to prison,” Caroline warns. “Needless to say, you’re fired.”

As it turns out, Beth’s research into conjugals is because she uses the pretense of one to question Riggins about trying to kill her, John, and Kayce. That’s when she finds out Jamie visited him.

By this point, John and Rip have no idea what she’s up to, so they’re shocked when she comes home and orders them (and Carter) to join her outside … where a priest is waiting. “There’s something that I gotta do to tomorrow, and I want to be a married woman when I do it,” Beth tells John. “I don’t give a s**t about the wedding. I just care about the marriage.” (There’s something just so amusing about John’s “that’s a priest. We aren’t f**king Catholic.” Maybe it’s because of everything else that’s happened and is happening on this show.) Rip’s in, and he fetches Lloyd (Forrie J. Smith) to be his best man. John walks his daughter down the aisle, Rip sort of follows the traditional vows (but in a very Rip way), and Beth doesn’t even bother to say anything more than “f**k yes, I do” before she’s kissing her husband. Then to her surprise, Rip puts his mother’s ring on her finger. It’s hers, “and so am I,” he proclaims. As they’re celebrating, that’s when John finds out that Beth kidnapped the priest at gunpoint (“it was just a little” pistol, she explains) because of course she did. How much do you love that? (Fortunately, he’s not pressing charges.)

Beth then goes to Jamie’s office and orders him to access the Bureau of Prisons website. When he refuses, she takes out a gun. “I have done everything I need to do to never see this world again, Jamie,” she warns. “I am prepared. I will ruin my life today, and I swear to god, I’ll f**king kill you.” It’s actually pretty easy for her to log in herself for him since he uses autofill. (Really, Jamie? For the Bureau of Prisons? We’re sort of not surprised.) She shows him that she visited Riggins, and Jamie spills that he knows his father hired him and even held a gun to his head. Why didn’t he pull the trigger? Because, she says, deep down, it’s what he always wanted. But Beth also has some harsh words for the man she once called her brother. Garrett (Will Patton) may have told him he did it because he loves him but “he wants what everyone who has ever attacked us wants: he wants the land.”

And so Beth gives Jamie a choice: “Option 1, I tell my father. He will call the governor and he will have you both arrested. Your spineless, woman-murdering father will instantly say it was your idea. You know that, right? He will cut an immunity deal and he will testify against you. You will be charged with attempted murder times three and will spend the rest of your life in jail, which, actually, it won’t be that long because you’ll probably commit suicide after your first rape. Option 2, now this is a good one. I tell my husband what your father did, and he will kill him. And then I’ll tell my husband that you had his child cut from me and then you had me sterilized so he can never have a family of his own, and you, no matter where you hide, he will find you, and he will tear you apart with his bare f**king hands.” As she goes to leave, Jamie falls to his knees, begging her. “There is a third option,” she allows. And so Jamie goes home, where he finds his dad has packed. Garrett’s worried about leaving him, though. “Don’t you let those f**king Duttons deceive you into thinking you’re a bad man. You’re a good man, son. And I love you,” he says. “I love you, too, dad,” Jamie replies before shooting Garrett in the head, killing him. And then he breaks down, crying.

But what he didn’t expect is for Beth to be there to take a picture of him getting rid of his father’s body. Option 3 is worse, she tells him, because now, he’s hers.

When Beth gets home, John’s waiting with a simple question: “Did I lose a son today?” “He was never your son, dad,” Beth argues. “He’s a disappointment and my greatest failure, but I raised him and I love him as much as I’ve tried not to,” he admits. She tells him Jamie’s still alive, “but now you own him.”

As Kayce’s vision quest continues, among his visions are flashbacks to his time as a SEAL and his late brother Lee (Dave Annable), who was killed back in the series premiere. “Let me in, I can help you,” he tries to tempt Kayce, who refuses. “I’m your brother, let me help you!” (We’re not the only ones glad to see Lee back, even if it’s not really him, right?)

But it seems the right choice was not letting him in, since it’s later that Kayce once again sees the wolf and then seemingly the animal in the form of a woman, who guides him on his journey. He sees two paths, he says, and she tells him he has a tough choice, one he must make on his own. When he returns home, he tells his wife Monica (Kelsey Asbille) he saw “the end of us.” 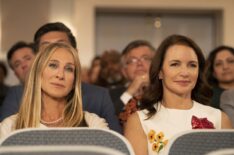 Jimmy returns to the ranch — and he’s not alone. He’s brought his fiancée Emily (Kathryn Kelly) with him, which does not go over well with his ex-girlfriend Mia (Eden Brolin). When a fight breaks out between the two women, he drags Mia outside and admits that he had a lot of growing up to do. He just didn’t do it before they met. His choice is clear.

As for his plan to work off what he owes John before rejoining Emily in Texas, the Dutton patriarch tells him, “the only person you owe is yourself. You don’t owe me a thing. … No matter what you decide or how it works out, you’ll always have a place right here.”

So where does Jimmy belong? Texas, he’s decided. “It’s just cattle and cowboys, all the way to the horizon,” he tells Lloyd, who knows he’s already a cowboy. And after that sweet conversation, all Lloyd does is tip his hat to Jimmy as everyone sees him and Emily off. “I’m proud of you,” Rip says. With that, Jimmy leaves the ranch behind … for good?