It’s been four long years, but the FIFA World Cup — the biggest single sporting event on the planet (3.57 billion people watched in 2018) — is ready to hit the pitch again as 32 nations battle it out. For U.S. players, the wait has been even longer, after they didn’t qualify for the last tourney in Russia. “[Now the team has a] responsibility to make us believe again,” says Hall of Famer and Fox Sports’ lead studio analyst Alexi Lalas.

The excitement kicks off in Qatar on November 20. The U.S. faces Wales first on November 21 in the group stage; the Black Friday match against England promises to be immense. Leading the U.S. charge is “Captain America”— gifted forward Christian Pulisic. “He has the ideal temperament for that pressure of the world spotlight,” says Fox Sports exec producer David Neal. Tyler Adams, Yunus Musah and Brenden Aaronson are also among the names to watch.

While Fox analyst Maurice Edu cites Argentina (led by GOAT Lionel Messi), Brazil and defending champs France as favorites, he believes in the U.S.’s chances to at least make it to the Round of 16. “This is a team that, when we’ve doubted them [in recent international play], they’ve performed well,” Edu says. “I wouldn’t bet against them.” Fox Sports had to spring into action when word came that the World Cup, normally a summer mega-event, would be airing during the holidays. “We’re taking advantage of the fact that fall is a more high-rated time, with a lot of eyeballs,” says executive producer David Neal. “And we wanted to make sure people knew Santa Claus was preparing for the World Cup as well.” Thus, the network’s ever-present “’Tis the FIFA World Cup” series of commercials, with Jon Hamm as a decidedly more fit Father Christmas. The ads rate a Super Bowl Sunday–level of quality, including their roster of guest stars: cameos of Tom Brady snarkily suggesting Portugal’s legendary Cristiano Ronaldo might be “getting kind of old,” Mariah Carey called upon to give us a song. Meanwhile, Santa wonders if the U.S. can’t win it all. That would indeed be a miracle. 10am/9c Group A winner vs. Group B runner-up Fox

2/1c Group B winner vs. Group A runner-up Fox 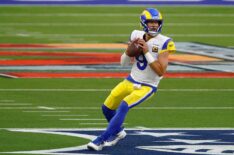