‘The Winchesters’ Was The CW’s Most-Watched Debut This Season

Supernatural fans really showed up for the premiere of the origin story of the Winchester family on The CW on Tuesday, October 11.

The Winchesters was the network’s most-watched series debut since Naomi on January 2022, according to Deadline. The first episode averaged 757,000 total viewers, and it is just behind Walker as the CW’s second most-watched premiere this season. 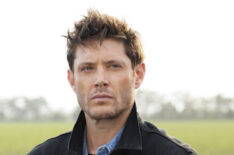 'The Winchesters': What Did You Think of the 'Supernatural' Prequel Premiere?

When the first season of Supernatural aired in 2005 on the WB, it was never a huge ratings performer. The show averaged a little more than 4.5 million viewers per episode. According to The Hollywood Reporter, Supernatural developed a strong fanbase because The CW’s first Netflix deal included seasons one through six of the series, which helped to develop the audience. The series finale drew in 1.38 million viewers.

Tumblr also helped to boost the Supernatural fandom, with Fansided reporting the series had the largest amount of engagement on Tumblr from any live-action television series.

The Winchesters is described as “the epic, untold love story of how John met Mary and how they put it all on the line to not only save their love, but the entire world.”

The series stars Drake Rodger and Meg Donnelly as John Winchester and Mary Campbell, and they’re joined in the cast by Nida Khurshid as Latika Desai, JoJo Fleites as Carlos Cervantez, and Demetria McKinney as Ada Monroe.

Supernatural star Jensen Ackles, who will appear as narrator, and his wife Danneel Ackles are also executive producers on the series.