[Warning: The below contains MAJOR spoilers for Survivor Season 42 Episode 8, “You Better Be Wearing a Seatbelt.”]

It’s day 15 in Survivor Season 42 Episode 8, and from now on, every eliminated player is guaranteed a spot in the jury. That’s right, we’ve made it past the merge, everyone. The tribes have been ditched, the buffs are purple, and tensions are high as new alliances are made.

Here, we break down everything that happened in the first post-merge episode, which aired Wednesday, April 20, on CBS, starting with the aftermath of Lydia’s elimination. “It was the right decision for my core alliance,” Mike says right off the bat, explaining his and Hai’s decision to blindside Lydia, their ally. Everyone not in this core alliance are Tori, Chanelle, Romeo, and Maryanne. Exiting the merge on the wrong side of the majority vote was a huge wakeup call for Chanelle, and Romeo confronts Drea about their different votes. Drea is in the big alliance that got Lydia out, and she reveals in solo commentary that Romeo’s increasing paranoia since the merge made her keep him out of the group.

Following a catchup with fellow Taku member Lindsay, Maryanne laments being left out of the big alliance, saying it reminds her of being the odd one out growing up. (If anyone is mean to Maryanne today, you will be dealt with!) Per Mike’s request, Omar teaches Mike about his religion for over an hour, creating a genuine bond between them. Omar sees himself working well with Mike in the long run.

Then comes some tree mail that reads, “Flying high and splashing down, a sure shot can seal the deal. If a taste of home is worth playing for, then battle for a favorite childhood meal.”

You know what that means: a reward challenge with food at the end. Tori, trying to bond with Rocksroy after sending him into exile last week and it nearly backfiring (truly, that immunity challenge saved her hide), wants to snag the reward so people will spill more tea to her over a meal.

The hourglass has been broken and the merge has officially happened!💥 See how it all plays out tonight at 8/7c on @CBS!⏳🔨 #Survivor pic.twitter.com/mqgBdXPCVy

At the challenge, Jeff Probst reveals the Beware Advantage being placed in plain sight under a bench.

“In Survivor 41, we put an advantage on this same bench almost in this exact same spot in the water, and it wasn’t found, which was a little surprising. You should be looking!” he says to viewers. “So we’re gonna do it again, only this time it is a Beware Advantage, which is much more dangerous. Because if you don’t do what it tells you to do, there is a penalty.”

Without revealing the penalty, Jeff hides the advantage and says he’ll be surprised and disappointed if no one finds it. Y’all better not disappoint the king of reality TV! In the challenge, the players are randomly divided into two teams before leaping into the water to maneuver a buoy from a series of obstacles. After all five buoys are on the opposite platform, players will shoot them into a basket. First team to finish wins the reward: PB&J sandwiches and potato chips waiting back at camp.

They draw rocks to decide the teams, and Maryanne draws the one grey rock, meaning she won’t compete. That stroke of luck (whether it’s good or bad is TBD) can’t feel good when she’s already feeling like the odd one out. But wait! Drea offers to switch, as she doesn’t like PB&J. Maryanne agrees and promises to return the favor. That places Maryanne on Team Orange with Lindsay, Hai, Romeo, and Omar. On Blue, it’s Jonathan, Rocksroy, Tori, Chanelle, and Mike.

Former Taku members Jonathan and Lindsay are first up, followed by Chanelle and Hai. Drea refuses to disappoint our dear Jeff, sneakily taking the Beware Advantage as soon as she finds it. Omar snags the lead for Orange in the basket section, but Jonathan pulls out a win for Blue before Omar can sink his last buoy. Jeff congratulates the team on their “massive come-from-behind victory” and sends the rest of the players off to the camp.

Back at the Beaches: Let Them Eat PB&J

The Blue team enjoys their reward, wrapped in brown paper bags just like a parent would make before school. Back in the loser’s circle, Lindsay, Omar, Maryanne, Hai, and Romeo bond over a job well done at the challenge. Omar continues his powerful social game from last week, gathering intel from all sides and advising people on what moves to make.

“Information is the most powerful thing in the game right now, so having eyes and ears on every side of the island is invaluable moving forward,” he says in solo commentary. Someone better catch on to the fact that Omar’s dominating this game without even having a vote before it’s too late.

How To Follow the ‘Survivor’ 42 Cast on Social Media

The 18 contestants kicked off their 26-day adventure in the 'Survivor' 42 premiere on March 9.

Now, let’s tune in to Drea, who learns the details of her Beware Advantage. And of course, it’s only a clue, not the advantage itself.

“Congratulations! You have a clue to a secret advantage that can offer you power in the game,” it reads. “It’s hidden five paces from your water well under a coconut. You must move quickly and cover your tracks or you risk being caught red handed. This is why the advantage says ‘beware.'”

She heads to the water well immediately before others gather at the highly trafficked spot, finding the advantage quickly. But as she dunks her hand into the hole where it’s hidden, she gets covered in red paint. Clearly, the “getting caught red handed” warning was literal. She cleans her hand at the well and reads her advantage. 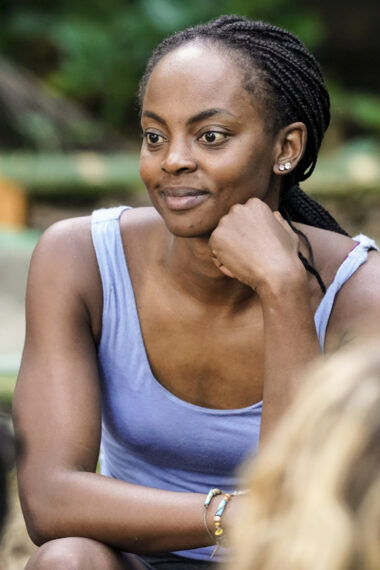 “The Knowledge is Power Advantage. This advantage offers you power in the game,” it reads. “You’re allowed to ask one player either of the following two questions: Do you have an advantage, or do you have an idol? The player cannot lie.” If the answer is yes, Drea gets their advantage or idol for herself.

This makes Drea’s Survivor riches even more plentiful: she already has an extra vote, an amulet, and an idol. Now, she can take someone else’s. And nobody has any clue just how many advantages she has under her sleeve. Mike and Maryanne have idols as well.

“Now it’s about strategizing how to use the items so that it best fits my game and so I don’t become a threat,” she sagely says. “That’s really important to me.”

Tori notices the red on Drea’s arm immediately, and she tries to play it off by saying she was painting a flag. Tori shares her suspicions with other players, and Drea makes a private plot to get Tori out. The second individual immunity challenge of the season delivered another parallel with Survivor Season 41.

“In Survivor 41 at this exact same point in the game, we gave the players the option to sit out of the challenge in exchange for an individual portion of rice. It led to a group negotiation where four players agreed to sit out in exchange for enough rice for everybody for three days.”

This time around, they’re offering enough rice for everybody for four days, and Jeff wants to get six players — more than half of the entire group — to sit out.

“I’ll settle again at four, if they push hard enough,” he shares, “but lest you future players think, ‘Oh, I’m an easy negotiator,’ just remember, history is merely an indicator of what might happen in the future. Next season, the monster may have a much, much bigger appetite.” Jeff, I’m shaking!

For the first time ever an Immunity Challenge was stopped to protect the contestants. Here's why.

The challenge: players balance on a perch while holding a buoy between two handles. If the player or buoy falls off the perch, they’re out. Winner is guaranteed a spot in the final 10, and whomever is sent home is the first member of the jury. Jeff asks who’s willing to give up their shot at immunity in exchange for the rice, and the negotiations begin.

The tribe members negotiate with Jeff, who’s vocally gunning for six. Drea and Lindsay volunteer, whereas Mike “came here to play.” Maryanne volunteers herself, and the tribe and Jeff agree to four. Only problem is, no one will volunteer for the fourth spot.

In a group huddle, Maryanne ups her social game by imploring the group to take one for the team. She says she knows she’s in the bottom, but is choosing to sit out so the tribe can eat, taking the bet that putting herself at risk like this will pay her back in kind. In solo commentary, Maryanne reveals she used her “emotional” reputation to her advantage in this moment to make “people feel bad about trying to vote me out.”

“People say you can’t play this game with emotion, but look at me, using emotions as a weapon,” she says. YES, Maryanne.

Omar volunteers as tribute, leaving Tori, Jonathan, Mike, Hai, Chanelle, Rocksroy, and Romeo competing for immunity. Hai is out almost immediately, and after a quick succession of eliminations, Tori, Jonathan, and Chanelle battle it out for 10 plus minutes.

In the end, Tori wins for the second week in a row, making her the only person this season to wear the individual immunity necklace. And it’s good she keeps winning, because she’s on everyone’s elimination list. Tori may be great at balance challenges, but let’s see how much longer she can balance her physical and social games.

Tori’s safety thwarts Drea’s plan. And no doubt, Tori will try to nix Drea now, but those advantages of hers are a big safety net. It seems Maryanne’s sacrifice is starting to pay off: Hai immediately says he’s grateful for the move she made for the rice, and she’s not seriously considered as an elimination target. Hai and Mike both want Chanelle out, as she hasn’t repaired the broken trust between them all.

“Chanelle is the actual vote, however, we told Chanelle to vote Romeo, because if she has an idol or potentially plays her shot in the dark, our plan is screwed,” Hai says. Chanelle plans to vote Romeo and tries to conceal her worry. Romeo has a harder time concealing his, and it affects his conversations with other players. He won’t believe he’s safe, which is typically a smart move, but he’s putting his foot in his mouth by refusing to trust anyone and displaying that distrust in conversations. They’re all planning on Chanelle, but Romeo is inadvertently advocating for his own elimination. Romeo, Romeo, why are you ruining your game, Romeo?

The paranoia becomes too much for everyone, and campaigns to vote out Romeo begin. But Mike still wants Chanelle out and advocates for keeping the original plan.

Hai may have revealed their Romeo plan with a comment in Tribal Council. But in the end, no one plays any idols or shots in the dark. And after some quippy comments before the votes began, the first vote surprisingly goes to Hai. Second goes to Romeo, and third goes to Chanelle.

Romeo and Chanelle are tied at three votes each, but Chanelle gets a fourth and fifth vote. And with one last vote, Chanelle is eliminated, making her the first member of the jury. But Romeo’s social game will likely come back to bite him. Next week, two players will be eliminated. Be careful what you panic over.

You Better Be Wearing a Seatbelt