What better way to keep a guy’s mind off the possibility that his cancer has returned than with a game night introducing exes’ new girlfriends to the friend group? Such is the case for the latest A Million Little Things.

Katherine (Grace Park) brings Greta (Cameron Esposito). Eddie (David Giuntoli) brings Anna (Erin Karpluk). Yep, it’s an interesting game night as Gary (James Roday Rodriguez) waits to find out if his cancer is back. Fortunately, it’s not—and he and Sophie (Lizzy Greene) are on better terms after he helped kidnap the man who assaulted her, Peter (Andrew Leeds), as a result of the scare.

“Fingers Crossed” marked creator DJ Nash’s directorial debut—he also wrote the episode with Michelle Leibel. “It was probably our most comedy-heavy episode we’ve done. And I remember thinking—[we had booked] a director new to us—’I hope he knows comedy.’ When you hire a director for a drama, they don’t always know comedy,” Nash explained to TV Insider. “And so when he fell out, I said, ‘Wait a minute, this is the one [for me] to do.'” Everyone, including producing director Joanna Kerns, cinematographer Robin Lindala, and editor Alyssa Carroll, rallied around to help.

Nash takes us inside the episode and teases what’s ahead.

Talk about having this scare for Gary now. Was it primarily to push his relationships with himself, Maggie (Allison Miller), and Sophie forward?

DJ Nash: It’s really kind of profound. When I was up there directing, a man died in the lobby where I was. When I walked out of the elevator, EMTs were on top of him trying to resuscitate him, and he passed away. It was so upsetting. I went to set the next morning, still shaken, and said, “I feel like I wanna write about it,” and everyone looked at me and said, “That’s what your whole series is about—what are you talking about?” And it is true. The series looks at the death of one person as this catalyst for everyone to make a change. As Gary said in the pilot, people say they’re gonna live differently and we’ll do that for exactly three weeks and then we’ll be back to doing the same stuff we always do. I think this is a reminder to Gary that life is short and it does make Sophie realize that. As she says, “As mad as I am at you, I need you in my life even more.” And so it did speed things along for this friend group once again.

At the end of the episode, Gary says he and Maggie should move back in together, and she says she thinks they should have a baby. So is she moving the timetable up?

Oh, for sure. Yes.… Like a lot of our stories, they come from personal experiences in the writers’ room, and a number of us had difficulty getting pregnant. It is both a beautiful thing but also a stressful time, and when you go through that process, it is full of so much emotion: You are loving the other person enough that you want bring a new life into the world, but as you struggle to get pregnant, it can test every part of the relationship. Eddie and Anna seem to be in a good place, but there is the matter of the timing with his sobriety. In the next episode, there’s an awkward encounter with Peter. What’s coming up?

The amount of hurt, pain, and trauma that Peter has caused seems endless. When someone has a traumatic event like assault happen to them, obviously it affects the survivor, but other people are also so deeply affected. Anna, who knew nothing of what was happening with Peter, had said to Gary earlier in the season, “Every person who was on that clipboard coming to audition, I can’t help wonder how many people he hurt.” So she’s dealing with that guilt. She’s dealing, as we already saw, with some mistrust, understandably, going forward with her relationship with Eddie. And Eddie is trying to be the most supportive person to his new girlfriend, as he’s now calling her, that he can be while still managing and struggling to retain his sobriety.

I also want to acknowledge how funny Erin was as Anna in the episode I directed.

She was so good!

That game night stuff, it was unbelievable and funny. Right from the table read, she just got it. Every time I’ve seen her since then, I’ve been meaning to ask her who she was thinking the clue was when she did that gesture like it was Snuffleupagus or something. I always joke that no one has friends like this, they’re really, really close, and I think the hardest thing about a friend group like that is being the new person. I just thought she portrayed that so authentically. Katherine and Greta got past the “meet the friends” part, but talk of Greta’s ex makes me think she could become a major factor soon.

Yeah, she will be. Every question you have asked me about so far, you have to decide how much your history is gonna inform your future and in what ways. Are you going to make changes to be different or does history repeat itself?

It’s so funny because the character I align with the most is Katherine, and when I read stuff on social media—which isn’t that often—people are always pushing for her to have happiness and the support she deserves. It has always been our plan to take her on a journey where she finds her soulmate, but that doesn’t come without challenges.

When I was up on set—and it was the first time I was with the cast on set in two years because of COVID—I was so touched by Grace Park and how nurturing she was of Cameron Esposito. I had a soft side for Cameron because I’m a former standup who tried acting. Grace just took her under her wing. It was great. And it made it so authentic [that she did it the] way Katherine would take Greta under her wing coming to this new, intimidating friend group. That line about the glass—”It’s a pretty aggressive way to pick up glass”—was a line Cameron improv-ed, and it’s just so fun to work with someone who sort of approaches comedy in life the way I try to. 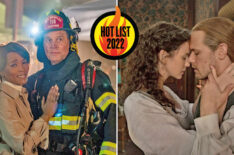 What else can you tease is coming up? Anything about Delilah (Stephanie Szostak)?

The pressure of being away and having Delilah away gets to this friend group and this family in a significant way. We’re in line to have our biggest cliffhanger of the series, and this is coming off of a pretty big cliffhanger last season. We’re really excited about where we set the friends up and the stories we’re thinking about for next season.

I was going to ask—because the show hasn’t been renewed yet, is that affecting how you’re planning the rest of the season? But it sounds like you’re planning for another round.

We had a very direct conversation with a bunch of folks over at the studio and our partners at the network on very high levels about [whether we] do a cliffhanger or are we doing another season, and everyone pushed for us to not finish up the story. I am excited for what Season 5 would be. I talked to people recently about, do we shoot one scene that wraps things up? Or what? Everyone has really pushed for us to stick to this cliffhanger. The way the writers’ room [tells] that story is really, really moving. I was there for the shooting of the finale, and it’s some of the best performances I’ve seen from this cast. Everything with Regina (Christina Moses) and her parents has been so intense. How will that affect her going forward?

It really goes back to how much your history is gonna inform your future. Regina is a mom now, and she has a son who will either make some of the same choices she made or make different ones. Rome and Regina were thinking they would have a newborn child, but having this instant family that came with having Tyrell, an 18-year-old, in your life—they have this young adult that they could lean on. There are some pretty moving scenes for how that affects them. Also, Rome has another story arc that’s loosely based on one of the writers in the room about encountering some tough things that happened in high school. Just when I think I can’t be more impressed with Romany Malco, he outshines himself.

The entire cast is so good this season.

It really is. I think the episode that you just screened is David Giuntoli’s strongest performance of the series so far. The scene with James and Romany where they did not move until the hug and then even going from that hug, which was so beautiful, to the line “Are your privates touching my privates?” That was so true to our show—that just when you think it’s gonna be dramatic, it’s comedic, or just when you think it’s comedic, it’s dramatic. That formula is definitely ever-present in our finale, and I can’t wait for fans to see it.