[Warning: The below contains MAJOR spoilers for NCIS Season 19 Episode 11 “All Hands.”]

There’s nothing like a little trauma to bring a team together.

As “All Hands” begins, Director Leon Vance (Rocky Carroll) checks in to see how Special Agent Alden Parker (Gary Cole) is doing with the move from the FBI. “This place has been amazing,” he says. “I’m happy with the team.” But Vance notes he doesn’t call the team his. It hasn’t been that long, Parker explains. “Director, these people have been working together for years. I’ve been here five minutes. I’m not ready to call anything mine,” he says. “It’s like dating. I’ve met someone, someone great, but me and that someone still have to fall in love with each other before we start sharing bath towels.”

The case interrupts, and back at the office, Timothy McGee (Sean Murray) knows that they may need to step outside the legal box to get pertinent information. Vance takes him to the elevator. “I think Gibbs would prefer if you did the honors,” the director says, allowing the senior agent to stop the elevator as his former boss was apt to do. Vance can’t let him go too far, but does direct him to the cyber team due to one of its current assignments. Then, even with the others out at sea, McGee and forensic scientist Kasie Hines (Diona Reasonover) are able to decipher a message of emojis from Parker on the team’s app.

Meanwhile, Parker, Nick Torres (Wilmer Valderrama), Jessica Knight (Katrina Law), and Dr. Jimmy Palmer (Brian Dietzen) head out to a civilian research vessel to find out how one of a black ops team that ended up on the ship died. Only, once there, they discover that those Navy officers are fake, and the team must hide. Then, nothing says trust like splitting up when necessary and having everyone do their own thing and team bonding like sneaking around a ship, facing torture and death at the hands of people who turn out to be dirty former military contractors, putting your lives in each other’s hands and risking yourself for the others, and trusting your team to find you. Ian Maddox (Grant Harvey) and Dutch Naga (A.J. Meijer) capture Knight and Torres as they search the vessel for weapons and reinforcements, and both are bloody and bruised when they’re put in the same room again. Parker finds them by crawling through the vents before luring away the gunmen (“they can’t do this to you,” he tells his agents) with the tease of what they want: the helicopter’s keys. (It turns out they want to sell the aircraft.) But then as the team discovers, Parker hides in the back of the helicopter when they take off. So how do they find him? Parker is able to broadcast the Star Trek theme, using one of the real pilot’s iPods, and as he expects, McGee picks up the clue after the two talked about the franchise earlier.

Once back at work, Parker tells Vance what he did was more a “calculated risk” than a “death wish,” as the director calls it. “One way or the other, I was getting my team off that ship,” Parker explains. Vance notes the use of “my.” 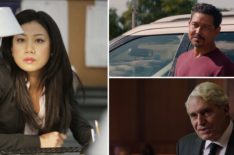 The episode is capped off with documentation of the team as Knight gathers everyone, including Vance, to take a photo with a paper doll — taped back together after being ripped up during the investigation — for her niece’s class.

So while it may never be the same as when Leroy Jethro Gibbs (Mark Harmon) was leader, do these agents feel like a team yet to you?