How ‘NCIS’ Continues to Keep Gibbs Part of the Story (RECAP)

[Warning: The below contains MAJOR spoilers for NCIS Season 19 Episode 10 “Pledge of Allegiance.”]

Who sent Special Agent Timothy McGee (Sean Murray) and Dr. Jimmy Palmer (Brian Dietzen) $10,000? That’s the question for the latest NCIS episode, and yes, it does lead exactly where you expected.

Near the beginning of the episode, Special Agent Nick Torres (Wilmer Valderrama) is surprised to find McGee trying so hard to contact his bank account about that large sum mysteriously added to his account. Then, about halfway through the hour, Special Agent Jessica Knight (Katrina Law) reveals to McGee that he’s not the only one who received that amount; Palmer did, too. (She and Torres, however, did not, no matter how many times they check their bank accounts.)

Once Palmer notes that it was earmarked for his daughter, Victoria, the pieces begin to come together (at least for us). But the bank still won’t tell him who deposited it. That’s where Director Leon Vance (Rocky Carroll) comes in.

After the case is wrapped, Vance has McGee stay behind in his office and calls Palmer to join them. They figure it’s about the money — though don’t know why — and Palmer even worries that they might be in trouble. That’s not it at all, Vance explains. Rather, they’re the newest members of the Leroy Jethro Gibbs College Scholarship Club. Yes, the money is from Gibbs (Mark Harmon, who exited in Episode 4 this season). “It’s way too generous,” McGee says. But Vance tells them they can’t give it back, as he’s learned by trying to do so himself. Gibbs donated to him, too, when his kids were the same age as theirs. 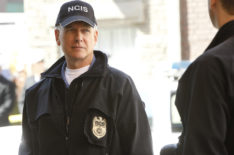 “It’s in memory of his daughter Kelly,” the director explains. “When she was young, he started a college fund. When she died, Gibbs never closed the account. In fact, he kept adding to it. Since then, he’s helped a lot of agents’ families. Kids all going to college in Kelly’s honor.”

“What a legacy,” McGee says, and Palmer wishes he could thank Gibbs in person. “Hopefully one day you will,” Vance says. Now, we just have to wonder when that might be.