‘Chicago Med’: How Did Will Return to the ED in the Season 7 Premiere? (RECAP)

You Can't Always Trust What You See

[Warning: The below contains MAJOR spoilers for the Chicago Med Season 7 premiere “You Can’t Always Trust What You See.”]

Surprise — Chicago Med actually officially says goodbye to one of the original cast members we thought left at the end of last spring’s finale in the opening scene of the Season 7 premiere. The episode also reveals just how Will (Nick Gehlfuss) will be rejoining the hospital staff, and he’s not entirely comfortable with it.

First, Will helps Natalie (Torrey DeVitto) pack up her car and sees her and her son off as they move away. It seems he takes her advice that he needs to return to the hospital because he calls Sharon Goodwin (S. Epatha Merkerson).

Lucky for him, this comes as she’s questioning another doctor’s (Michael Rady‘s Cooper) usage of a cardiac output monitor. It’s a pricy machine, and other monitors are just as good, Will tells Sharon. She worries they’re looking at fraud and a nonessential invasive procedure that puts people at risk if Cooper is using it unnecessarily, billing Medicare, and getting kickbacks from the monitor’s company. Since Will knows Cooper after dating his cousin in the past, Sharon wants him to get her something solid (like an admission of wrong-doing), preferably on tape, since she’ll need something to bring before the board. (Cooper’s father-in-law is on it.) Will is hesitant, but Sharon makes it clear that he must do this if he wants his job back.

So Will does take the first steps in reconnecting with Cooper, engaging in small talk and suggesting they get a drink to catch up. And the other doctor finds Will as one of his patients is in surgery and suggests the monitor as a possible treatment. But in the end, Will goes to Sharon and tells her he can’t do this for her and if his staying is dependent on it, he’d rather work somewhere else. However, she then shows him the patient file of a 23-year-old man who lost his leg after developing an infection after receiving the monitor. If it was an unnecessary procedure, it’s a tragedy that never should have happened. It seems Will is on board after hearing that. Also in the premiere: 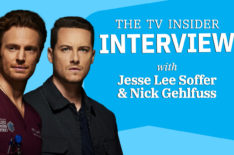