Ten years ago, executive producer/creator/writer Mike Kelley (Swingtown, What/If ) rejuvenated the primetime soap opera with the ABC series Revenge. The serial drama, which debuted September 21, 2011, and quickly became a guilty pleasure, told the story of Emily Thorne (Emily VanCamp), a former Hamptonite who returned to seek revenge against the wealthy Grayson family and their various hangers-on.

Armed with a burning desire for justice, unlimited financial resources, and a pack of red Sharpies, Emily (born Amanda Clarke) eliminated individuals who had framed her father, David Clarke (James Tupper), for conspiring with the terrorists who brought down Flight 197, killing all 247 souls on board. Emily couldn’t account for every contingency, but the fun was watching her take control and remain two steps ahead of her adversaries—especially Victoria Grayson, played by the unparalleled Madeleine Stowe. TV Insider sat down with Kelley for a retrospective, focusing on Revenge‘s first stellar season. Read on for some insights into the series that recaptured the love TV viewers have for the nighttime soap.

How did you develop the show? I know The Count of Monte Cristo was the inspiration, with Emily as a version of Edmond Dantès. Only Emily’s dog Sammy recognized her.

Mike Kelley: I had done the series Swingtown on CBS, and I was working on a script for ABC. Paul Lee had come in as the new network entertainment president, and I got a call saying he wanted to program a big, fun soap opera. Can you come up with a big nighttime soap opera? I went back home and sat down with [writer] Joe Fazzio. I read through The Count of Monte Cristo and came up with counterparts for the characters.

The Hamptons setting had been pitched to me. Joe helped me come up with that. As for Sammy, I’m dog-obsessed. Sammy told us that Emily was worthy of love and affection so the audience wouldn’t have a problem with what she was doing. At the time, my dogs were getting quite old. I had to put [one] to sleep during the course of the first season. It was very crushing. I knew where I was taking Sammy’s story and that he’d bring Jack [Nick Wechsler] and Emily closer together. Each episode ended with “I can’t wait to see what happens next!” That’s just what TV should be.

Thank you. It was a high-wire act for sure. We did 22 episodes the first season and the network wanted more. I had always seen the show as a 60-episode series to keep the integrity of the story. We had six act breaks in each episode and we wanted to come up with a twist to keep people coming back with each one.

We learned in Episode 15 that it was Tyler (Ashton Holmes) who was shot dead — not Daniel (Josh Bowman), as was teased. Was it ever going to be Daniel?

I had fully expected Revenge to end after 13 episodes just as Swingtown had done, so I set up a complete story. At the time, I left myself the room to kill Daniel. I figured that would be it. However, it became clear early on that the show was a hit, so I had to make an adjustment. Emily’s whole plan was to put an amount of pain on Victoria equal to that [which] had been put on her. I wasn’t sure exactly how, but Emily would have been responsible for Daniel’s death—I always wanted her to steal from Victoria the person she loved the most.

Another reason Daniel lived was that his and Emily’s romance became substantial. He was a person worth rescuing. I had a great team of writers, especially Mark B. Perry. At the end of the day, I instinctively ask, “What does the audience want to see?” I want to be a fan of the show as well as its author. Trust was a major problem for her. If she wasn’t capable of feeling love, the show wouldn’t have worked. She felt it for Daniel and also her daughter Charlotte [Christa B. Allen], but she’d been damaged by her own mother, who taught her to see men as stepping stones to security.

Victoria made two bad decisions. She loved Dominik [James Purefoy], the artist, but she saw security with Conrad [Henry Czerny]. And she fell for David, but then she made the worst decision of her life by betraying him to protect her own brood.

Did her guilt over that betrayal lead to Victoria immerse herself in so many charitable endeavors?

Yes. She kept trying to fill that big, empty cup.

The dialogue on the show was sharp and lyrical. Emily asked Victoria if she minded if she started calling her by her first name. Victoria responded, “Of course.” That could be taken both ways.

Yes. “Of course, I mind,” and “Of course, you can.” We tried to do as much double entendre as possible without making it comical, but we also didn’t mind when it was comical. We wanted everyone to have a fun time. When I was a kid, I fell for Knots Landing and the character of Abby Ewing [Donna Mills] in particular. She was a woman who could be quite vicious but was very glamorous and a woman of few words. She didn’t need to say much to make an impact. I loved that. Revenge truly was the return of the nighttime serial.

I wanted to honor the nighttime soap opera that I remembered. A lot of that dialogue is homage to the outsized way of speaking. Emily and Victoria would have these battles of wit and verbiage. I got lucky with both actors. They were so committed to their characters. I want to take credit for the template, but we found it in tone with the actors, the writers, and in the edit bay. If you’re lucky, you find it, and you follow it.

Even in moments of great animosity between Conrad and Victoria, they’d exchange a knowing smile; they’d banter as only true partners can.

Conrad and Victoria understood each other in many ways. Henry’s another fantastic actor. His dynamic with Madeleine was a special gift. They had a family therapy session in one episode and said things like, “I hear what you’re saying and I want you to know…” It’s one of my favorite scenes mostly because of the way Henry plays it. They were great together.

Was Victoria’s relationship with Charlotte strained because her daughter was a reminder of how she betrayed David?

It was. Also, there was a template set with her own mother. I wanted that mother/daughter dynamic to be “thorny,” if you will. 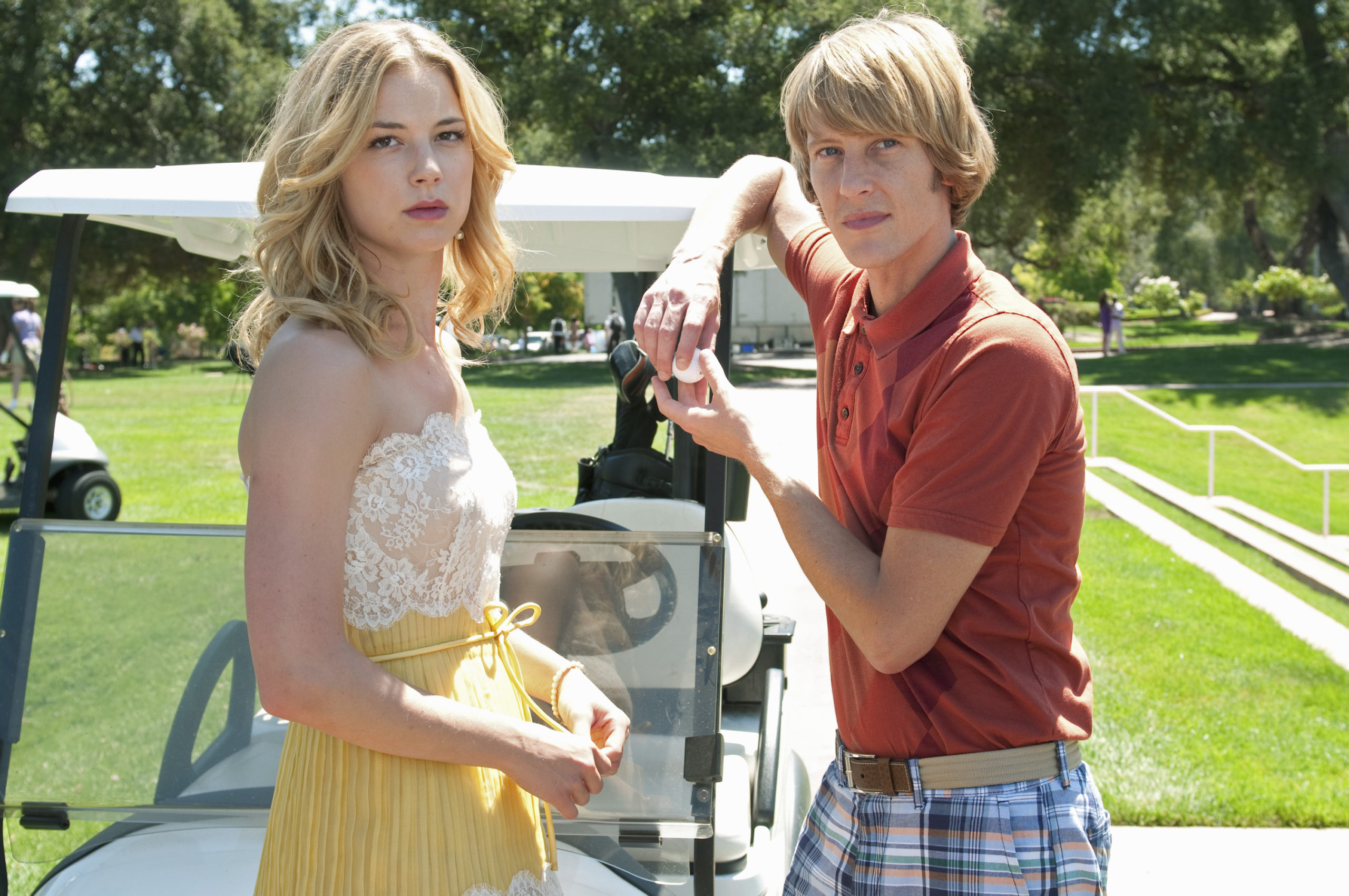 Tech guru Nolan (Gabriel Mann) had all that money, yet all he really wanted was—

—family. For a while, Nolan would get close to having a family and establishing trust, and then the rug would get pulled out from under him. Gabe is terrific and a sweetheart, too.

Those characters lived in my head and in the heads of my writing staff. [Writer] Mark Perry had Victoria stalking him inside his brain. Nolan had great specific dialogue. I’ll hear things that almost sound like a song. I know when it feels right. Once you get into the swing of a character like Nolan, it’s just fun. He was a hoot. Emily was trickier in that she was conditional with whom she was talking to. She chose her words very carefully.

Did you have a memorable dialogue exchange from Revenge?

At one point, Emily tells Nolan she’s decided to give up her revenge plan. She goes to tell Daniel, only he first says that his mother told him that David raped Victoria [which he had not]. Emily sees red. Then, Daniel [rhetorically] asks Emily if she still wants to marry into his crazy family? She smiles and says, “More than ever.”

Victoria did not want Charlotte to end up with Declan Porter (Connor Paolo)!

She was afraid of Charlotte feeling true love, knowing what kind of pain can come from that. That struck terror in Victoria’s heart not just because she’s an awful person but because she knows about heartbreak.

When Victoria threatened to “destroy” other people, it was almost as if she was saying she couldn’t control herself. After all, she destroyed David, whom she loved.

Victoria had her emotions roiling inside her at all times. Emily was able to cauterize her emotions. She could be more tactical. The two women were birds of a feather in some ways. Jack and Declan each turned down bribes from, respectively, Daniel and Victoria. Can you talk about having moral characters who were also “have-nots”?

You’re always going to have that “class clash” in a tried-and-true soap opera. I did a little research on the Hamptons and Montauk and what it’s like for working people who bump against these people who have no end to their finances. It was important for me to have those two brothers who made sacrifices for each other, their father, and their loved ones.

One wild card that Emily couldn’t control was Amanda (aka the real Emily).

Emily needed obstacles that were real. Also, having Amanda fall for Jack was another fun element. We didn’t realize how long we were going to keep her, but the actress, Margarita Levieva, was just so great.

In the time-jumping episode “Legacy,” we see Victoria and David meet in the 1990s; in 2002, Emily infiltrates a Grayson New Year’s Eve party.

There were practical reasons for doing those flashback episodes. They were like little plays of characters you already know. We showed Victoria when she could still feel love and we showed Emily when she was a little rougher. It’s better when you can fill in the blanks of someone’s life.

Tyler was obsessed with Daniel — maybe even in love with him?

Tyler was heartbreaking. He did have elements of The Talented Mr. Ripley. I love the actor who played him. He took the work and his character very seriously. Tyler had real feelings, but Daniel wasn’t available to him and never would be—nor was Daniel’s life that Tyler coveted. Was there anyone else involved with the show I haven’t asked about?

I have to give a shoutout to iZLER, who composed the music. I don’t think the show would have worked without his score. [Director] Phillip Noyce did such a great job setting the template with the pilot. It was Hitchcockian, noir, and lush. I owe them both a big debt of gratitude. I’ll be out getting coffee and I’ll hear someone’s ringtone be the Revenge theme.

What has this show meant to you?

I look back on it and I feel a lot of gratitude to all the people I worked with and to ABC. In between Seasons 1 and 2, I went to Italy and visited a place famous for glassblowing. There’s a gallery where you can buy a tchotchke. A translator with me said the merchant wants to know if I was the same Mike Kelley who created Revenge. I said, “You’ve got be kidding me.” We took some pictures together. I ended up taking a little trip around the globe and found all these cultures that had been exposed to the show. Revenge resonated culturally all over the world. What a gift. Who gets to have that experience?

Revenge where to stream

Swingtown where to stream