Season 4 of New Amsterdam is all about “More Joy” (hence the premiere title), and Max (Ryan Eggold) and Helen (Freema Agyeman) have (finally) found that in each other. But where might that take them? Apparently away from New Amsterdam.

With Helen wanting to take the job as medical director at her former clinic in London, it looks like the beginning of the end for the couple on their first night together! But “I love you,” he declares for all of New York to hear. (She replies in kind.) And so by the end of the premiere, he’s decided he’s going to London with her.

And he means that. “In Episode 2, Max tells everyone that he and Sharpe are leaving,” executive producer David Schulner says, insisting the two are going to London… eventually?

Read on as Schulner breaks down the premiere and what’s next for Sharpwin as well as the rest of the NBC drama’s doctors: Reynolds’ (Jocko Sims) continued complicated relationship with Lyn (Frances Turner), Bloom (Janet Montgomery) and Leyla (Shiva Kalaiselvan), Iggy (Tyler Labine) in his new position, and (hopefully) the newest member of the staff, Wilder (Sandra Mae Frank).

You definitely did give us everything from Max and Helen — their first night together, first major fight, first “I love you,” first major decision together… What was your goal with them in the premiere?

David Schulner: Just to let them celebrate each other. I think we’ve all been waiting for this moment for so long and I’ve had to lie about it for so long — all the questions about Max and Sharpe and the love triangle and do they love each other and all this stuff. I can’t tell you guys the truth. I have to wait for Max and Helen to tell everyone. Me ruining the surprise would just be awful. So it was a great burden to get off my chest too. Because maybe even more than it was for Max and Sharpe, it was pleasurable for me to stop keeping this in. That “I love you” declaration was so sweet. They needed it, and fans needed it.

Max dropping the bombshell that he’s going with Helen to London ­— that’s another way to say “I love you.”

Talk about Max’s decision. Was it something he was considering a while or did his conversation with Dr. Wilder spur him into action?

I think Wilder gave him the opportunity and reminded him of everything he’s been talking about, that we should all be following our joy. And he managed not to take his own advice until really, she gave him permission both emotionally and by him being so impressed with her and realizing that she could take over New Amsterdam when he was gone. So she gave him permission in many ways. What can you tease about what’s coming up with that possible move for Sharpwin? I don’t think you’re going to be splitting time between New York and London, so should we be expecting a time jump that brings them back to New Amsterdam?

No, Max is going to London. Max and Sharpe are leaving. I want to believe Max when he says that he’s going.

But something has to happen. So we’re actually going to see them packing up to leave in the next episode?

What would you say Reynolds and Lyn’s relationship status is by the end of the premiere?

They’re back on. But they’ve got some issues to work out. Reynolds, Lyn, and Baptiste (Andre Blake) are quite the interesting triangle because it’s about more than just romance with the professional aspect. How complicated is that going to get?

So complicated. The most complicated. Floyd spends more with Baptiste than he does with Malvo, just because — I spend more time with my work family than my real family. So it’s just a super messy, juicy, complicated, soapy ride that they’re going to be on.

Because it’s one thing to have an open marriage, but then to find out that your wife’s involved with someone you’re spending all this time with at work…

Yeah. And Reynolds totally did the right thing by cutting it off as soon as he found out that they were married, that his new boss was married to his paramour, and he did the right thing and then he just couldn’t resist. He just couldn’t keep that separation. Something had to give. … We also really want to explore the reality of why people have open marriages and not play it for laughs or not play it just for the soap, but to really explore a different kind of relationship that we don’t get to see on television a lot. Former patient Mary (Isabel Keating) says to Iggy, “When does the white knight stop trying to save everybody? When he stops believing that people can be saved.” How much are we going to see that weighing on him as he tries to stick to his new role as psych residency director and not seeing patients?

Yeah. Because he’s teaching people who could end up on the same path he did.

Yeah, absolutely. And he’s never done this before. So he really is starting at the bottom. He’s a beginner for the first time which is so exciting for us to write and for Tyler to play. We’ve watched him be the absolute expert in his field and now he’s starting over.

And then Bloom and Leyla have made it past one challenge with their relationship in the premiere. But there’s still the fact that Leyla doesn’t know how she got that residency spot. What can you tease about that?

There are so many fun stories to play with them and so many minor problems that they have to work through before we want to force them to confront the big problem. 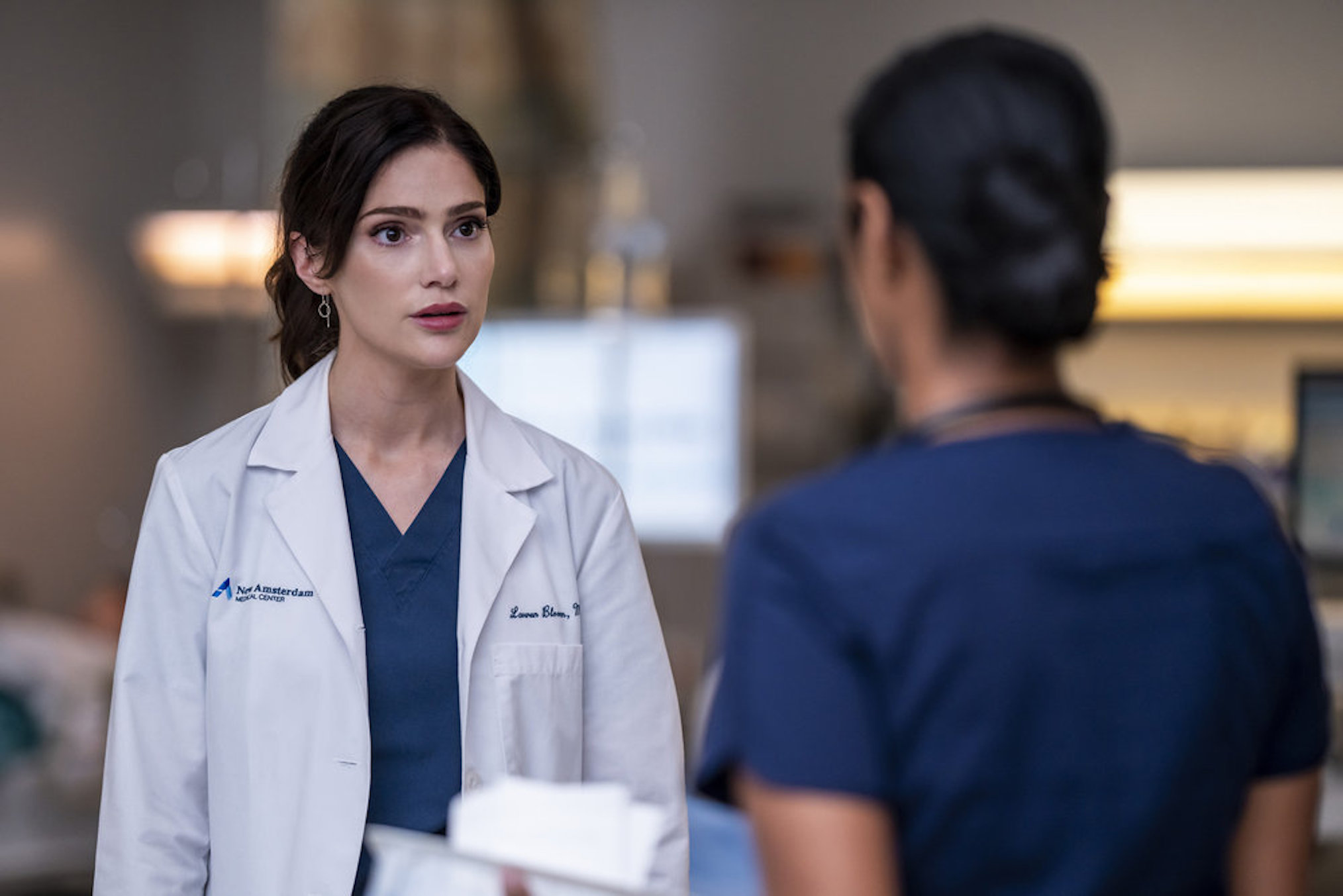 Are we going to see Leyla with any of the other staff?

Yeah. She’s going to be interacting with a lot of people going forward, including, spoiler alert: Bloom’s mom.

Oh, I can’t wait to see that. How does that go?

[Laughs] It is so far one of my favorites storylines we’ve done. I just watched the episode now. Janet is heartbreaking in it and Gina Gershon is phenomenal and Shiva’s just luminous. It’s a beautiful storyline and a great, great episode for them.

And is that going to bring Bloom to see Iggy for some advice and therapy?

She goes to him earlier than that episode, when she’s worried that she’s replaced one drug for another, meaning Leyla. I love the character of Dr. Wilder already with just this one episode. What are we going to see from her going forward?

We’ve fallen in love with the character, too. And we’ve fallen in love with the actress, Sandra Mae Frank. She really is Max. She’s as close to Max as any character we’ve introduced on the show, which is why I think Max feels so comfortable with leaving New Amsterdam in her hands, if she would only say yes, which she doesn’t. And Max feels like, how can he leave New Amsterdam without a successor in his place? So getting Dr. Wilder on board becomes a top priority for him.

How crazy does Max get in his attempt to get her to say yes? Because I can just imagine Max running and doing all sorts of things.

Yeah. We broke those stories too in the room. Things keep going wrong at New Amsterdam which prevents him from mounting the full-on charm offensive that he would like to. And she keeps saying no to every opportunity he presents. So it’s going to be a while before she says yes.