“Oh my God,” Jamie Dutton (Wes Bentley) exclaims in the Yellowstone Season 4 trailer. Has he realized he’s made a big mistake turning his back on his family — remember, he told Rip Wheeler (Cole Hauser) he shouldn’t call him anymore — even if he just found out he’s adopted? (Probably not. It’s Jamie.)

There’s a lot going on in the new preview, which begins with a reminder of how Season 3 ended: John Dutton (Kevin Costner) shot on the side of the road, his daughter Beth’s (Kelly Reilly) workplace exploding after she was mailed a bomb, and his son Kayce (Luke Grimes) under fire in his office. So are we (very) worried when we hear “officer down”? Yes, but we also think it could be a misdirect.

We have a feeling all three Duttons will survive — Rip does find John — but that doesn’t mean the danger is anywhere near over. In fact, it looks like it’s coming home, with something going down on the ranch. (Speaking of, Jefferson White’s Jimmy, who got back on a horse in the Season 3 finale despite previously suffering an injury, isn’t looking good.)

Meanwhile, as you’ll recall, Jamie decided he wanted to get to know his biological father, Garrett Randall (Will Patton, upped to series regular), who suggested Jamie should be running the family ranch. Now, in the trailer, he says, “Fair. Moral. Those are words men invented to scare and shame other men from taking back what they’ve stolen.” But “what about right or wrong?” Jamie wants to know, his hand shaking as he holds a gun. “There’s no such thing,” Garrett says.

Watch the trailer below for more, including a look at some of the new characters.

Yellowstone also stars the returning Kelsey Asbille, Brecken Merrill, Forrie Smith, Denim Richards, Ian Bohen, Ryan Bingham, and Gil Birmingham. Finn Little joins as a new series regular in the role of Carter, a young boy reminiscent of a young Rip. Beth decides the ranch is the best place to teach him a lesson on how to be a man.

Jacki Weaver, Piper Perabo, and Kathryn Kelly will recur. Weaver plays CEO of Market Equities Caroline Warner. Perabo’s Summer Higgins is an outside protester from Portland against the state-funded police force protecting industrialized farming and the killing of animals. And Kelly plays Emily, a vet tech who strikes up a relationship with the new cowboy. 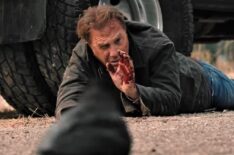