Roush Review: Emerging Once Again, Hilariously, From the ‘Shadows’

Any Spider-Man fan knows that with great power comes great responsibility. But even a smidgen of unearned power has an endless potential for disaster, like when the delusional and merrily deranged Staten Island vampires of FX’s giddy horror farce What We Do in the Shadows get an ego boost of leadership status in Shadows’ hilarious third season.

Turns out they’re better off in the shadows where they can do less damage — although this wickedly funny series deserves to move beyond cult status into the spotlight among TV’s top-tier comedies. These goofy ghouls are golden. 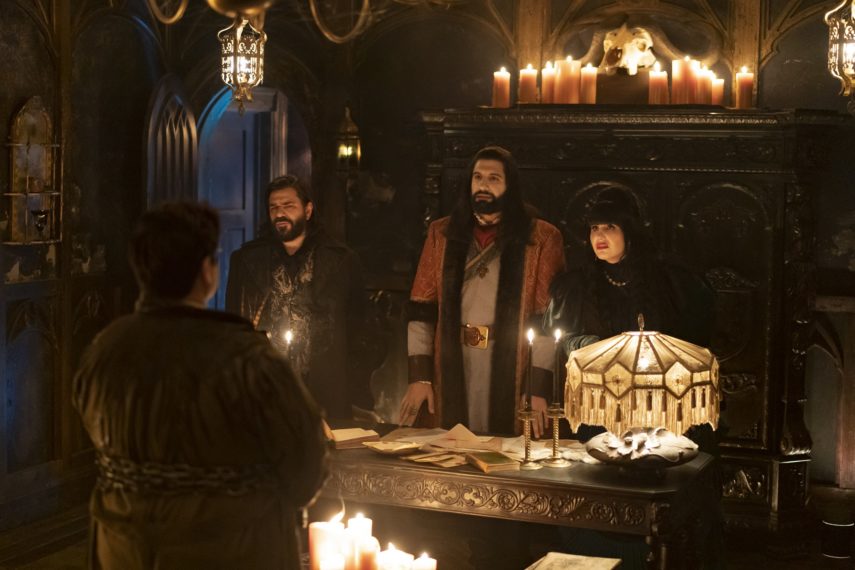 Still, you’d think being undead for centuries would give them a gift for adapting with the ever-changing times. Thankfully, no. They’re so old school that even operating a VCR (remember those?) or modernizing a Vampiric Council website (best viewed with Netscape Navigator!) is beyond their abilities. And forget riding one of those new-fangled escalators.

These ancient souls — lovelorn warrior Nandor (Kayvan Novak), vulgarian Laszlo (Matt Berry), self-centered Nadja (Natasia Demetriou), and deadly dull “energy vampire” Colin Robinson (Mark Proksch) — would be lost without their loyal “familiar,” Guillermo (sly Harvey Guillén), who yearns to be immortal, forever saving their necks while wishing they’d bite his own. Although now that his masters are aware that their human slave is a descendant of infamous vampire slayers, the season opener plays wacky variations on “How do you solve a problem like Guillermo?” — not easy when he’s the smartest soul in the room, even when caged.

While still very much the vampire nest that couldn’t bite straight, once promoted they gain access to powerful ancient artifacts — a shroud of urine? — and lord their authority over a rogue cell of smug young vamps in Queens. They may not be worthy of dry-cleaning Count Dracula’s cape, but these mirthful monsters’ misadventures could make you die laughing. (Happily, the series has already been picked up for a fourth season.)

On a group road trip to Atlantic City, it’s no surprise to discover that Nadja’s favorite Rat Pack tune is “Ain’t That a Kick in the Head.” Shadows, after all, is like a blast to the funny bone, a direct assault on our jugular of joy.

What We Do in the Shadows, Season 3 Premiere, Thursday, September 2, 10/9c,FX