Ask Matt: The Pros and Cons of ‘Ted Lasso’ 'Ted Lasso': Prepare for the Struggles & Triumphs of AFC Richmond in Season 2

Why Can’t We Binge the New Season of Ted Lasso?

Question: I am so excited that Ted Lasso is back after having devoured it last summer, which was just what we needed during the long year of the pandemic. I see that Apple TV+ will be dropping the episodes weekly, not even starting with two or three like they did a year ago. Is this wise, do you think? We’re now so conditioned to binge-watching shows that making us wait a full week between half-hour episodes could diminish some of the enthusiasm. Or will it just build anticipation? — Trina

Matt Roush: It’s an interesting topic and I see it both ways. Some shows, especially limited series, benefit from the binge model, but many do not — and I’ve long felt, even in the early days of Netflix originals, that the flaws of even top-notch episodic series tend to be magnified by repetition when we watch a show episode after episode without a pause. Netflix sees this as giving viewers the instant gratification they want, but I believe there’s at least as much value in luring the viewer back week after week for more of a shared experience. (Selfishly, it also gives reviewers like me a chance to make a bigger deal out of standout episodes, which in the binge model tend to get buried in the crush.) So with Ted Lasso, I’m OK with the episodes airing weekly, the better to savor and look forward to each one. Apple now has enough ongoing series that each Friday it’s almost like an old-fashioned network lineup, with new episodes of Schmigadoon!, Central Park, Physical, and a few others to choose from, with more to come. 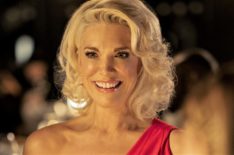 That said, I would argue that a limited-run and very specific series like Schmigadoon! would have been much better off with all six episodes dropping at once instead of playing out the final four on a weekly basis. It’s such a hoot and so fast-moving that it almost doesn’t feel like a laborious binge to sit through all six episodes in a day (which I did when reviewing it). Given the dominance of streaming in today’s TV, I imagine this debate of “to binge or not to binge” will continue.

Question: I just finished watching Season 1 of Ted Lasso and I am a little confused. Critics hype his show as one of the best on TV today. What exactly am I missing? Let me start by saying it’s a good show so I’m not anti-Ted Lasso. But it’s just that: good but far from great or revolutionary, as some critics have suggested. The insane Emmy nominations is greedy; did we need to nominate literally the whole cast? Hannah Waddingham is remarkable, I’ll give everyone that. But so many shows missed out because people are just so enchanted yet again by the British. Jason Sudekis reminds me too much of Ed Helms. There are so many more deserving comedies out there. Just too much already of Ted Lasso.” — Jonah C Matt Roush: Ah, the dreaded backlash. Even Ted might agree the Emmys went a bit overboard this year, as maybe they did last year with the Schitt’s Creek sweep. But there’s a similarity in how the industry embraced these shows that came out of nowhere to delight us with a surplus of humor and good feeling, a heart bigger than a soccer stadium and with an unabashed civility (despite some salty language) that is not the prevailing trend in TV comedy these cynical days. It’s worth keeping in mind that unlike how you may have watched the show late in the game to see what all the fuss was about, the early Ted Lasso fan club didn’t see this coming, and when it arrived toward the end of the first summer of COVID, it was such a breath of fresh air that its success seems something to celebrate, not pick away at.

Will the Networks Keep Supporting the Emmys?

Question: For the last several years, the Emmy nominations have skewed very heavily in favor of cable, especially HBO. Now, it’s the streaming services dominating in most categories, with Netflix leading the pack. The Big Four broadcast networks take turns showing the Emmy telecast. It would seem to be self-defeating for ABC, CBS, NBC, and Fox to continue airing an awards show that continues to heap praise and create buzz for the streaming services and drive more people away from broadcast TV. With declining ratings for awards shows in general, what do you think are the long-term prospects for the Emmy Awards on TV? — Rafael Matt Roush: Keep in mind that most if not all of these broadcasters now have streaming partners — Hulu, Paramount+, Peacock — that their corporate overlords see as the future for keeping all of them in business, and these platforms also help expand the reach of the networks’ series as more and more viewers cut the cord and rely on streaming apps. So even if the broadcast networks are sorely underrepresented in the nominations, they still have some stake in the Emmys, and while the ratings have slipped significantly in recent years, it still falls under the category of “event TV” that the networks rely on through the year. The current rotating contract among the Big Four continues through 2026, at which time there might be some soul-searching among these Emmy outcasts as to the value of the ceremony to their bottom line. But I’d be surprised if they let the Emmys go, even though it seems counterintuitive when they’re barely even invited to the party anymore.

Why Even Make the Emmys Competitive?

Comment: Every year I wait for the stream of letters complaining about the Emmy nominations: broadcast vs. cable, cable vs. streaming, and all the other various permutations. As far as I’m concerned, the Emmys were a joke when Netflix was still a gleam in Reed Hastings’ eye, and they have just gotten sillier. Since no one watches anymore anyway, the Emmys should eliminate all the competitive categories and just honor those shows/people that were outstanding the past year, sort of like a popular version of the Peabodys, and stop worrying about the endless categories. — Rick C Matt Roush: There’s no perfect way to do the Emmys, that’s a given, and while I like the idea of a ceremony based entirely on merit and not on competition, questions would arise as to who would fairly administer it and where and how to draw the line, given how much good work is being done. (It reminds me of the futility anymore of trying to distill a year of TV into a top-10 list, and yet we follow tradition.) Complaints about the Emmys in the summer are as inevitable as the handwringing over cancellations in the spring, but I take some comfort in knowing that people still seem to care enough to gripe about it all.

Bold Comedies from Down Under

Question: I’m really getting into Showtime’s The End. I wondered whether you noted any similarities between it and Please Like Me? There’s something joyous and happy about it even when dealing with death, just as Please Like Me was when dealing with mental illness. And it has the same kind of upbeat theme music. Besides both being from Australia, I wonder whether they have any other connections? — D.P.

Matt Roush: Besides the country of origin and the fact that both series tackle tough subjects with a degree of humor, there’s no creative overlap that I can find. The End seems a much darker and more cynical show, while Please Like Me was so tailored to Josh Thomas’s sensibilities (which he brought to the U.S. in his Freeform comedy Everything’s Gonna Be Okay) that I would never have connected the two. The End, which I describe as “the Weeds of euthanasia,” picks up as it goes along, but “please like me” are words you’ll probably never hear these characters say. I’ll give the show credit for not trying to endear itself to us.

In Defense of Kevin

Comment: I think maybe you’re missing the point of AMC’s Kevin Can F**k Himself. Did you notice how the sitcom scenes (which are purposely stupid) are always colorful and brightly lit, and when the “real world” is shown it is darker and subdued? Annie Murphy is fantastic as Allison (with her friend Patty, played by Mary Hollis Inboden, a close second), a woman trapped with this buffoon of a husband she can’t stand and instead of just divorcing him, decides she has to have him killed. The absurdity of the premise and what she and Patty go through (so far only on the sixth episode) is what makes this a great show! — Nancy R Matt Roush: What point could I possibly have missed? In my review, and whenever I’ve written about the show since, I note the contrast between the fake overlit sitcom world and the drab underlit real-world Allison inhabits when Kevin leaves the room. It’s very obvious — and that’s part of the problem. As I’ve said before, once you get the gimmick, there’s not a whole lot else to get. I agree that Annie Murphy is terrific as Allison, but I don’t find the sitcom parody entertaining at all — it’s a bad sendup of the worst kind of sitcom, a very easy target — and I find the exploits of Annie and Patty mostly uninspired and dragged out. We can agree to disagree on how well the show is executed, but my take on Kevin is that it’s a very clever idea that doesn’t translate to a successful series. But as always, we’re all entitled to our opinions, and I hope you enjoy the remaining episodes. (Kevin concludes Sunday on AMC+, with the finale airing a week later on AMC.)