Soaps are never more filled with hardbodies than they are in the summer months. With this in mind, General Hospital has produced a brand-new set that will debut on Thursday, July 15.

“GH is very excited to announce the opening of The Metro Court Pool and Spa — the place to see and be seen this summer for all the heat and drama,” says Frank Valentini, the show’s executive producer.

The daytime drama’s production designers, Jennifer Elliott and Andrew Evashchen, say that getting the new set up and running took about three months from conception to finished project. Contract players and background artists alike won’t have to work hard to make the pool look like the real thing given the efforts that went into making it appear authentic.

“It’s about three feet deep,” Evashchen tells TV Insider. “Frank [Valentini] wanted people to be able to get into it so we made it deeper than what we’d usually do. “

“Frank’s number one point to us was to make this set look believable,” adds Elliott. “That gave us a great jumping-off point.”

Evashchen says there’s “a real process” for creating a realistic pool set on a soundstage. “We lined [the water tanks] with a certain material that’s like a bed liner for trucks. It works really well for pools. It’s durable and watertight. We chose a specific blue that Frank really liked and had the pool sprayed and sealed in that color.” 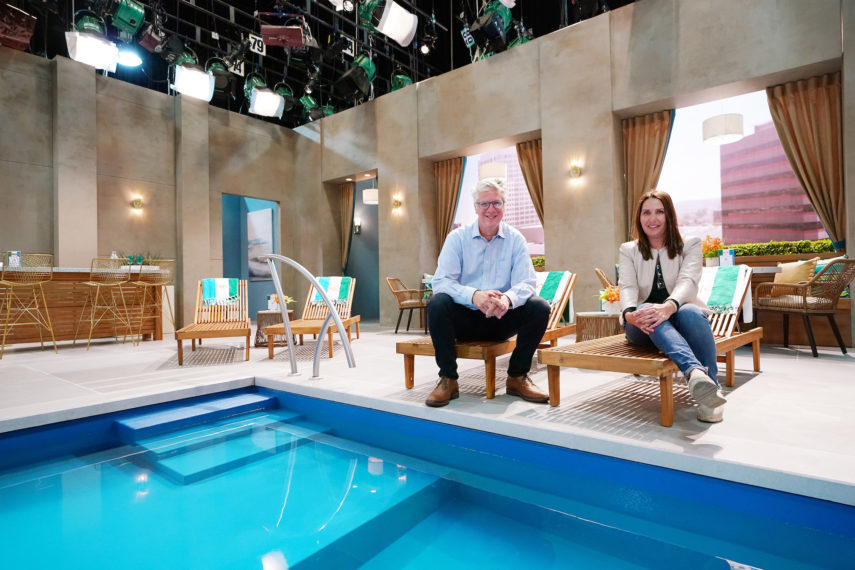 Most sets on soaps have secret alcoves or corners so that characters can eavesdrop when it’s time to reveal or learn information and this new hotspot is no exception. “If I had a dollar for each time that we read someone ‘listening from a place of concealment,’ we could be retired,” chuckles Evashchen. “We always work that into sets.”

The entire set is about 16 feet high. Deck chairs with adjustable backs help complete the look. “We’re trying to make everyone a little bit more comfortable,” Elliott says. “Frank asked if I would put pads on the lounge chairs. The wood looks really good but it’s a little bit hard if you’re sitting there for a long time … That’s who Frank is in a nutshell. He’s firing on all points, keenly aware of every detail at all times.”

“It’s so much fun to work in this set,” Eden McCoy, who plays GH‘s Josslyn) says. “I haven’t gone fully into the pool yet, but they keep it warm for us. It feels different taping in this set, very relaxed. Shawn Reeves [GH’s costumer] has been styling us with these cute [bathing] suits and new wardrobe. Josslyn and her pal Cameron (William Lipton) will have plenty more to talk about this summer now that they’ve cleared the air about their feelings and even recently shared a kiss. “It’s not shocking that this is happening,” McCoy says of the Joss-Cameron pairing. “Our characters admitted to having feelings for one another years ago — before Oscar [Garren Stitt] was dying.”

There was a pause put on that relationship but McCoy says she’s glad that it’s now being fully explored. “William is awesome,” she raves. “He’s one of my closest friends off-screen and we want to give the fans everything that they’ve been asking for.”

Josslyn’s also processing that her “widowed” mom Carly (Laura Wright) is engaged to her BFF Jason (Steve Burton), but that’s been a quick adjustment. “Joss has had the outlook that Carly was always going to have to move on,” McCoy says. “She knows that Jason’s the best one for her.” Next Up for Chase & Willow on 'GH'? Josh Swickard Weighs In

While the drama that takes place at the pool is just beginning, Elliott and Evashchen say that seeing the finished set for the first time gives them a sense of completion. “Once the directors point the cameras at the set and we see the talent lying on the chairs that’s when we take a breath and feel really good about the project,” Elliott says.

Expect to see this new set for a while, as Elliott reveals that they’ve already started filming September episodes and the pool is still being used. “Frank’s intention was to put this up and really get some use out of it. It’s nice to have it on stage and not have it go up and down. We’re going to get a lot of use out of it,” she shares.