Roush Review: Follow ‘Us’ on a Bittersweet European Vacation

Watching Us, a gorgeously bittersweet two-part Masterpiece drama, I felt a bit like travel expert Rick Steves, blurting “I’ve been there” and making a mental note to revisit my scrapbooks every time the characters hit a new European location. A warning: This may make you immediately want to book a trip to Paris, Amsterdam, Venice, and Barcelona—and its nearby beach resort of Sitges. I know it made me want to go back there.

And if you do, let’s hope you’re in more peaceable company than Douglas and Connie, the long-married couple who may be seeing these sights for the last time together. A lot of emotional and geographical ground is covered in four hours (over two Sundays) in Us, adapted by David Nicholls from his acclaimed novel. The network will return for more drama and romance at the titular coastal resort.

Tom Hollander (The Night Manager) is both endearing and exasperating as Douglas, an uptight scientist who hopes a long-planned grand tour of Europe will heal his marriage to the artistic Connie (Saskia Reeves), despite her seemingly out-of-nowhere declaration that she intends to move on. “I just don’t think I can spend my whole life with you,” she announces. “I need to find something else.” In despair and denial, Douglas insists they try to find it together.

The trip was always intended to be a pre-graduation gift for their sullen 17-year-old son, Albie (Tom Taylor) who’s even less of a Douglas fan. A student of photography, which Douglas naturally finds an impractical vocation, Albie keeps trying to go his own way: busking on the streets, bonding with bohemian street musician Kat (a delightful Thaddea Graham). When the family is together, Douglas can’t help feeling like a third wheel, even though he’s made a list of behaviors he pledges to change: “Avoid conflict with Albie. Try new things. Be open-minded.”

Douglas soon realizes that bridging the emotional chasm between him and his son may be even more daunting than reviving his stagnant marriage. As the journey continues, flashbacks of happier times add poignant texture, with Iain De Caestecker (Marvel’s Agents of S.H.I.E.L.D.) and Gina Bramhill well cast as the young Douglas and Connie, a classic opposites-attract union until tragedy and time take their toll.

Can this marriage, and family, be saved? Even if it’s a lost cause, the scenery is amazing. 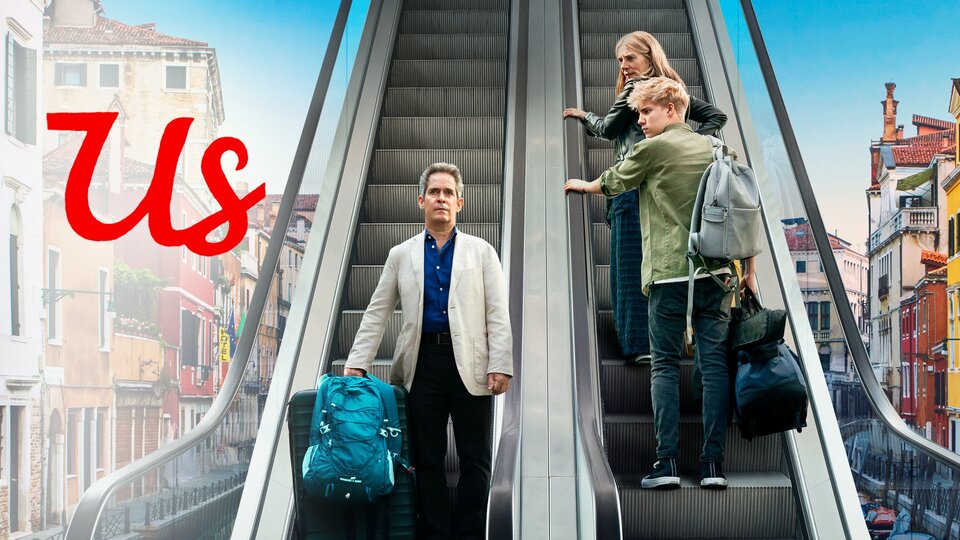 Us where to stream