CBS has plotted FBI Tuesdays for fall 2021, and it has scheduled the newest offering, International, right in the middle of the original and the Most Wanted spinoff.

The latest series from Emmy Award-winning executive producer Dick Wolf follows the elite operatives of the Federal Bureau of Investigation’s International Fly Team. While their headquarters is located in Prague, they travel around the world — to places where they’re invited — to track and neutralize threats against American citizens wherever they may be. Because they’re not allowed to carry guns, they must rely on intelligence, quick thinking, and pure brawn when they put their lives on the line to protect the U.S. and its people. 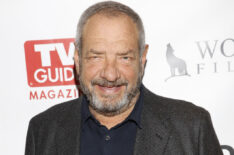 The prolific producer is once again making a TV show with no relation to 'Law & Order,' 'FBI,' or the One Chicago franchise.

While the three FBI shows are different, Wolf notes that they all “have an overarching similarity of purpose.” Watch the video below for more from Wolf and clips from the first two series as we gear up for International. As the creator knows, “you give them what they like, they’ll stick around.”

The full night of FBIs on Tuesdays will launch with a three-hour crossover premiere event in the fall. (It’ll be FBI‘s fourth season and FBI: Most Wanted‘s third.)