Starting Monday, April 5, things are getting hot for Duck Dynasty breakout stars Korie and Willie Robertson. That’s when their new series, At Home With the Robertsons, which promises honest conversations about cultural issues dividing America, premieres on Facebook Watch.

Expect their signature candid humor, and great guest stars — including Bachelorette Hannah Brown, ex-NFL player Tim Tebow, Love & Hip Hop‘s Yandy Smith-Harris, and family members such as Uncle Si and daughter Sadie — who will visit their Louisiana home to discuss such topics as race, religion, and much more. And don’t worry, outdoor adventures are part of the package, as conversations also take place during duck calling, mud-digging and more! 'Sister Wives' Stars Kody and Meri's Troubled Relationship: A Timeline, From the Highs to the Lows

Fans have watched Kody Brown and first wife Meri drift apart for years. Have things come to a head?

TV Insider spoke with Korie and Willie prior to the show’s premiere about cancel culture, baring it all, and much more. (Plus, be sure to watch the trailer, above!)

What inspired the idea for At Home With the Robertsons?

Korie Robertson: The world looks so divided. You can easily unfollow someone on social media or make a comment on somebody’s post, but a lot of the time we don’t just sit down and talk. For our family, sitting around the dinner table and having those conversations is a big part of our lives, so we thought, “Hey, why don’t we just do that with other people and laugh a lot along the way?” We might be talking about something hard, but in the meantime we’re going mud-digging or crawfishing or skeet shooting, doing a little Louisiana in there as well.

Willie Robertson: We love to give a little of that Southern charm. How did you go about choosing your guests and topics?

Willie: That was tough because of COVID. We had a lot of people who wanted to be part of the show, but because of the travel restrictions, it was difficult.

Korie: And we’re in a world where if you say the wrong thing, you can get “cancelled.” So I think all of our guests were really brave to just say yes to coming to do something like this. We’re discussing some tough things so I thought that was really cool. Hopefully we get to do more of these and see how that evolves.

Plus there’s the fun stuff, like Willie entering a beauty competition.

Willie: Part of it was just to take some of the heaviness off of it. When you end up doing something fun together, you kind of end up forgetting the differences we have. It was fun seeing people out of their element. We took some former NFL guys out crawfishing and it’s fun to see people learn new things about Louisiana culture that are important to us. When you think of a talk show, you think of two people sitting across from each other in chairs. This is a talk show, but a whole different way of doing it.

Korie: It’s kind of a moving talk show! For one episode we also talk about our daughter who is 18, getting married. She has gotten a little flack for that on social media, and we talk about that before playing a little Newlywed Game to see how well all the marriages in our family know each other. Everything really that we did, we had a good time doing.

Willie: Korie and I struggled with that game! We’ve been married for almost 30 years so it’s kind of hard to remember first times doing things together. We had a former professional wrestler come out and teach us some moves, and professional video gamers as well. I sure don’t understand it.

Looking ahead, who are some of your dream guests?

Willie: I would love to have Luke Bryan on. He’s such a big star on American Idol. I’d like to expose him to the outdoors.

Korie: We’ve been friends with Luke for a while. He wasn’t able to film this show right now, but hopefully he’ll come join us in Louisiana next season.

Willie: Maybe we can get Lionel Richie.

Willie: We don’t even need Luke if we get them. Korie: I love Dax Shepard and Kristen Bell too. I think they’d be fun. They’re raising kids and trying to do a lot of good in the world. Come on down to Louisiana, Dax and Kristen!

So, I definitely want to know how being on Duck Dynasty prepared you for At Home With the Robertsons.

Korie: We were used to having cameras in our faces and at our homes and everything. But At Home feels more vulnerable.

Willie: Duck Dynasty was more goofing off. I think we need At Home, this is a show that’s made in America. 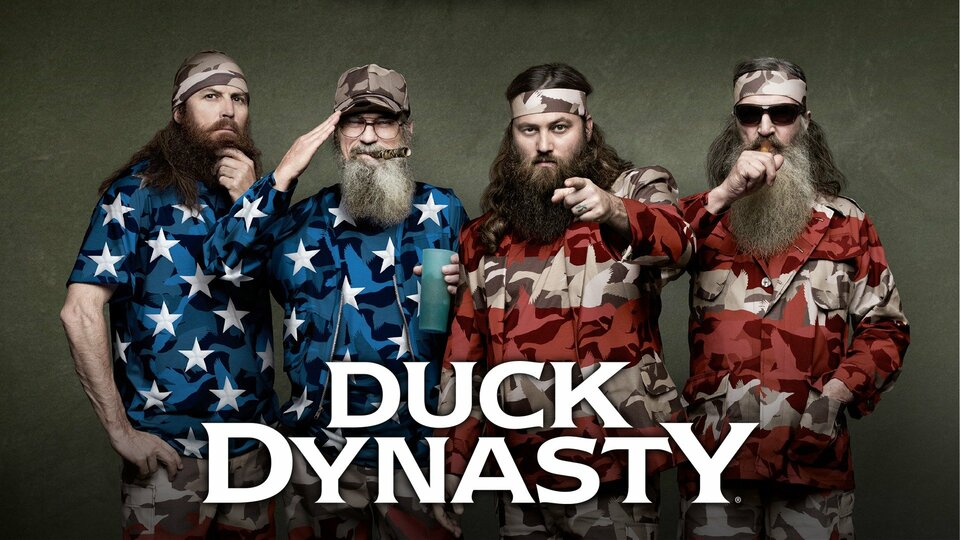 Duck Dynasty where to stream

At Home With the Robertsons