“There’s a really interesting confrontation … that takes us back to the beginning of the curse,” Melanie Scrofano, star of Wynonna Earp, recently shared with the press. If she’s referring to what’s in the promo, below, for the April 2 episode, “interesting” could be an understatement. In it, Wynonna and gunslinger Doc Holliday (Tim Rozon) face off.

“It was really intense to shoot,” she continued. “It was very difficult to shoot. We were chasing the sun. For Wynonna, the most important people to her are involved.” 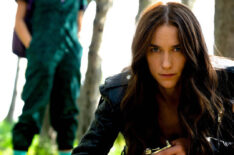 But it’s not like Wynonna and Doc’s relationship isn’t already complicated, however it goes down. Their latest disagreement comes after she goes against his code and shoots a man in the back.

Because of their history, both Scrofano and Rozon admit, they “always” thought their characters might not find their way back to each other. (And with only two episodes left of the series, the clock is ticking for them to do so now.)

“I feel like they’re perfect for each other in the sense that they’re very similar, which is what makes it so hard for them to be together,” Scrofano said. “That was the thing when Dolls [Shamier Anderson] was around. It was like he balanced it out. Dolls was so different from Wynonna, and so she had the best of both worlds because she had someone who was completely different than her and made her see the world in a way she never saw it. And then, on the other hand, she had Doc, who saw the world the way she saw it and understood her.”

And that’s what ends up being a problem for the exes. “One of them’s going to have to change, but then if they do, it doesn’t work either,” she continued.

Rozon agreed, especially since his character’s ready to let go of the past, and Wynonna’s burdened with wielding her gun, Peacemaker, to kill demons. “We can all help, but at the end of the day, the responsibility always came on her,” he said. “Not to quote Spider-Man, but with great power comes great responsibility. I don’t think it’s as easy for Wynonna to just say, ‘I’m ready to move on.’ But they’re always on the same road.”