‘Shameless’: The Gallaghers Make Some Serious Decisions as the Finale Approaches (RECAP)

[Warning: The below contains MAJOR spoilers for Season 11, Episode 10 of Shameless, “DNR.”]

As Shameless quickly approaches its swan song, the pieces are beginning to fall into place for the Gallaghers’ next chapters in “DNR.”

As Lip’s (Jeremy Allen White) desire to ditch the family’s South Side digs continues, Debbie (Emma Kenney) and Ian (Cameron Monaghan) begin searching for their next abodes. Meanwhile, Liam (Christian Isaiah) is left to deal with forgetful father Frank (William H. Macy), and Kev (Steve Howey) and V (Shanola Hampton) begin to see the benefits of life in Louisville, Kentucky. Below, we breaking down the third-to-last Shameless episode. 'Shameless': Are Pieces Falling Into Place, at Last, for the Gallaghers? (RECAP)

Following Frank’s confounding robbery of Edward Hopper’s “Nighthawks” from the art institute, the family is in disarray trying to figure out how he did it, and what they’re going to do with it.

In the meantime, youngest son Liam takes it upon himself to babysit Frank as his dementia clearly worsens. But hanging with Frank of course has its downsides. First, when Liam tries to bribe a fellow classmate in hopes of taking their spot at the local STEM school, Frank butts in with a racist anti-Asian comment. And when Frank makes Liam get into a delivery truck with him that he believes once belonged to Kev, Liam realizes just how far gone Frank is. In a heartfelt moment on the stoop of their house, Frank makes it clear that it’s not Liam’s job to take care of him, and then, in a pivotal moment, Liam accompanies Frank to the tattoo parlor where he gets “Do not resuscitate” written across his chest, a clear message to anyone that might find him in medical distress. As for Lip, he has a lot on his plate. He continues to work on readying the house that he and Tami (Kate Miner) were sharing for the next tenants, looking for a new job, and fixing up the Gallagher home. Tami also pushes him to follow-up on possible job leads. Sadly, there’s no little luck in that department. Worse, when he does get a bite, he has to put the potential employer on hold so he can let an inspector in the house to check the furnace.

And then things get worse: Lip discovers the gas pipes at the Gallagher’s house will have to be replaced in order to turn the gas back on. So, in need of money, when he stops by his and Tami’s place and the next occupants show up early and comment on how much they like the bike in the garage, Lip negotiates a price and sells it to them. That it’s far less than he had hoped for ticks him off, but he doesn’t feel he has a choice.

His ensuing bad mood causes tensions to run high later on when Mickey (Noel Fisher) and Lip get into a fight. Ian does his best to level with Lip and asks what’s going on. Lip complains about the price of the bike; Frank’s stolen painting which Franny (Paris Rose Newton) defiles with stickers!; and how Kate and baby Fred are currently living with her dad. By the episode’s end, the painting ends up on the Chicago train lines for a random bystander to discover, so that’s at least one thing off of Lip’s plate. Meanwhile, Kev and V are helping her mom Carol (Vanessa Bell Calloway) settle into her new Louisville home. When Kevin goes out to run errands — and to try to visit the Louisville Slugger factory — he gets sidetracked by the allure of a cheap burger at a bar. Chowing down, he notices that the manager needs help behind the counter and Kev offers his services in exchange for tips. He does so well, he makes more than he does at the Alibi. V, in the meantime — whose mom, cousin, and aunt all try to convince her move down south — gets a job offer working for a local congressman. Once V and Kev chat about it, it seems as though the pair are planning on relocating from Chicago to Kentucky, but will they follow through with it? 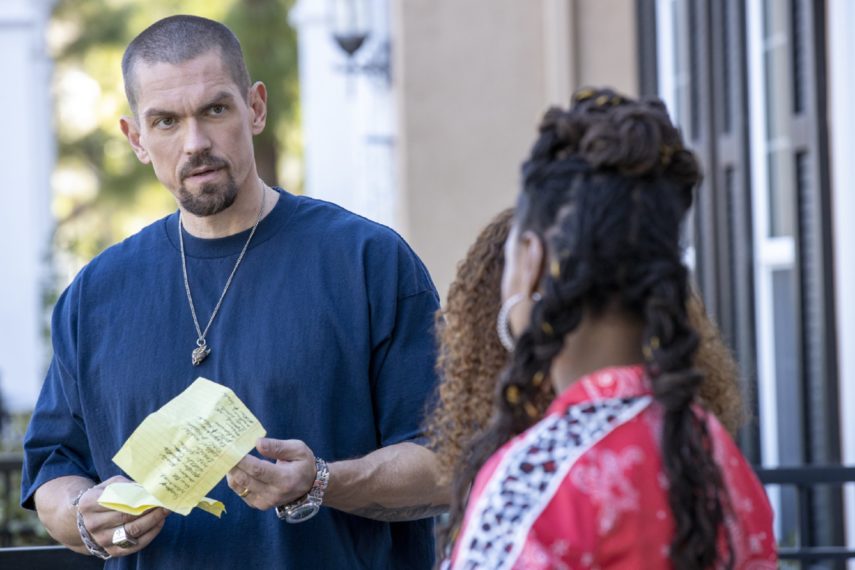 Debbie’s All By Herself

Debbie spends most of the episode house hunting for herself and Franny, but she’s clearly scared about it. She checks out a room in a big house hoping to replace the chaos of the Gallagher’s, but learns the space is separate from everyone else’s, and has a meltdown. Things get worse for her (a common refrain for the Gallaghers, we know) when she takes Franny to the park and meets a homeless woman who is living with her son on the streets after her family kicked her out of the house. Fearful this could be her future, Debbie asks Ian if he’d consider living together, but that’s a no. By the end of the episode, Debbie still has no place to live once the Gallagher house is sold, and we are rooting for her.

Ian & Mickey Explore the West Side

Ian and Mickey cover for Kev and V at the Alibi during their absence, but when a showing for a nice new apartment pops up, they have to leave the barflies in charge. Mickey doesn’t like the apartment because it’s on the West Side, but is enticed by the building having a pool. Mickey’s mood turns fast, though, when Ian reveals he signed a lease when offered the first month free. Will Mickey be OK with this, or does it signal some real bumps in the road for this pair? Carl (Ethan Cutkosky) is back on the beat with Officer Tipping (Joshua Malina), and while they continue to deal with housing disputes, he’s keeping an ear out for talk of the Hopper painting so he can report back to his family. Meanwhile, his eviction assignment begins to upset him when he sees poor people being treated so badly. When a landlord arrives in his fancy car, double-parking across the street from the ongoing disputes, Carl cuffs the man and says that he can’t treat others badly just because they don’t have power. Of course, this is not how things work given that the wealthy landlord is connected. When the man is uncuffed, it’s clear Carl will have a big choice to make between continuing on the force or seeking justice for the South Side in a different way. We can only imagine what he’ll come up with.