[Warning: The below contains MAJOR spoilers for Clarice Episode 3, “Are You Alright?”]

The FBI’s Violent Criminal Apprehension Program (ViCAP) has a big problem in the latest episode of Clarice: A murderer about to share important information is fatally poisoned while in custody.

Karl Wellig (Kris Holden-Ried), who murdered three women about to blow the whistle on a clinical trial, is telling Clarice Starling (Rebecca Breeds) about who had hired him when he suddenly dies. It seems that someone posing as a cop poisoned his drink.

And agent and sniper Tomas Esquivel, played by Lucca de Oliveira, is wracked with guilt: He was the one who brought the drink into the interrogation room. We chat with de Oliveira about the guilt his characters carries, what he learns from Clarice, and what’s next for him on the show.

How’s the team dealing with this conspiracy?

Lucca de Oliveira: We’re in a very compromising position, trying to not make too much noise, and continuing the investigation quietly because we have too many eyes on us. To lose a suspect inside our home base is a huge red flag. 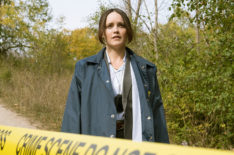 Esquivel thinks it falls on his shoulders because he was the one who had physical contact with [the drink]. He’s a man of few and simple words; he knows when to speak and when not to, when it’s his fault and when it’s not. He feels tremendously guilty and it’s something he has to carry with him through these next couple of episodes. He knows how fortunate he is have the position he has on the team — this is really not something he needs on his “résumé.”

And then there’s Clarice — everyone’s still adjusting to having her on the team.

No one expected to have a woman on the team, but Clarice has a reputation that could be a huge asset, especially with this case. She’s really teaching us new ways of looking at a crime scene, victims, and suspects. Esquivel’s learning a lot from her, [as is] the rest of the team. Some are more skeptical. The team’s trying to come together as best they can when everyone’s waiting for them — [especially] Clarice — to mess up. We learn about Esquivel’s military past when he talks to Wellig. Will we learn more about how his background affects him and his work?

We get a nice hint of who he was in the past, who he is, and what he carries with him day-to-day. The bureau is a foreign place to him and he’s still adjusting to that lifestyle, the character of the suit [versus] the uniform. He knows how to play his role. He’s waiting for chances to continue to prove himself and use the skillset he’s familiar with, and continue to learn skills he’s not so familiar with and do his best for the team.

Clarice says Esquivel only remembers those he’s shot, not those he’s saved. Will that change?

Guilt consumes him. VICAP is a good distraction. He’s not entirely proud of his skillset, but he’s really good at it. It’s why he has his job and reputation. The work we do can be messy, especially the work Esquivel does. When his skills are put to the test, it’s the life of his team over the life of another, and unfortunately, he always has to choose the [former]. The weight of the people he can’t save is much heavier than the weight of the people he does.

How will Esquivel continue to support Clarice?

Esquivel sees Clarice’s value. He’s always looking for the best possible outcome and approach for the greater good, and Clarice is that for us in this case. He knows there’s nothing that can come at the team or him that Clarice can’t help him with, specifically with behavioral science, a lack of evidence, and needing to piece together a puzzle. We’ll see that throughout the season. Esquivel lends his ear to Clarice so she can voice what she’s thinking. He helps her uncover this massive puzzle. We continue to work together and contribute to the case in our own individual ways, which ironically enough are pretty similar. Esquivel’s constantly learning from Clarice. Her skillset can really help his perspective.

What’s coming up with Esquivel away from VICAP?

We’ll find out about his family, what he thinks about his mother and his sisters, which will eventually give all the answers to why he supports Clarice so deeply and tries to befriend and use [FBI Agent] Ardelia [Mapp, played by Devyn Tyler]. He knows her skillset is perfect when combined with Clarice and the team. There’s a good duality with what he does and where his heart lies and what he believes in.