As emergency chief, he had forced the nurse to leave her work on the COVID ward (not cool), but, exec producer Andrew Schneider says, April “is finding new meaning and purpose as a caregiver” now that she’s volunteered for a heart drug trial. 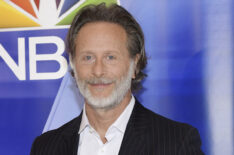 'Chicago Med' Adds Steven Weber as Doctor From Ethan's Past

The latest discord bubbles up when April’s medical-resident brother, Noah (Roland Buck III), returns to the ED. “He faces an ethical and personal dilemma with a patient,” hints exec producer Diane Frolov — and has a major run-in with former mentor Ethan.

April again takes her brother’s side, further alienating her ex. “Anything that happens in the work environment, they feel personally,” Frolov adds. Is this the final rupture for the pair? Maybe not, she says: “There is always hope!”