3 Reasons to Binge ‘The Crew’ With Kevin James on Netflix

Old-school NASCAR crew chief Kevin Gibson (The King of Queens‘ Kevin James) butts heads with his new tech-savvy boss, Catherine (Jillian Mueller) in The Crew, a new workplace comedy set in a race shop. Here’s why our engines are revved for its February 15 premiere. 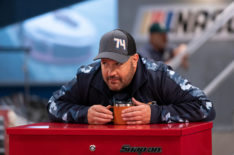 1. We love an underdog

The No. 74 Chevy hasn’t been to Victory Lane in four years, but Gibson’s crew remains loyal to him. Catherine, too, has heart. “She wants the best for this team,” showrunner Jeff Lowell notes, “and a lot of her arguments are right.”

2. The potential for romance

Gibson “is married to his job, so if he’s going to find love, it has to be someone who loves the sport as much as he does,” says Lowell. Could that be his close friend, office manager Beth (Billions‘ Sarah Stiles)? NASCAR pros Cole Custer, Ryan Blaney, and Austin Dillon make appearances and score laughs. “That kind of knocked me down a couple of pegs,” James jokes. “But I’m happy for them.”