Is Philippa Georgiou (Michelle Yeoh) off to her next Star Trek series?

In Discovery‘s December 17 episode, she thinks Carl (Paul Guilfoyle), the “Guardian of Forever,” sends her — through a portal, where she finds herself stepping back into the shoes of her Terran Emperor self — to fix what’s ailing her, but unfortunately, that’s not the case. “You were sent back to be weighed,” he explains to her and Michael (Sonequa Martin-Green). Since she made different choices, she got a “second shot,” in “a time when the Mirror universe and the Prime universe still aligned.”

“That’s so you won’t fall apart, atomically speaking,” he says. “But it won’t be easy. The paper says the forecast will be bumpy and painful, lots of rainstorms, heartaches.” And so she says goodbye to Michael and heads off to the unknown.

Is this setting up the Section 31 series in development? TV Insider spoke with Yeoh to find out. I really enjoyed these two episodes and seeing a different side of Philippa.

Michelle Yeoh: I’m pretending that if I don’t watch [Episode 10], then I’m not going to be leaving my Discovery family. I’m in a little bit of denial at the moment.

Will we see you on Discovery again?

I hope so. Georgiou is such an intriguing and wonderful character on so many different levels, not just as herself but what she brings and instigates through the other characters that it seems like we can’t get rid of her and shouldn’t. … In a very weird way, she’s like a moral compass. It’s like all the things you want to do but you dare not because you feel like you’re a good person, and then she goes out and says it outright and then you go, “I wish I would be brave enough to do something like that.” But thank god you don’t and you have someone like her around you. Georgiou would not be where she is without the people around her, especially her number one, Sonequa, who is so exquisite in the way she plays Michael Burnham and even more scary when she plays Mirror Burnham. She nailed it. When we came to the Mirror universe, everyone had such a good time just letting it all out and having that evil devilish fun with their characters.

Speaking of that, can you talk about filming those scenes with the cast in those versions of the characters? It’s been a while since we’ve seen them.

Yes! When we realized we were going back to the Mirror Universe, you could feel the excitement from the cast. You look at Discovery, the Federation, they are such goody-goody good shoes. They are always doing the right thing and you almost need a character like Georgiou to have some fun around them. Then when they knew they were going to play the Mirror universe — from the hair to the makeup to the posture, look at Sonequa the way she sat, the way she hung back and looked at you with those eyes. I remember saying to her, “I want my Bambi eyes Sonequa, my number one back because this one is so scary,” and we relished in it. As an actor, that’s what you want to be able to do, cross boundaries, play and have fun with characters that you are portraying. The Mirror universe is probably very liberating, to play an evil character, “I don’t answer to anybody, I’m going to do what I want to do and I’m just going to exploit it to the fullest.” … We really had so much fun and I watched the rest of the cast, the way they talked, walked, swaggered, it was amazing.

We had that heartbreaking moment where Philippa asked if Michael could go with her and then Michael saying, “You are my Philippa.”

When I watched that or we had a reading, it was like, “Don’t make me cry. We’re not going to go there.” Even Mother Nature played a great part when we got to the location. It was supposed to be a barren land, and then it starts to snow. The ending was so apropos: We started off in the desert, these golden dunes, and then when it came to the end, it was full circle where it was stark and cold, but at the same time, there was a sense of romanticism. When you say goodbye, we hope it’s never goodbye, and it did come a full circle because with Michael and Philippa, when they started the journey, it was Philippa who was trying to instill humanity into Michael — she started off in the Vulcan ways, where emotions were always kept in check. But then it became Michael trying to instill humanity into Philippa, the Emperor, who only knew how to rule by tyranny and fear. That entire journey was really quite beautiful.

Philippa’s come so far and she gets to see that herself in this return to the Mirror universe. What do you think has surprised Philippa the most about how she’d changed?

The Terran empire disappeared after 500 years ago, there were no more crossings, we were never heard from again, and the only thing you can come away with that is that we destroyed ourselves. I think she realized that when she went back to Michael Burnham and she said, “How many more times are people going to revolt against us? If we don’t give the people some kind of peace and harmony, we are just going to kill ourselves.” She learned that just by killing, that was not the answer or the way to rule moving forward. She learned a lot from Prime Universe and when she went through the portal, that was what Carl was trying to tell her: “This is your chance to prove your worth. Will you be able to do something different, make a difference? If you go back to your same way, then you will die.” That was what Emperor Georgiou learned: She had to be a compassionate leader, to learn to give her people a way of life and not just to take life. That was why she was given a second chance. When she goes through the portal and she says goodbye to Michael, where was she going? Obviously she is going to go somewhere where she can make a difference, and that’s what I love about this episode.

She’s also leaving this Discovery crew she’s grown fond of. Who else will she miss the most?

Saru (Doug Jones), Tilly (Mary Wiseman), Culber (Wilson Cruz), especially Stamets (Anthony Rapp). Throughout her journey with them, she’s always pushed her way into their lives. Season 2, when she saw Stamets and Culber having problems, it was her who instigated, “You two cannot be like this.” There were many things in this journey where the crew, the bridge, every single one of them mattered to her. I loved when she actually said goodbye to Saru, where it was a sign of respect. She was finally acknowledging, “You are the captain,” and to Tilly, “You are a good Number One.” She’s missing all of them already, but she’s just too proud — she still hasn’t lost that Emperor thing yet — to acknowledge that. But I think she will find a way back to them somehow. If there were any sign of danger, she will find her way back to protect them.

It’s sad we won’t see you on Discovery anymore, but I’m assuming this is setting up the Section 31 series we’ve been hearing about?

[Laughs] I really do hope to continue to tell all the adventures of Philippa Georgiou because she is such an amazing character that any actor would kill to have this part. I know the EPs and writers and my team are still working very hard because we have a lot more stories to tell. … I hope it will be very soon. What would you like to explore about Philippa in that series, whenever it happens?

It depends on what timeline when she walks through that door. Obviously she’s not going to stay in the future, but I hope in the short time she was there, being the amazing engineer and smart cookie she is, she would’ve learned a lot about that time period that she would be able to take with her. Can you imagine what she could bring back to the past? Without changing the future, of course. Developments that could make a huge difference, and if it was Section 31, that’s what Section 31 is all about, isn’t it?

I don’t want her ever to lose all the edge that she has because Emperor Georgiou, Philippa Georgiou, especially this Terran Georgiou has a purity of honesty that is important, but at the same time, she has learned compassion and humanity along the way and a realization that you can’t rule by fear itself. It will not work. Maybe in the short term, but not in the long run. And we can see what is happening in our world today, all that rules by tyranny and fear will fall and they will fall badly, so she has learned, she has seen the future and she knows. 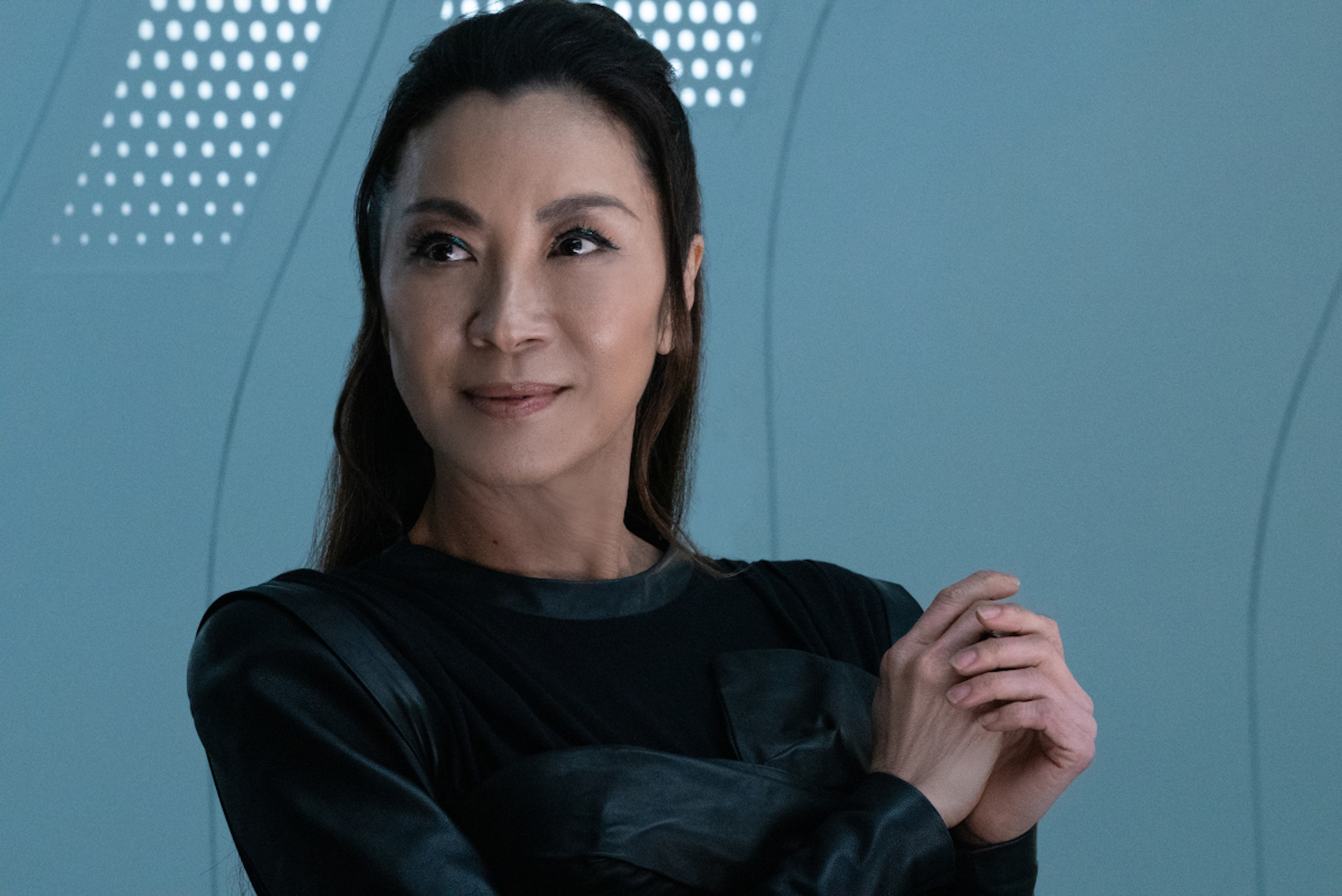 Before leaving, Philippa tells Michael that while “Saru has navigated Discovery admirably, he’s not the only one who’s suited for the Captain’s chair.” What has she seen in Michael and did anything from her experience in the other universe lead her to tell Michael that?

In Michael, she always saw the leader. This time when she sees Michael, she sees Michael who is not afraid to challenge the Federation. The Federation has always lived within such strict boundaries and that is what Saru is doing right now and it’s very interesting to see that difference that’s coming out from Michael Burnham because we have to change and adapt. We don’t have to be the rebel, but we also need to be a voice that is strong, that has convictions, and not just a sheep.