« EPISODE 2
Welcome to the Club
EPISODE 4 »
The Key

On the surface, Althea (Maggie Grace) and Dwight (Austin Amelio) don’t seem to have much in common. But the Colman Domingo-directed “Alaska,” yet another solid installment in Fear’s vastly improved sixth season, asserts that these two could be good friends… and it makes the companionship, built on the foundation that these two have both lost people they loved, believable.

After all, Dwight’s wife, Sherry (Christine Evangelista) is still missing, and Isabelle (Sydney Lemmon), Al’s kind-of-sort-of girlfriend, maybe (Al admits she only knew her for “a couple days”), has flown away in her helicopter. They both understand what it is to care for someone with an uncertain fate. So, when one of them has the chance to reunite with said person, the other says they need to go. Of course, the journey ends up being more perilous than either of them anticipated. 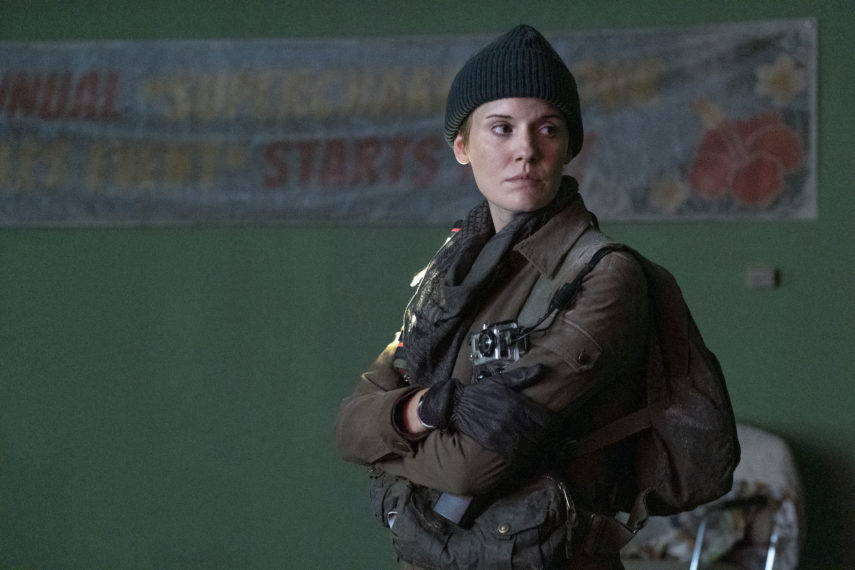 The episode opens with Morgan (Lennie James) building himself another of his iconic aikido sticks — although he’ll still be using that cool axe, too. He swears to his late friend’s wife that he’s going to find Grace (Karen David) and make everyone safe again by bringing them there, but that’s all we see of him this week.

Al and Dwight have been spending their time recording footage of places and getting supplies from them for Pioneer leader Virginia (Colby Minifie), and it seems they’ve also become pretty good pals (throughout the episode, they’re playing a morbid game where they’re trying to collect driver’s licenses from walkers from all 50 states). That said, they don’t tell each other everything — Dwight knows about Isabelle, though not her name, and for his own good, Al hasn’t revealed the specifics about CRM to him.

That makes things complicated when Al hears Isabelle over her radio and realizes they’re close to the next CRM “drop zone.” She and Dwight could make it by nightfall; and Dwight, who says he’s “made his peace” with the fact that he’ll never see Sherry again, is adamant that they should go. They make their way into the city, but, surprise! The drop zone is on the rooftop of a very, very tall building. And years into the apocalypse, there are no working elevators. They climb the stairs and work their way through several floors until they find themselves being held at gunpoint by a pair of survivors. Turns out, these people are part of a larger community that’s been stricken by the bubonic plague. (I’m not faulting the show for this given that this episode was filmed pre-pandemic, but yikes, plague storylines in 2020 are just rough.) And yes, the building is flooded with infected rats.

Al and Dwight convince the group’s leader, Nora (Devyn Tyler) that they’re not a threat, but the duo disagrees on how to handle things from there, given that CRM apparently killed a member of Nora’s group just for being on the roof during a previous landing (yikes). Al wants to keep going and get to Isabelle, while Dwight says they should stick behind and help these people rather than potentially getting shot on sight. Without antibiotics, Al says, there’s nothing they can do… and so they continue on.

“Continuing on” involves a claustrophobic sequence in a tunnel filled with rats and a truly unfortunate destination: a whole floor infested with walkers. Al and Dwight run into a bathroom to escape the dead, and while they’re there, they realize Dwight has the plague (earlier in the episode, he mentioned there had been a rat in his sleeping bag one night, so it’s presumed he wasn’t infected from the others in the building, which would be impossibly fast). Nora saves them from the dead and, as a trio, they keep going and make it to the stairway to the roof. Al encourages Dwight to go back to Virginia and get antibiotics, and she says she can keep going to Isabelle by herself — if all goes well, she’ll be leaving via helicopter. They part ways, and Al steps out onto the roof.

A Happy (and Unexpected) Reunion

Except, Al doesn’t see Isabelle at all. She sends up a flare and uses CRM’s channel to tell her not to land because the building is infested with infected rats. Isabelle thanks her for the advice and tells her there’s beer in the crates, adding, “I hope it’s not your last.” An emotional Al, admits, “It’s good to hear your voice,” and Isabelle, still not realizing who she is speaking with, agrees that it’s good to hear someone. She flies away in her helicopter, and Al finds the brewskis in the crates, along with antibiotics. Everyone’s saved!

And really, everyone is. Al gets back in contact with Dwight, who hasn’t left yet, and tells him about the antibiotics. They distribute the medicine to the sick — Dwight gets his fair share, too — and they offer to find the survivors a better home. That seems to be that, and then, they hear a familiar voice on the radio, saying that they saw the flare and asking if someone in the building needs help. It’s Sherry!

In an alleyway outside, Dwight and Sherry have an emotional, joyful reunion. And for the moment, with everyone cured of the plague and husband and wife together again, at last, all is well.