Aldis Hodge may only be recurring as Hardison in the revival on IMDb TV (Amazon’s free streaming service), but the team won’t be down a hacker as they provide … Leverage.

Aleyse Shannon has been cast in the series regular role of Breanna Casey, Hardison’s sister after she ended up in the foster system following her parents’ tragic car accident. Described as “sarcastic and intelligent,” she’s “a genius mechanical engineer (just ask her about her drones),” and to her, “social hacking and social media manipulation [are] child’s play.”

After Breanna came to live with Nana, Hardison “reached out to the spiky, scared 10-year-old by teaching her computers and hacking.” She’ll be picking up some new skills with the team and “will need to learn to embrace and trust her new family.”

We can’t mask our excitement about making #Leverage2

In addition to Hodge, Gina Bellman (as grifter Sophie Devereaux), Beth Riesgraf (as thief Parker), and Christian Kane (as hitter Eliot Spencer) are back for the Leverage revival (as series regulars). They “have watched the world change over the last eight years,” the logline reads. “It’s become easier — and sometimes legal — for the rich to become richer and the powerful to squash anyone who gets in their way.”

Timothy Hutton’s mastermind Nathan Ford is not returning, but that’s where new cast member Noah Wyle comes in as “Harry Sullivan, a corporate lawyer who is looking for redemption after realizing he’d been sitting on the wrong side of the table for his entire career.” 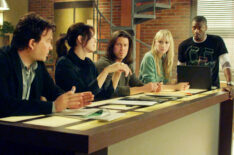 'Leverage' Revival: What We Know So Far About the TNT Drama's Return

They’ll go after “a new kind of villain, from the man who created an opioid crisis from the comfort of his boardroom, to the woman who prefers to deport workers instead of paying them, to the shadowy security firm that helps hide dangerous secrets for a price.”