‘Little Voice’: Brittany O’Grady Hints at ‘Light at the End of the Tunnel’ for Bess

Apple TV+’s Little Voice is nearing its season finale and the drama is at an all-time high for Bess King (Brittany O’Grady), a young woman trying to make a name for herself in New York City.

The sweet tale has taken some somber turns in recent episodes leading us to wonder where her story is heading. In the most recent installment, “Sea Change,” Bess deals with the reality of her missing father and the toll the situation has taken her autistic brother Louie (Kevin Valdez). Bathina weighs in on playing an LGBTQ woman from a conservative Indian American family, working with Sara Bareilles, and what's to come.

Throw in continued professional rejection, her conflicted feelings for two different men, and the arrival of her long-absent mother, and it’s clear Bess is dealing with a lot.

TV Insider caught up with Brittany O’Grady to discuss Little Voice‘s penultimate episode and what’s to come in the upcoming finale. Below, O’Grady gives her take on Bess’s parental situation, the Ethan-Samuel debate, and whether or not she can escape the obstacles in her way. Bess is under a lot of pressure at the moment between her father’s absence, her complicated romantic ties, and an uncertain music career. Is there a light at the end of the tunnel?

Speaking of family, Bess’ father is missing but her mother, who has been MIA for years, suddenly resurfaced. How will her presence affect Beth’s life now?

It’s interesting because I think that you find the pieces that make Bess who she is through her mother. When you see her mother and their relationship, you see all the similarities that they have. It’s really funny because I think the parents did the opposite of what they should have done. The mother reappeared, and then the father left. Not that Bess’s mom should have never come, but I think that a lot of the family relationship revolved around the men and Bess is always catering to them. They love Bess dearly and now their [real] mother figure — [a role that Bess has always played] — shows up.

It’s just really interesting creating the scenes with my mom on the show. Katrina Lenk was incredible. I always thought she was a fabulous actress, so when I heard she was playing my mother… I’ve never freaked out over someone playing my mother before in my life. One of the things that we established, especially for Episode 8, was finding the similarities and physicalities and all these different things that maybe Bess observed as a child and got from her mother. The soul and connection that she has with her father is extremely deep and I think you’ll see the contrast of the relationships for sure. It’s clear Bess is torn romantically between filmmaker Ethan (Sean Teale) and musician Samuel (Colton Ryan) and now things have taken a turn between her and Samuel. Can you tease where Bess stands with the two?

You’ll start to see the impact of Samuel’s actions and Ethan’s actions towards Bess, and I think it finally hits her. I think a lot of time, we as people go through relationships or find relationships that reflect what we’re feeling internally to fill that void or fill that gap, are attracted to the love that we may have received as children. I think that will definitely be clear after Episode 8. I think by Episode 9, you’ll see how things unfold and where Bess’ heart turns to after experiencing all the deep trauma that she’s had with her family dynamics.

Will there be more story to tell beyond the finale?

Oh, I think there is way more story to tell beyond the finale. I hope there’s a Season 2. Actors love to tell stories, we love reading the scripts and Jessie [Nelson] is such a phenomenal writer that I genuinely just want more. I think that Jessie did such a beautiful job making these characters so authentic, and it’s like you’re watching a friend go through something. You reflect and look back like, “Wow, look how much you’ve grown. I can’t wait to see your future.” I think there’s definitely more that needs to unfold after the finale. 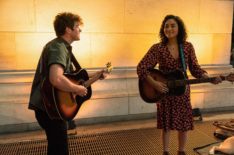 In the show’s earlier episodes, Bess’ father tells her to “let the light in” which is easier said than done. How do you think she’s achieving that for herself?

I think it’s these little internal sparks and connections where she realizes how her music impacts herself and others. It’s not about getting approval from a record label. She found the purpose of her music and why she is a musician. You see the reasons why her father’s music career failed, because of his alcoholism, or maybe his alcoholism is the struggle of his career. I think that by the end she finds a seed of how her music and voice impacts others, and it’s not being a successful singer that has a song called “Dance is my Lung” on 50 different radio stations.

The music for this series was written by executive producer Sara Bareilles. What was it like getting to collaborate with her on this series?

Sara really adapted songs and things to my voice and [provided] guidance to me musically throughout the whole show. She also gave me so much perspective of what it’s like to be a musician when we’d have scenes where she’d be on set and describe things because that’s what her whole world is. I just observed. Watching her in the studio, she’s so sharp, she’s so gifted musically. Her brain is like this crazy machinery, and then her talent comes from something beyond us, genuinely. I really think it’s like a God-given talent, I don’t know how to describe it. To watch someone with such gift, I just tried to be a student and learn off of her and absorb anything that she could give me to just portray this character well and to do her music justice.

You previously featured in Fox’s music-based drama Star. How did that experience help prepare you for Little Voice?

It prepped me immensely. I don’t think I would have been able to do Little Voice if I hadn’t done Star. I’d never sang in a studio before, I never recorded before. The only experience I had before I did Star was singing on a stage in theaters and doing musicals growing up. So for Star, we were recording music for three years. We’d being going straight to set, then the studio, and then going to dance rehearsal, so it was kind of the same for Little Voice. I’d go to the studio, then piano and guitar lessons are basically like the dancing with the choreography. It was more responsibility for Little Voice, but Star was a very hard job, and I think it definitely prepared me and was a boot camp for this role.

You also shot on location in New York City which almost serves as its own character in Little Voice. What was it like getting to film around the Big Apple?

It was a dream. It was truly a dream, because when I was a kid, I would go to New York for auditions on Broadway, and I hated it so much. I didn’t see the charm in New York. I was this 10-year-old kid in overalls and everyone just seemed so mean and nasty. That’s how I felt for years. I always wanted to have my chance to really embrace New York, and I think the transition of how I felt about New York at the beginning as a child to how I feel about it as a woman has just grown exponentially. I love New York. I loved working there. I’m an East Coast gal. As I’ve grown older, I resonate a lot with the city and appreciate the magic and the opportunity that it offers, which I think is reflected so much in the show.

Little Voicehas a great soundtrack. Do you have any favorites among the tracklist?

I think my favorite to perform was “Simple and True.” That was a powerful moment for Bess, so that was something I enjoyed performing. One song that I really enjoyed listening to, because I recorded it after we wrapped filming the show, was “King of the Lost Boys” from Episode 4. That was like a true musical experience I had with Sara just recording it. I’m so excited that I was able to hear Sara sing it first, and it was a song that I felt matched my voice musically. I really appreciated that.