Everything We Know About Clare & Tayshia’s Double ‘Bachelorette’ Season

Get ready for a Bachelorfranchise first in the upcoming season of The Bachelorette.

While it has yet to be officially confirmed by ABC, all signs point to rumors of the lead changing midway through Season 16 being accurate. According to multiple reports, 39-year-old Clare Crawley fell for one of her suitors, Dale Moss, early on in the season causing her to quit. And now, 29-year-old Bachelor Season 23 alum Tayshia Adams will be continuing in Clare’s stead as the new Bachelorette. Clare also allegedly liked (then unliked) a tweet about Tayshia’s casting over the weekend, even though she shouldn’t have had access to her social media account while filming.

A few of Clare Crawley's axed suitors are already speaking out about their elimination.

In fact, even the promo that ABC aired teasing the new season is shrouded in mystery, suggesting there may be some truth to a change. Watch the five-second video below.

Clare’s journey to find love began in The Bachelor Season 18 (with Juan Pablo Galavis), and if the rumors are true, she did just that soon after filming on her Bachelorette season began. And viewers will see that, a source told E! News, adding, “Clare will then conclude her journey and announce that Tayshia is the lead.” (Again, this has yet to be confirmed by ABC or Warner Bros.)

This may explain the report from Us Weekly on July 31 about producers bringing back contestants who had been in the running for Clare’s season but were not chosen. They were allegedly called to the resort in La Quinta, California, where the season is being filmed in quarantine for the cast and crew’s health and safety due to the coronavirus pandemic. Could those contestants have been brought back for Tayshia if she does in fact take over as the Bachelorette? 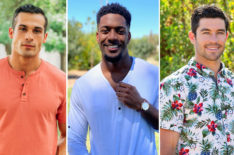 On July 15, ABC announced the 42 potential suitors for Clare. (Before production was halted, the network had shared photos of 32, including the next Bachelor Matt James, in March.)

Bachelor Nation is already reacting to the possibility of Tayshia stepping in. Among the stars sharing posts on social media is former Bachelor Colton Underwood, in whose season she first appeared in the franchise. “Congrats @TayshiaAdams — good luck and I hope you find yourself a better kisser,” he tweeted, calling back to her past Bachelor in Paradise comments about his poor kissing style. See more reactions below.

Congrats @TayshiaAdams — good luck and I hope you find yourself a better kisser 😉 https://t.co/nmzwdtDSCl

If this is true then this will for sure be the most dramatic season EVER !! Guess we’ll all have to tune in to see how this one goes down. I hope both Clare and Tayshia leave happy and in love !! 💗✨🌹 https://t.co/AeT10pGSTr

The world: The Bachelor franchise is ridiculous you can’t find love in a month or 2!
Clare: Hold my beer

However, I think it’s a win/win for the franchise: One season. Two women. One older. One brings diversity (and she’s a fan fav). I’m not mad….(but I’m so intrigued…..!!) Thoughts?! 📸: @thebachelortalk

Rachel Lindsay, who first appeared on The Bachelor in Season 21 (Nick Viall) before becoming the first Black Bachelorette in Season 13, told ET she’s “thrilled” about the casting. “I have been fighting for inclusion, and I’ve said before that Tayshia would be an excellent Bachelorette, so I am more than happy to pass the torch,” she said. “I am so excited to see what she’s going to do, how she will represent herself and her journey to find love.”

John Paul Jones, also from Tayshia’s Bachelor past (Bachelor in Paradise), also wished her well. “I’m really happy and excited for her on this new journey,” he told Us Weekly. “I hope she finds the love and happiness that she deserves.”

The franchise’s host, Chris Harrison, has yet to directly address the rumors, instead tweeting Monday, “Hey guys been gone a while and feel like it’s important I say something on this,” before promoting the night’s episode of The Bachelor: The Greatest Seasons — Ever!revisiting Ali Fedotowsky’s journey.