Since 2001, when Air Jaws first showed us great whites bursting out of the waters off South Africa to capture prey, the franchise has represented the best of Discovery’s Shark Week: thrilling visuals that make for great TV and valuable behavioral research. It’s only right, then, that the next installment of the popular franchise kicks off summer’s longest-running event on August 9.

In Air Jaws: Ultimate Breach Off (8/7c), three research teams—led by shark expert Chris Fallows and marine biologists Alison Towner and Dr. Enrico Gennari—vie to see who can capture the most breaches on film at Seal Rock in Mossel Bay. Friendly competition aside, the trio, who’d been off the water for three months following pandemic restrictions, were really out to gauge how many white sharks are still in the area. Mossel Bay became a hot spot for “Air Jaws” after killer orcas decimated their numbers in 2017 and scared them off their traditional hunting grounds in South Africa. With overfishing of their prey (smaller sharks) and climate change presenting additional threats, researchers worry Mossel Bay may be the last place to see sharks fly along the country’s coastline—which was once home to an estimated 1,000 great whites.

“More than any other Air Jaws we’ve done, this one has a really strong conservation message: We have to do something to protect these great white sharks because they are on the brink of annihilation,” says filmmaker Jeff Kurr. “Does Air Jaws have a chance of making a comeback?”

Of course, to make the population study interesting, Kurr enlisted fearless diver and fan favorite Dickie Chivell to judge a second category of the Ultimate Breach Off: Most Spectacular Breach. Towner opts for a drone to deliver a 360-degree Matrix-style view. Fallows, the face of the franchise, deploys a Tow Cam that records at water level, just feet from a shark rushing a decoy seal at 25 mph.

“I don’t want to give away who won the competition, but Chris got some unbelievable breaches,” Kurr teases. “In fact, one of the breaches is probably the best he’s ever filmed.” And Gennari creates a “Disco Seal”—so named because it’s outlined in lights—for night shoots. “If you’ve seen movies where Godzilla gets into the power lines and there’s sparks, that’s what it looks like. Unbelievable,” Kurr says.

The franchise’s greatest hits get their due in a retrospective premiering later in Shark Week: Air Jaws 2020 (August 13, 8/7c), narrated by Mike Rowe and featuring new commentary by Kurr, Fallows, and more familiar faces. Here, we asked Kurr to look back at some of the most memorable moments. 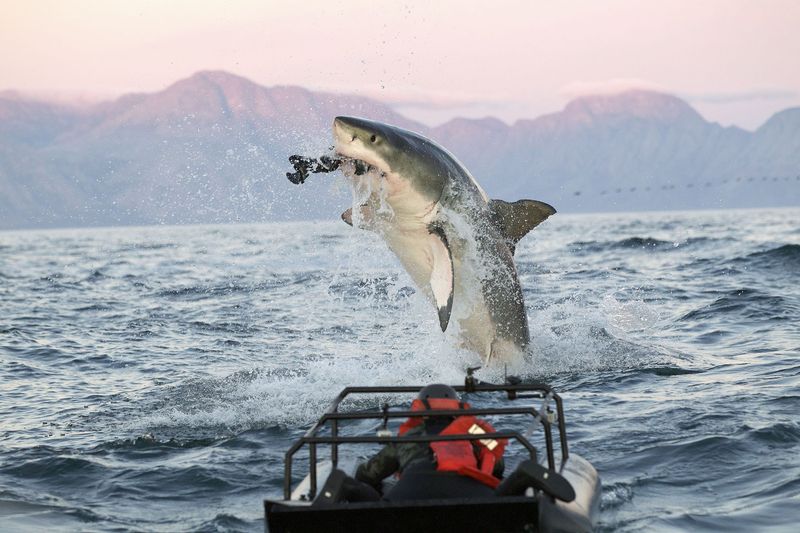 If someone had never seen a great white breach before, which breach would you show them first?

Jeff Kurr: There are really two. One I’m personally involved with, so I definitely have a bias, and that would be the Colossus breach [in 2012’s Air Jaws Apocalypse, above]. The fact that it happened at the 59th minute of the eleventh hour, when we were just about to give up, and Colossus came shooting out of the water like that. It’s just such a spectacular backdrop and such a big shark. I still get goosebumps when I think about sitting on that Seal Sled and watching Colossus from 10 feet away flying above me and splashing me. I think that’s the most iconic breach in Shark Week history.

But, a very close second has to be the HORNET breach with Dickie [in 2015’s Air Jaws: Walking With Great Whites], when he was riding inside the HORNET craft underwater, and this unbelievably massive great white shark came flying up and sort of hung there, like he was going in for a slam dunk. That shot has got to be one of the best shots in Shark Week history. The thing that links those two shots together is the size perspective. You have a person in the foreground, and that really shows you how big these sharks are. It also points out the majesty of these sharks when they fly out of the water in super slow motion. In nature, there’s nothing else even close.

After the HORNET sequence in the special, Dickie says, “I can’t believe it worked. I can’t believe no one died.” Have there been any ideas you’ve shot down over 20 years of Air Jaws?

If I was going to shoot down a Dickie idea, it would have been Parthenope, the cardboard shark cutout [in 2014’s Air Jaws Fin of Fury]. We decided to go for it, and I don’t know what I was thinking. Thank God nothing happened that would have made the sharks look bad or injured Dickie, but that was kind of a hair-raising experiment. We were very nervous the whole time Parthenope was in the water. The saving grace is that Dickie is a fish—that kid is unbelievable in the water. As you see in the show, I didn’t think the idea was for him to ride on Parthenope, but to just put it out there and see if the sharks react to it. And Dickie was like, “Oh, no, I’m actually going to paddle this thing around and give it some movement so the sharks will be attracted to it.” And boy were they ever.

Making this [retrospective], I remembered that Parthenope actually broke loose from the boat. I thought it was too hot for television at the time. [Laughs] We can show it to the viewers for the first time, now that a few years have passed. Chris had to actually go out and rescue him in the rubber inflatable, and that was pretty scary because Dickie had no control of Parthenope—he was in the current and floating far away from the boat, and we managed to capture that footage.

We’re also reminded that you ended up adrift on the Seal Sled and said you’d never get on it again.

When I was adrift, I think everybody was panicking and put their cameras down to try to figure out how we were going to get that Seal Sled back. Because I was heading over towards an area called the “Launch Pad,” where all of the seals are attacked by the white sharks off of Seal Island. I wasn’t sure if they could scoop me up, so I was thinking at the time, Am I going to have to jump off of this and swim to the island? That was really one of the alternatives, rather than getting smashed up in the waves and the rocks. When that Seal Sled is not being towed, it’s very shaky, and I felt like a shark could just bump it and it would knock right over. But it was worth it because, again, that Colossus breach is one of my favorite moments in Shark Week history.

And where is that Seal Sled today?

Well, the Seal Sled and a few other toys are in sort of a junkyard in New Zealand. It’s just too expensive to bring them back to the States, but if anyone wants to reach out to me, we can maybe make an Air Jaws museum of all of the great props and things like that.

Speaking of New Zealand and other toys, seeing Chris in the WASP (above) in Air Jaws Fin of Fury is still awesomely nerve-wracking.

I would definitely say that Chris walking around on the bottom of the ocean in New Zealand, surrounded by massive great white sharks, is the most thrilling underwater moment in the history of Air Jaws, hands down. In fact, this is a case of where we didn’t even have the best footage, because the sharks ate a lot of our GoPros right off the WASP and we missed a lot of the great scenes where Chris was being knocked over and rolled around like a bowling pin. It’s still an incredible sequence, and one of the coolest things about the sequence is that we got to meet this great white named Fred, who Discovery actually did a whole show about this year [Jaws Awakens, premiering August 10 at 10/9c]. He’s possibly the biggest male white shark ever filmed at [around] 18 ft long. And he had a huge interest in WASP, to the point where I thought he was going to peel it open like a can and suck out the juicy middle, which would have been Chris.

And then Chris went back in the WASP the next year in Walking With Great Whites and almost lost his head (above).

That was probably Chris’s closest call ever, because he just did not see that shark coming up from behind. If the shark had not touched his nose on the WASP, I think he would have gone right for Chris’ head. The amazing shot in that sequence is when Chris turns around and finally sees the shark and just ducks down at the last second. It would have been too late, but thankfully we got lucky again on that one. No one’s ever gotten hurt, so we feel good about it.

Those adrenaline rushes are unforgettable, but what do you consider the franchise’s biggest contribution to science?

The thing with Air Jaws is that we have filmed these white sharks unlike anyone has before. In so many different angles, in super slow motion. Number one is just showing the detail of how they hunt, the strategies that they use, how they approach their prey, what time of day they like to attack. We did an Air Jaws at night a few years ago, Air Jaws: Night Stalker, in which we figured out that certain moon phases affect when white sharks will hunt, and that certain battles between seals and white sharks are like a chess match: The seals would leave at 3 in the morning, and the sharks would adapt by also becoming active at 3 in the morning. A lot of scientists do not have the privilege of being out there on the water and having these great cameras, so my buddy [underwater cinematographer] Andy Casagrande coined the phrase “cinema science.” Just by having all of these sharks on film and doing all of these incredible things, you can learn a lot more about them.