Perry Mason settles into its serialized formula in its second episode, proving once and for all this is not going to be an episodic case-of-the-week affair like the original. The HBO remix is one long crime investigation story that will play out across the season in the vein of True Detective. As I said last week, the look of the show and the acting are top-tier, but the key question is whether the narrative can maintain the audience’s interest throughout eight episodes. So far, so good, but the familiar tropes risk becoming repetitive if used too frequently.

“Chapter 2” sets about expanding its cast of characters, introducing new heroes and villains for us to root for and against. There’s also continued hints towards the wider corruption taking place within the police force and the local Church. Meanwhile, Perry (Matthew Rhys) is desperately trying to find a thread, both literally and figuratively, as fingers start pointing at Matthew (Nate Corddry) and Emily Dodson (Gayle Rankin) for their alleged part in the kidnapping and murder of their son Charlie.

Perry spends the majority of the episode chasing up every loose end he can get his hands on. He questions Emily and her neighbors, looking for any inconsistencies in their accounts. It’s the first time we see his real skill as a detective and his ability to uncover every detail, no matter how small or inconsequential. He’s always snooping, snapping pictures, and following up with witnesses. Perry is the type of personality that can’t let go easily, which is both a blessing and a curse.

Memories of the war haunt him, as we see in a series of violent flashbacks to the Battles of the Meuse–Argonne, where Perry killed enemies and allies alike—a bullet between the eyes to put them out of their pain and misery. Local business magnate Herman Baggerly (Robert Patrick) later reveals that Perry was given a “blue ticket” for these actions. A “blue ticket” was a form of administrative military discharge, seen as neither honorable nor dishonorable. Herman also refers to Perry as “The Butcher of Montfaucon” and alludes to a military tribunal. Perry doesn’t give Herman the satisfaction of an argument, but these events clearly still play on the detective’s mind.

Perry is often in over his head, as many of the US troops were in the Battles of the Meuse–Argonne due to their inexperience—which, in part, led to over 350,000 casualties, including the loss of 26,277 American lives. He doesn’t always go about things the right way, or even the legal way, but his relentless approach gets results. After all, it’s Perry’s determination that leads to him finding out about Emily’s mystery phone calls on the night of the kidnapping—a development that has significant implications on the case when she is apprehended during Charlie’s funeral later in the episode. 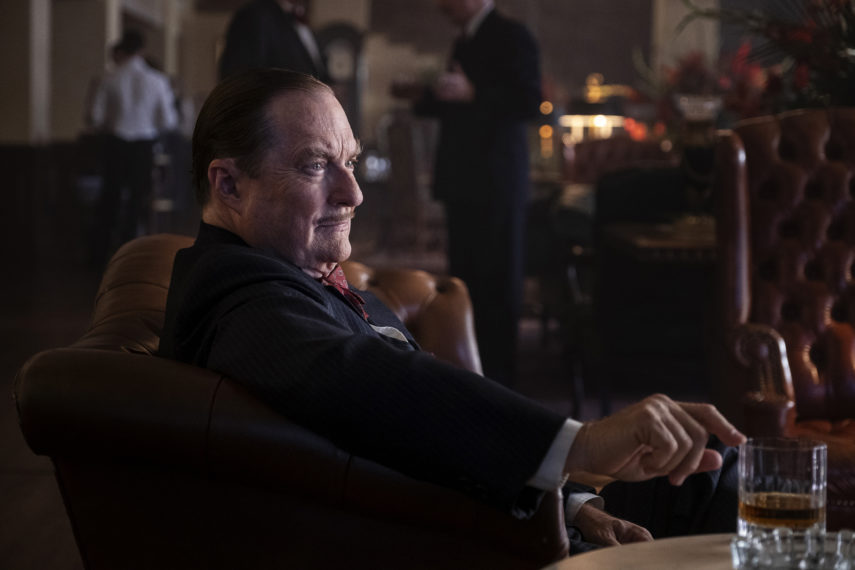 Meanwhile, EB Jonathan (John Lithgow) is humiliated by the perpetually smug District Attorney, Maynard Barnes (a delightful Stephen Root), who reveals that Matthew Dodson is the bastard son of Herman Baggerly. Maynard accuses Matthew of using the kidnapping as an extortion attempt, which leads to the distraught father’s arrest in front of a confused and flustered EB. Watching two stalwart actors like Lithgow and Root trade barbs back-and-forth is a real pleasure. Their characters are at opposite ends of the totem pole but both capable of duplicity and manipulation.

As EB tries to figure out how to outmaneuver the glad-handing Maynard, Perry, with some expert sneakiness, tracks down the identity of the man Emily has been calling. He discovers secret love letters sent between Emily and this mysterious George Gannon, who Mason finds in bed with his face half blown off—a shotgun and suicide note conveniently left by the bedside table. Mason brings this evidence to EB and the team, arguing that Emily and George were the ones that came up with the extortion scheme, thereby proving Matthew’s innocence.

It’s not exactly the tightest theory, as the humorously sardonic Pete (Shea Whigham) points out, especially the way Perry posits it. If, as Perry claims, George was the one on the phone with Emily on the night of the kidnapping, how could he also be the man caught by neighbors sneaking around the side of the house? Pete has a point, as does Della (Juliet Rylance), who declares that “infidelity is not murder.” And as much as EB would cherish the opportunity to stick it to Maynard, especially after turning down a plea deal on Matthew’s behalf, he isn’t exactly sold on the evidence nor Perry’s methods of obtaining it.

The entire scene between EB, Mason, Della, and Pete is fantastic. There’s an electric workplace sitcom-style chemistry between the four, with that brilliant blend of humor and seriousness I commended the show for last week. “I don’t reimburse for whorehouses,” EB shouts at Pete at one point, still unsure of the “degenerate” who Perry brought into the team. “I had to blend in,” Pete reasons with his new boss. In many ways, this scene kind of made me wish the series was more episodic and set around the trials and tribulations of “EB Jonathan and Associates.” I could get on board with comedy-drama set in a law office, especially since the cancellation of The Grinder.

That isn’t what we have though, what we have is a gloomy crime thriller, which means there is a lot of the familiar here: the accused parents (most likely falsely accused), the brooding detective, the crooked cops, the sneaking around dark rooms. Even the intermittent WW1 flashbacks bring to mind Tommy Shelby in Peaky Blinders. As I said up top, none of this is poorly done, I just worry that eight episodes of this could become tiring given it is so similar to other shows of its ilk. That’s why I’m hoping future episodes can lean into the ensemble law firm camaraderie to set it apart.

What does offer some intrigue is the formal introduction of two new characters. First up is Officer Paul Drake (Chris Chalk), a reimagined version of an old Perry Mason character. In the original novels and series, Drake was a private investigator and Mason’s right-hand man. This Drake is a beat cop but still skilled in investigating, as we when he combs through a murder scene—the same place where Detective Ennis (Andrew Howard) killed the kidnappers. Drake tracks the blood spillage through the hall and up onto the roof of an apartment building where it suddenly stops. Drake is good at his job, but as the only black officer on the force, he is undermined and underutilized. “There are no black detectives,” his colleagues tell him, in no uncertain terms letting him know to stop doing their job and stick to the beat, breaking up domestic disputes and dealing with unruly neighbors. His report is taken and altered under the remit that it was incorrect. As Drake tells his wife, it wasn’t incorrect, and his suspicions lead him back to the scene of the crime where he finds the remnants of a third body in an alley beside the building. In the stairwell, a pair of false teeth, just as Perry finds stuffed in George Gannon’s mouth.

Then there is the charismatic Sister Alice (Tatiana Maslany), who, after seeing in pictures last week, is introduced on stage delivering a body-rattling sermon. You see, Sister Alice is more than just a preacher; she is a showwoman. She strides across the stage, instantly drawing attention with her movie-star good looks and Marilyn Monroe blonde hair, commanding the audience with every inflection or expression. Her words emit energy into her parishioners, who are conditioned into filling up the collection plates.

But you get the sense early on that something isn’t quite right with Sister Alice. There is a quiet contemplation when she sits alone, but on stage, she becomes possessed, as we see when she’s tasked with sermonising at Charlie’s funeral. Her “blessed are the mourners” speech turns into something altogether more dark and unforgiving. Moving from comforting Emily, Alice turns her attention to the “powerful men” in the front seats. “The devil put Charlie in this box,” she screams as she calls on the police and prosecutors to do their jobs. “Blessed be the hangman who will snap his neck…” she roars. It’s a sinister, vengeful turn for a funeral to take. “What was that?” her mother mutters afterward.

So what is going on here? Is Sister Alice masking a dark side? Does she know what happened to Charlie? Or is she just a charlatan, profiting off the misery and fear of others? I’m sure Perry will attempt to get to the bottom of it soon, as the look he exchanges with Alice towards the end of the episode suggests their paths will cross very soon. And I’m all in on Rhys and Maslany lighting up the screen together. Even if some of the material is familiar, these actor combinations are fresh and exciting, and that in itself makes the series worthwhile.