It’s only been a few months since Criminal Minds ended its 15-year run on CBS, but you probably already need your BAU and UnSub fix, right?

After all, there’s nothing like spending some time with your favorite profilers and their tech queen from the FBI’s Behavioral Analysis Unit as they hunt down serial killers. And thanks to summer-long marathons on WE tv from Saturday, May 23 through Monday, September 7 — back-to-back episodes air Saturdays from 10am/9c to 1am/12c and Mondays from 4/3c to 1a/12c — you’ll get not only fan-favorite episodes, but also never-before-seen interviews with the cast, villains, writers, and producers.

What about the series do you think resonated with viewers for 15 years and still does now, whether they’re rewatching it or discovering it for the first time?

Kirsten Vangsness: Our authenticity and our chemistry is undeniable, both as human beings and the characters. When you add intrigue and mystery to that … You can’t bottle our — they made a two-season successful spinoff, and then they made another one — but it was this group of people, this specific cocktail of people, add in a couple — what did we call our last group, you guys? 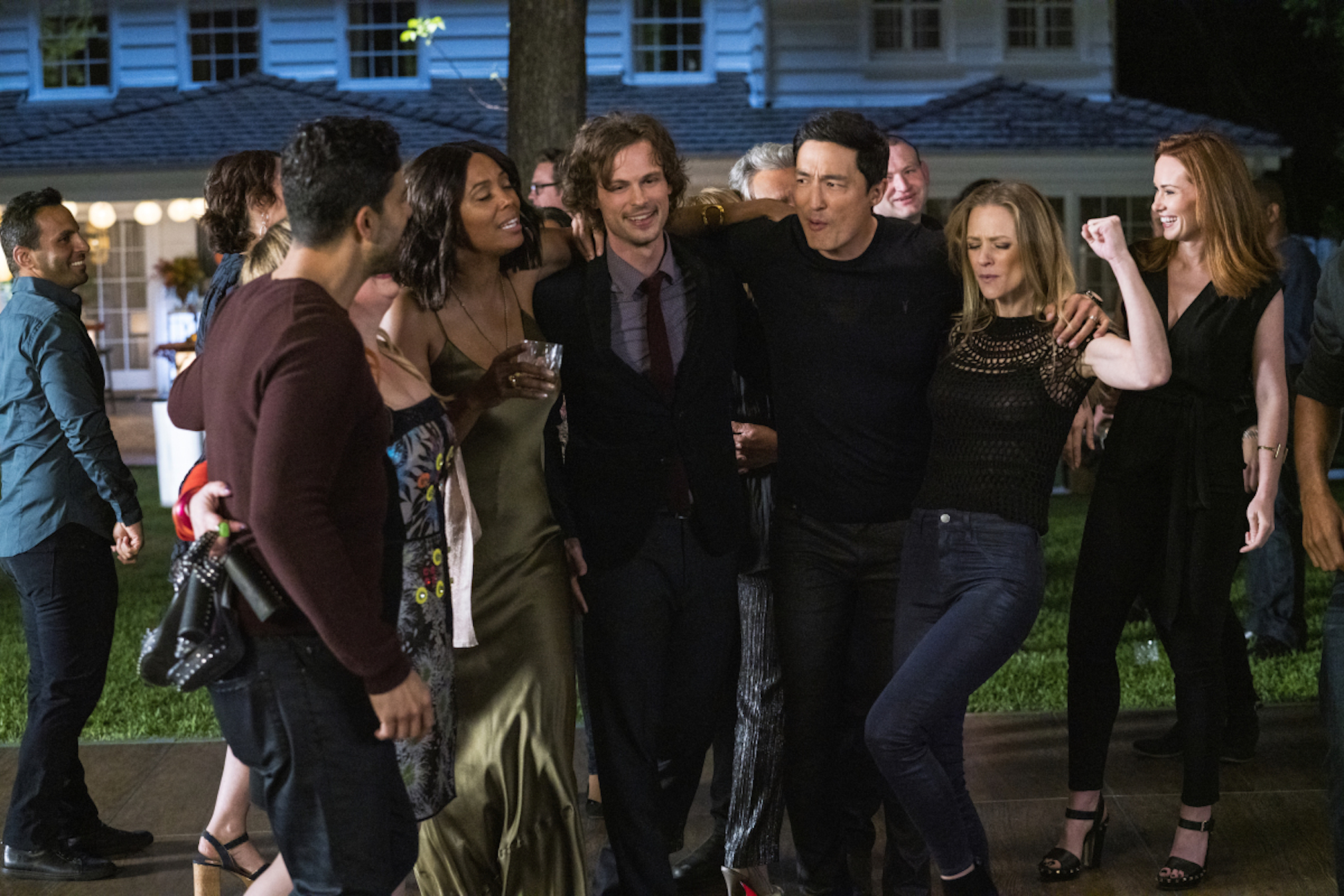 Vangsness: Our bond is undeniable and people want to watch it.

Mantegna: If you can bottle it, like Kirsten said, you would, but it’s difficult. That chemistry is a whole thing and everything has to fit and work and do your best and put it all together, and if it works, it works, and apparently for 15 seasons, it did. Hats off to everybody involved, from the top to the bottom, even the extras. We had people who were extras for 15 seasons, and they did a great job. Everybody contributed.

AJ Cook: It takes a village, and what a village it was.

Cook: Number one, there’s 15 seasons, so there’s lots to get through, and for whatever reasons, we as humans are fascinated by serial killers. It’s just always been that way. With our show, there’s lessons to be learned in a way. You maybe learn something that you didn’t know before, where you feel a little more protected out in life afterwards. Vangsness: There’s something about like, even if you’re all upset, you’re freaked out, you don’t have a job and you’re worried that you’re going to get some sort of weird, unknown virus, you can be like, “At least someone’s not trying to gouge my eyes out.”

Cook: “My day’s better than that guy’s.”

Mantegna: What set us apart from a lot of other shows is that we weren’t just about the evidence and the crime. It was about the mental thing, that’s why it’s called Criminal Minds. It was about what were these people thinking —

Mantegna: What’s going on in their brains. The psychology. That’s what people find intriguing. That’s partly why we have a huge female audience. A lot of women liked our show, and I really believe it’s because, well first of all because I think they’re smarter than guys, and second of all, just because they wanted to understand. A.J. touched on this, the educational aspect to it. “I want to learn about this. I see this as intriguing, and maybe I can see something here that could help me avoid a situation or something like that.” Your characters had quite the journeys: JJ from media liaison to profiler, Garcia from the team’s tech queen to being the one to leave the BAU behind, and while Rossi maintained the course when it comes to his career, he found a way to balance his personal and professional lives. What moments led your characters to where they ended up?

Vangsness: For me, when Morgan left. I felt like as an actor that the whole reason I even had a job was because this really charismatic wonderful actor named Shemar Moore shone his light on me and then I was surrogately almost brought into an audience of like, “Oh, he loves her, we love her.” Then when he was gone from the BAU, Garcia didn’t know how to identify herself. I think she was a little mad at herself for having a crush on this guy for a long time.

She’s never going to adult herself up [or say], “I’m going to go be able to understand violence or pack some heat.” But it did help her be able to stand up a little straighter and be on her own and be like, “I’m more than just —

Vangsness: “I’m going to grow up in a good way.”

Mantegna: The fact that I got married three times and it didn’t work out until I basically had to remarry the third wife, I liked that whole arc, that it showed that personal side. For 13 seasons, Rossi didn’t have that thing to go home to or that part of his personal life was a void and it got resolved. Ironically, I end up with the person you would have least expected, the person I was married to for 24 hours 20 years prior. I enjoyed that, and I’m glad it happened late in the run of the show and put a little exclamation point on my character. Cook: For JJ, the obvious thing is when she went away. A lot changed for her when she came back. One of the quotes we used on the show [in Season 5’s “Risky Business” is] “Experience is a brutal teacher but you learn, my God do you learn” [from C.S. Lewis]. All of the life lessons that JJ had to go through, it helped her grow up and really come into her own and become that mama bear and to step into a fuller version of herself.

That really started JJ down a more fuller path. She started having kids, and we saw the mama bear side of her come out. She got into some pretty crazy stuff outside of the BAU, which informed her life decisions after that. I’ve never been bored playing JJ. She’s just constantly evolving and it’s been a real treat to get to play someone for that long that you can see evolve like that. A real gift being on Criminal Minds for as long as we were.

Where do you each imagine your characters in five years both professionally and personally?

Vangsness: Garcia is married to Luke Alvez, and they probably have twins. She’s working back at the BAU, but she only works two days a week because she’s found out she can do all the stuff she needs to do in a shorter period of time.

Cook: You put thought into that.

Vangsness: I did. I’ve been working on it for when they bring the show back. Mantegna: Rossi decided not to retire, so he had to work that out with Krystall. He went back for a little while. He was where he belonged. It was a good set-up if they want to come back. All the things are in place for us to do a sequel or a movie or one last hurrah or whatever.

And would JJ be leading a team?

Cook: I don’t know, and that’s why I had so much anxiety about the show ending. That’s why I have no closure. I’m not sure. I feel like where we left, JJ was still completely torn as to what she was going to do. I like to think that she probably felt like she owed it to Will, to her husband, to go and give that a shot in New Orleans. Maybe she went, tried that out, everyone realized, “not so great,” and she’s right back where she started, at the BAU, and in a better place, knowing that wasn’t the right move for her.

The team blew up the jet in the finale, but before doing so, we learned about secret compartments. What’s one special feature your characters would have wanted on the new one?

Cook: You know how the seats pull down into a bed? [JJ’s] an exhausted mom that’s going 24/7. I know the only time I sleep like a champ is on an airplane because I know that there’s nothing you can do about anything. I’d like to think JJ would just conk out every time she was on the jet after a case.

In the finale, Garcia left a note in her office, and according to Erica, we’ll never find out what it said. But if JJ and Rossi were to leave notes behind, what would they say?

Mantegna: I’d use the Schwarzenegger line: “I’ll be back.”

Cook: Joe, that’s exactly what I was going to say. “Hopefully, smiley face.”

Kirsten, you wrote, and AJ and Joe, you both directed. What made this the perfect environment and show for you to each do that?

Cook: It’s just a breeding ground for love and support. There was no safer place I could have dreamt up or imagined for me to direct for my first time. It’s just such a great energy and people are supportive of one another. We believe it’s building each other up that gets things done and not the tearing down of one another. That’s why it was such a beautiful place to come and work and play every day because you felt safe. That’s why the show ultimately became such a great show in the end and why people feel a connection to it because we felt safe to just be and to create and bring a great show to everybody each week.

Mantegna: Perfect answer. I agree with that, 100 percent. Vangsness: Yeah, it was so supportive, and it was just like, “Yes, go!” I didn’t know anything about writing TV, and I don’t even really feel like I still do, and I felt like exactly who I am was what was being celebrated. Exactly what I can bring to the table is what’s like, “Yes, yes, go, go,” and I feel like that’s true for all of us.

Which UnSub was the creepiest and which left a lasting impression?

Vangsness: Tim Curry. He was the one that creeped me out the most. [Cook and Mantegna agree.]

Cook: There was something about the Reaper too because it was so personal to all of us.

Mantegna: Yes, the fact that he killed [Hotch’s] wife, and [C. Thomas Howell] did a wonderful job.

Cook: Oh, he’s such a great actor. And I also love Michael Mosley, who got to play our Chameleon, very personal with Rossi. He was fantastic to work with.