Fox is taking reality dating shows one step further this summer with Labor of Love.

On the new series, premiering May 21, Kristy Katzmann — whom you might recognize from Season 11 of The Bachelor — isn’t (necessarily) looking for love. Instead, she wants to start a family, and 15 men are competing to be the potential father. Sex and the City‘s Kristin Davis is by her side to help guide her through it all. Can you talk about coming up with this idea and how early in the process you had Kristy in mind?

Laurie Girion: This is an idea that [production company] Propagate had in the works for a while in terms of realizing that this was a new time and women were empowered to make choices about how they wanted to fulfill their dreams of becoming mothers. [They wanted to] come up with a show that could be entertaining but also positive and give legs to that idea. We partnered up with Full Picture, who really helped us crystalize this vision.

Kristy came in the casting process as we sought to find the right woman, and all of us fell in love with her pretty early on. When you watch her, she is everything we could have wished for. She is strong and intelligent and beautiful and very open about where she is in her life and going through this process. She was really everything we could’ve hoped for in a heroine and more. And what makes Kristin Davis the right host?

Anne Walls: Everything about this show is reinventing and reinvigorating the messaging of: What does it mean for someone to have it all? There’s not one way to do that. We wanted to explore every avenue, so it was important to us to find a host who obviously was someone people could trust, who felt relatable. The best hosts are people that someone feels like they already know.

But also really important to us was that Kristin Davis herself has children in a way that worked the best for her. It’s something we wanted to really show. Kristin Davis is someone who is so empathetic and so wonderfully in touch with connecting with people. [She and Kristy] formed a special bond that was nice to see. She’s just really warm, and something special you see as the show goes on is she guides Kristy because she helps her feel like she’s not alone.

Spike Van Briesen: More than just a host, what we wanted Kristin to be is a best friend. She was the perfect person for that. She’s relatable and classy and just such a powerful woman herself. They really bonded and journeyed through it together.

Girion: Sex and the City is such a touchstone for American women, and there’s nobody on earth you want to be friends with except one of those women. It’s such a touchstone of female friendship, so we felt incredibly lucky when Kristin decided to do this with us. What did you keep in mind when choosing the 15 men?

Van Briesen: Picking the men was a huge process. We had scouts all over the country. What we really wanted first and foremost was men who wanted to have the conversation about becoming parents. We also wanted men who were suitable for Kristy. We didn’t want the typical things that you might see on some dating shows, just super good looking, personal trainers, and all of that. We wanted substance with the men; we found doctors and lawyers and CEOs.

One of the biggest questions that we would ask them is — they were all very professional and established — was how much time had they taken in their careers to become who they are, where are they in their lives? They said they went to school and they worked very hard in their careers and they’d taken the time to figure out exactly what they wanted.

Then we asked them how much time had they taken to think about becoming fathers, and it was really a cold-water moment for them. Because as a man, I thought about it, but I don’t know if I put as much thought into it. And when we asked them, you could just see the wheels start turning, and [how they responded] is a lot of how we knew if they were the right choices.

Some of them really took this to heart because on the show, we would take their mobile devices away, so they didn’t have a lot of contact. What they did have is this time to really think about becoming a father. The results we got are some of the most compelling stories that I’ve heard from men on television in a long time.

What were some of the boxes you wanted to check off with the challenges?

So that had a different layer when we were building out the challenges: What are the different aspects of being a father that you want to test? Do we want to test courage? Strength? Smarts? Sense of humor? These all became elements layered into what normally might be more of a dating-style challenge. Let’s talk about the elimination process and the Big Board of Men. Why did you decide to have the men see the moves Kristy makes when she decides who’s staying and who she wants to talk with?

Van Briesen: We sat down and thought, what haven’t we seen before? In any dating show, there’s an elimination process but [usually] whoever’s eliminated says, “It’s been great to spend this time with you,” and then they just leave. You don’t hear what they’re thinking. We wanted to really come up with something that would get both sides.

We actually created an app, for lack of a better term, that would allow Kristy and Kristin to access the men’s profiles, watch certain videos of them, see what they’re all about, all of their pictures. As soon as Kristy would go onto this app, it would alert the men in the house. 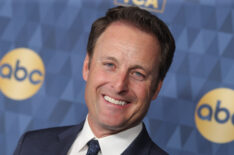 We just thought it was really fresh and fun to approach it that way so that you got both perspectives at the same time. So when Kristy does finally eliminate someone, you got a little insight on that, and you could see the nerves in the men and how much they really wanted to be there.