The final round of Fuller House episodes are on their way.

After debuting Part 1 in December of 2019, Part 2 will arrive nearly six months later on Tuesday, June 2, 2020. All nine episodes will arrive globally that day, as the Tanners bid viewers farewell one last time. Relive your favorite moments and look ahead in the new trailer for the final episodes (below). 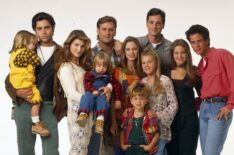 Why You Won't See Michelle Tanner on 'Fuller House' Season 5

Debuting back in 2016, the Full House spinoff focuses on the adult daughters of Danny Tanner (Bob Saget) — D.J. (Candace Cameron Bure) and Stephanie (Jodie Sweetin) — along with their family friend Kimmy (Andrea Barber). Following them through the ups and downs of adulthood with their own kids in the mix, the show served as a nostalgia trip for fans of the original ’80s-’90s series.

In the final set of episodes the women will attempt to pull off a triple wedding after becoming engaged to Steve (Scott Weinger), Jimmy (Adam Hagenbuch) and Fernando (Juan Pablo Di Pace). Will they be able to pull off the feat?

Viewers will have to tune in to find out — don’t miss Fuller House‘s final episodes this summer when they arrive on Netflix.