‘The Goldbergs’: Is This Erica’s Worst Spring Break Ever? (VIDEO)

Erica Goldberg (Hayley Orrantia) just may be wishing that social-distancing was in effect for her spring break misadventure that we’ll see in Wednesday’s all-new episode of The Goldbergs.

In this week’s installment of the ABC comedy, “Island Time,” Erica along with brother Barry (Troy Gentile), boyfriend Geoff (Sam Lerner), and the JTP are excited about their spring break trip but, of course, this is The Goldbergs so do you really think things go well? 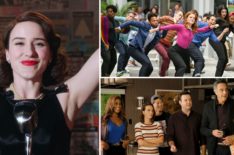 Get your daily dose of joy by watching a TV comedy.

Orrantia tells TV Insider, “This episode was one of my favorite to film in Season 7. The gang goes on spring break to a not-so-fun destination and Erica gets food poisoning on day one. I often get told that people love my character’s ‘gag’ joke that we do in many episodes and needless to say, there will be many in this episode!”

ABC sent over an exclusive clip, which shows some early signs that things aren’t going to go well, especially for Erica, who unfortunately ate something that isn’t agreeing with her.

Watch the exclusive clip above!