What to Know About ‘Vagrant Queen’ Before the Syfy Show Premieres

If the conclusion of Star Wars’ Skywalker Saga left you craving other space operas centering on orphaned scavengers, you’ll want to tune in to Syfy on Friday, March 27, for the series premiere of Vagrant Queen.

The new show, described as a “fun, violent, snarky, space opera,” is based on the 2018 Vault Comics series of the same name by author Magdalene Visaggio and illustrator Jason Smith, who later teamed up on a sequel series titled Vagrant Queen: Planet Called Doom. Based on the Vault Comics series, it has an all-female team of writers and directors and stars Adriyan Rae, Tim Rozon, and Alex McGregor.

The comic series’ tagline neatly sums up its premise and tone: “They took her throne. She told them to keep it.”

The “she” in question is Elida, a former child queen who was dethroned at age 10. Since then, she’s been eking out a living as a scavenger while zipping around the galaxy to escape the Republic forces who want her dead. But now, startling news about her family is bringing her back into the Republic orbit. “If Star Wars was directed by the Coen brothers, you’d have Vagrant Queen,” Vault raves.

Syfy’s synopsis teases a bit more about the storyline, if you don’t mind a few minor spoilers:

Vagrant Queen follows Elida from child queen to orphaned outcast, as she scavenges the treacherous corners of the galaxy, always one step ahead of the Republic government out to extinguish her bloodline. When her old friend Isaac shows up claiming her mother Xevelyn is still alive, they head off with their new ally, Amae, to stage a rescue that will take her back into the perilous heart of her former kingdom and up against a deadly foe from her childhood, Commander Lazaro.

In the show—which was filmed in Cape Town, South Africa—Light as a Feather star Adriyan Rae plays Elida. Tim Rozon, an actor Syfy fans will recognize from Wynonna Earp, plays Isaac, “a charming, deadbeat Canadian” who is “desperate to make enough cash to buy his way home.” And Of Kings and Prophets actress Alex McGregor plays Amae, “a skilled mechanic and pilot with an intelligent and caring soul who is always looking out for the little guy.” For Visaggio, a GLAAD Media Award-nominated writer known for her work on the Kim & Kim and Quantum Teens Are Go comics, the Syfy adaptation “has been an absolute bizarre whirlwind,” as she told Syfy Wire in July.

“I first heard that there was interest from Syfy in November [2018], and suddenly there was a pilot script in my mailbox and it was so good,” she added. “Jem Garrard, the showrunner, who also wrote about a third of the episodes with Mariko Tamaki and Mika Collins, really nailed Elida’s voice and the vibe.” 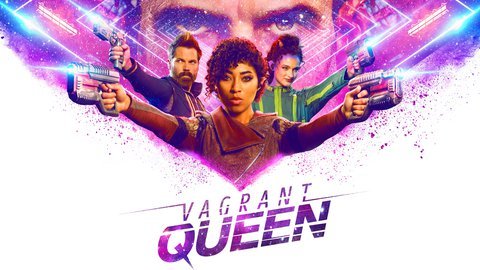