For 27 years, from 1991 to 2018, The Jerry Springer Show was a tabloid talk favorite that would often devolve into chair-throwing, hair-pulling combat. Now, the wry ringmaster who famously brought together cheating lovers and spurned spouses keeps order with a gavel — and no bodyguards! — on the syndicated series Judge Jerry, recently renewed for a second season.

Springer, 76, arbitrates small-claims cases from behind a courtroom bench; the lawyer and onetime mayor of Cincinnati quips that his wife of 46 years calls this “‘the first time I’ve ever seen your name and the word honorable in the same sentence.'” Springer tells us how he lays down the law. 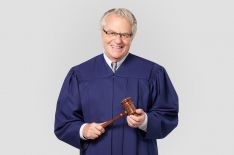 You’ve said you hadn’t opened a law school textbook in over 40 years. What is it like trying cases?

Jerry Spinger: I love that it’s cerebral. These people come from all over the country, so you’re applying different [local] laws. I really do study it. It doesn’t matter what the dollar amount is, the human puzzle is still the same. When someone files a small claim for $5,000, they’re living and breathing it.

There’s a lot more intensity. So even though I joke around, I still have to be serious about the decision I make because it’s binding. Also, small claims isn’t just about the letter of the law. You can think of fairness. You want to have a sense of justice. Have any of the litigants gotten riled up like the unruly guests on your talk show?

If they get too out of hand, I’ll slam down the gavel. On one case, the plaintiff and the defendant were both talking over each other, and I said, “I got an idea. The next person who talks without me asking for a response to a question loses the case.” And, boy, did they shut up! [Laughs] I don’t use that remedy too much, but it gives me authority I never had before.

We also see you hug and high-five some of the litigants. Are you less stern than other TV judges?

I don’t play the tough guy because I’m not that person. You’ve got to be who you really are. I’m a softie, not a hanging judge.

Was there an advantage to staying above the fray in your Jerry Springer days?

Since I never got into the fight myself, I wound up representing every viewer at home watching.

In 2002 you topped TV Guide Magazine‘s ranking of the 50 Worst TV Shows of All Time. What was your reaction?

Clearly, I deserved it! I kept thinking about the poor show that came in second place. Because if you’re the second worst ever, no one remembers you. If you’re going to be in a contest, for God’s sake, win it!