AARP-tastic! Martin Sheen and Sam Waterston have built their careers on sobering TV dramas—Sheen as idealist President Josiah Bartlet on The West Wing, Waterston as irascible litigator Jack McCoy in the Law & Order franchise. But now the two stars are cutting loose—and having the time of their lives—as a pair of daffy septuagenarian lovers in the Netflix comedy Grace and Frankie. The series kicked off last year with Robert (Sheen) and Sol (Waterston) revealing their secret 20-year affair to their utterly gobsmacked wives, Grace (Jane Fonda) and Frankie (Lily Tomlin). Now, as Season 2 begins (streaming Friday, May 6), the guys are all set to get married. But which one will carry the bouquet? Sheen and Waterston gabbed with us about love, death and the perils of going gay for pay.

You’ve both turned 75. How does it feel to finally be getting the laughs?
Waterston: It’s the coolest thing that could have happened. I started my career on the stage doing nothing but comedies and was really scared no one would take me seriously. I struggled and struggled to get into drama and finally succeeded—then nobody would let me tell a joke!
Sheen: Sam and I aren’t comedians. We’re not smart alecks or show-offs. We’re just ancient dramatic actors who are smart enough to know that the funniest thing you can do is play it straight.
Waterston: Comedy is an expression of optimism—in this case, optimism about being old. That’s an incredible thing to be putting on TV.

Last season ended with Sol and Frankie having sex in a wrong-headed attempt to bring closure to their relationship. When the show returns, he’s in a panic to confess his infidelity to Robert. Is that wise?
Waterston: I’m not so sure it’s about honesty. [Laughs] More like bad judgment! These geezers lived a lie for most of their lives and Sol can’t spend one more day like that. I love that about him, but I’m not sure a confession is such a good thing here. This wonderful relationship could blow up in their faces.
Sheen: Don’t forget Sol discovered that Robert had been unfaithful to him early in their relationship—so the cheaters have both cheated on the one they cheated with. But there are no villains here. Just good, decent, lovable people who are very clumsy and messy as they try finally to live honest lives.

Why is a wedding so important to them?
Sheen: It’s the show’s nod to the gay community, one that says commitment is equally as important as sexuality. We want to embrace and honor marriage as a sacred union.

Yet your series isn’t always so politically correct. In Season 2, Sol freaks at the idea of playing drag queen bingo, claiming he and Robert are “not that kind of gay.”
Sheen: And it’s offensive. Sometimes you have to go off the rails to make a point.
Waterston: Our characters are not just trying to figure out what it means to be gay in 2016. It’s more like, what does it mean to be gay this week? Don’t we all feel that way? Things change so rapidly nowadays that you can’t keep up. We’re all trying to figure out how—or if—we still fit into this crazy new world. 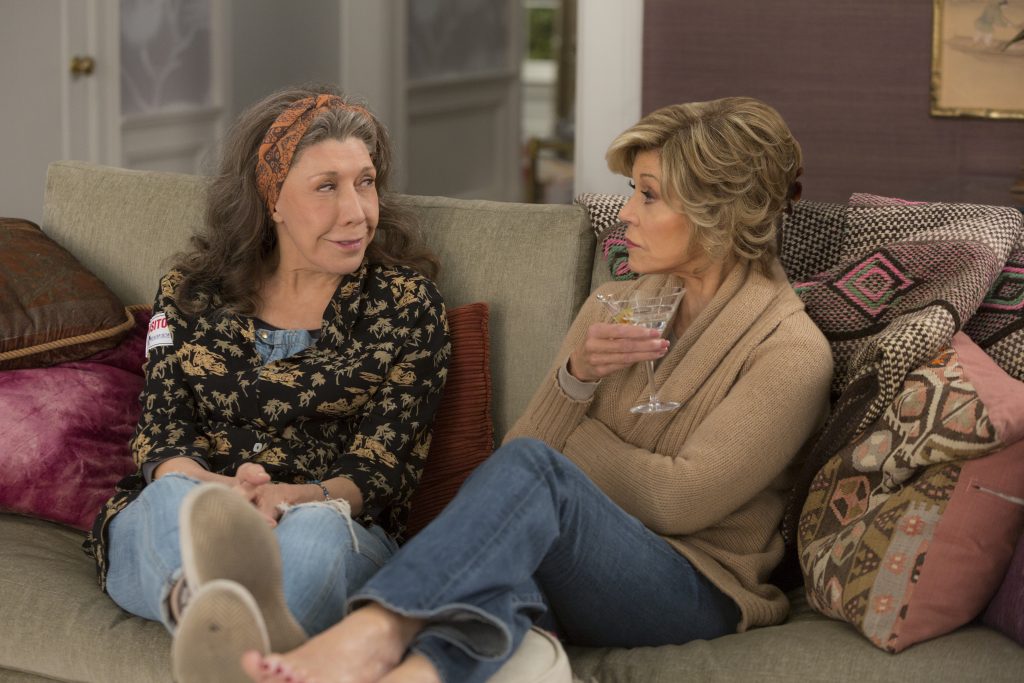 Word is, you guys have objected to some of the sexuality on the show. True?
Sheen: I admit it. I am a Catholic and I am a prude. I don’t like pornography or even risqué stuff. I am not going to say the F-word. Last season, I refused to climb on the giant mechanical phallus [at Sol and Robert’s bachelor party]. The script called for Sam and me to ride that thing and we both said, “Nope, not gonna do it.” It was juvenile and we would have lost our dignity.

Mortality rears its head when Robert has a heart attack this season. Martin, didn’t you have a quadruple bypass soon after shooting that?
Sheen: Yes and, no exaggeration, I owe my life to Grace and Frankie. When we got the pickup for Season 3, the producers told us we all needed to have a complete physical—blood tests, stress tests, the whole nine yards. And thank God for that, because I found out I was in really bad shape. I could have been dead on a sidewalk somewhere.
Waterston: The best, most marvelous thing about our show is that it’s a reminder of how precious little time we all have. It’s something we feel deeply on the set. Jane, Lily, Martin and I report for work and basically laugh our way through the entire day. It’s such a pleasure at this stage of our lives to finally be over it—over the business and especially over ourselves. [Laughs] We’re just glad to be alive!