Looking for a gripping TV thriller? Look no further than USA’s The Sinner, which returns for its third season on February 6, and, like a good rollercoaster, it’s guaranteed to toss you at every twist and turn and have you begging for more. Seriously.

The compelling story of the new season is different than previous ones where a protagonist — for example, series executive producer Jessica Biel, who starred in the first season — does something horrible, but for reasons out of their control or consciousness. Season 3 heads in a different direction with Jamie Burns (Matt Bomer), a teacher at an all-girls NYC private school who may not be so innocent in the choices he makes throughout the drama’s jaw-dropping mystery. What sends Jamie on this journey? The unexpected arrival of an old friend, Nick Haas (Chris Messina), in the season premiere. Nick shows up on the doorstep of Jamie’s home with his pregnant wife, Leela (Parisa Fitz-Henley), and it’s not exactly a warm reunion as we quickly learn of the complicated history between the two men. What happens throughout the rest of the night is only a jumping-off point for the mystery.

In the midst of all this intense drama is one familiar face in The Sinner — Bill Pullman, who returns as Detective Harry Ambrose. Harry will soon be sniffing around a certain car accident that happens in the season premiere that claims a life but also raises a whole lot of questions. TV Insider recently chatted with Messina (who’ll be seen in the Birds of Prey film opening February 7) about his part in the season, working with Bomer, and how the cast prepared before cameras rolled on the intense series. Read on!

What were those first chats with Derek [Simonds, executive producer] about the season and your character?

Chris Messina: It was more just an open conversation. Obviously, Derek has an arc of a season that he’s set to paper but he’s very, very collaborative. Sharing it with you, where his head’s at, where he’s at and where he’s going and then [he’s] open for ideas. Derek and I knew each other a little bit before so we just jumped in there. We were constantly emailing each other, calling each other, and texting each other. Through those kinds of conversations, I started to get more on board and understanding who these guys [in the story] were and the journey of the season. When you have somebody like Derek, who’s so smart and so kind and open, you feel like you’re just dreaming. You’re like, “Don’t wake me up. I’m having a truly good dream.” I have this great dance partner. 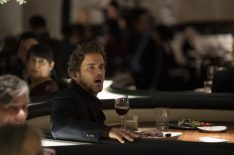 From the first time you see Nick show up at Jamie’s doorstep, you sense there’s a not-so-great history there. How would you describe the relationship between Nick and Jamie?

Maybe it’s a corny term but “soulmates” is the first thing that pops up. I guess we all have those people that, no matter where you are in your life, whatever storm you’re weathering, you know they’re your buoy. They see you and you see them. They allow you to be you and you allow them to be them. There’s no filter to it. I think it’s that and then something I’m not smart enough to explain… a kind of chemistry.

Derek and I talked a lot about male intimacy and how it’s not necessarily sexual, even if you initially think that’s where things are headed.

It is a real intimacy that I don’t know if you get to see on screen as much. You can see that there’s such a loneliness to both these men in different ways, but in a way, they’re one. They’re two parts of one thing. And to work with Matt… I knew his work and he’s a terrific actor, so I was excited to do this with him. I couldn’t have asked for a better dance partner than that. He’s also such a lovely man. He’s a pro and he’s such a talent. He works his ass off … It’s a lot that he has to carry in [this role], it’s extremely demanding. [But] he’s never complaining, he’s just always going like, “This is great. What a great opportunity this is.” There’s stuff that always trickles down. Talk about shooting the car crash that happens in the first episode. How challenging was that particular scene for you?

[The crew] made it as comfortable as they could helping me in the car, helping me out of the car. I think the hardest part of that particular scene that comes to my head is because in television, most TV, you have different directors. We were in the car with one director and then at 12:00 or 1:00 in the morning, covered in all the makeup and hanging out, a new director came in to direct another part of the scene that’s in a different episode. I’ve never had that experience before but we were in the middle of a scene and then the scene carries on longer in another episode. Does that make sense? Both directors were great but I’ve just never had that experience before. When I was on set in New York in December, I heard there was time for the cast and Derek to get together before shooting began. Were you a part of this, too?

I was and it was such a beautiful, rare thing. Derek has a teacher that I also work with. That’s how I know Derek a little bit before this — Kim Gillingham, she’s an incredible acting coach and teacher. She spent a week with us working and she works in dreams. I worked with her in the past privately on my own but to have her come in and lead a cast and lead the directors and lead Derek and have us all in there, it was very, very intimate. It created so many things that were used and came out in the season, so it was phenomenal. It was like we were a theater troupe, you know?

Last thing, if somebody asks you, how would you describe this season of The Sinner?

I’m so bad at that but I’ll try. [Pauses] It’s a season about letting go. I couldn’t be more proud to be a part of this team. Besides the writing and the cinematography and the style of the show, [we have] Bill Pullman, who I think is doing some of the greatest work on TV right now … both the first and second season. Bill was a huge, huge aspect and reason why I wanted to do this season of The Sinner.