Despite having no host, the 2019 Emmy Awards lived up to ceremonies past as it produced plenty of unexpected and buzzy moments.

With stars from TV’s biggest shows — Game of Thrones, This Is Us, The Marvelous Mrs. Maisel, Fleabag and more — in attendance, TV’s biggest night was nothing short of memorable.

Long after the onscreen festivities ended, viewers and celebs alike will be talking about TV’s biggest night. Below, we’re rounding up the highlights of the evening.

Bryan Cranston on the Spot

The actor was taken by surprise when he was pushed out onto the stage during the host-less monologue which also included appearances by Anthony Anderson and Homer Simpson himself.

In a funnier moment, Ken Jeong got the audience to participate in a Tik-Tok video, joking that he could finish his acting career now and return to medicine (he used to be a doctor). Phoebe Beats Julia for Outstanding Actress in a Comedy

Phoebe Waller-Bridge beat out past multiple winner Julia Louis-Dreyfus (Veep) for her role in Season 2 of Fleabag and it was more shocking than her win for best writing earlier in the evening.

Kim Kardashian West and Kendall Jenner elicited laughter from the audience when presenting the reality series award when they mentioned said they were “real people telling real stories about themselves.” The moment didn’t go unnoticed online by viewers who were quick to make jokes.

The cast of Game of Thrones came together on the stage to present Outstanding Supporting Actress in a Limited Series or TV Movie, and while there, they expressed their gratitude to fans and viewers. 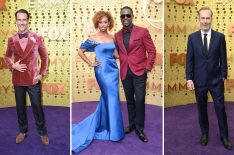 Emmy Awards 2019: See All of the Red Carpet Arrivals (PHOTOS)

It's the biggest night in television, and the stars are looking their best!

When Patricia Arquette accepted her award for Outstanding Supporting Actress in a Limited Series, she made a plea for the trans community while mourning the loss of her sister, Alexis Arquette.

Like their fellow HBO series Game of Thrones, Veep‘s cast reunited on stage to present an award and brought the laughter when Julia Louis-Dreyfus joked that she though she’d be the only one on the stage.

When Michelle Williams won for her performance in Fosse/Verdon, she used the platform to praise her treatment on set during the production and how she received equal pay. Her message concluded by encouraging other women to request no less than equal treatment themselves. Did Thomas Lennon's Commentary Make up for a Hostless 2019 Emmys? (POLL)

In a more lively moment from the evening, Adam Devine serenaded the audience during one of the Variety awards.

In his fourth win for Outstanding Supporting Actor in a Drama Series, Peter Dinklage was rather loose with his language garnering a lengthy mute from censors.

Ozark‘s Julia Garner took viewers by surprise when she beat out the four fellow nominees from Game of Thrones as Sophie Turner, Gwendoline Christie, Lena Headey and Maisie Williams were strongly favored to win.

When Billy Porter won for Outstanding Actor in a Drama Series his resulting dance was filled with so much joy it was impossible to feel anything but happy as he accepted his award.