Your Guide to Wrestling on TV: ‘NXT,’ ‘Smackdown’ & ‘All Elite Wrestling’

Let’s get ready to rumble! In this corner, we’ve got professional wrestling’s reigning heavyweight champion, industry behemoth the WWE! And in this corner, the scrappy challenger, new blood looking to snatch the title: All Elite Wrestling!

Hold on to your remotes, because this season is a welcome free-for-all for the sport. World Wrestling Entertainment’s long-running SmackDown makes the jump from USA to Fox (where the show’s title will be WWE Friday Night SmackDown). USA is importing WWE NXT from the WWE’s streaming platform to join the network’s flagship, WWE Monday Night Raw.

After four successful pay-per-view events, recently launched league AEW will debut on TNT. Throw in cable net AXS TV adding Impact Wrestling to its mix, which already includes New Japan Pro Wrestling and WOW—Women of Wrestling, and the over-the-top sport that’s given us The Rock and John Cena is clearly having another major moment. But why now?

One possible answer: In the era of DVRs and streaming services, traditional networks need ways to attract live viewers. “Live sports is the most valuable property in entertainment,” says WWE legend Paul Levesque (aka Triple H), now the league’s executive vice president of talent, live events, and creative. “Something that is successful, like WWE, can be massive.”

With the boom in mind, here’s your guide to the fall’s three biggest bows. Chad Gable Is Ready, Willing and Able to Become WWE King of the Ring

The expanded two-hour live show, which premiered September 18, retains the grittier tone of its proving-ground days, Levesque says. While Smack-Down and Raw tend to feature a wide range of matches — some comedic, some dramatic — and larger-than-life ring-side drama, NXT focuses on the fireworks inside the ropes.

“The athleticism tends to be more intense,” Levesque says. “You see talent who are younger and hungrier and trying to make a name for themselves.”

Watch for a diverse stable of wrestlers with their own unique styles, like reigning men’s champion Adam Cole and the chiseled Prince-inspired Velveteen Dream. The MMA-style moves of ladies’ champ Shayna Baszler and aerial antics of Japanese sensation Io Shirai are also not to be missed. SmackDown‘s highly anticipated arrival on the sports-oriented Fox is a major turning point for the 20-year-old brand. Fans can still expect two hours of live wrestling matches, 52 weeks a year. But, says Levesque, the new incarnation will be much more distinct from WWE’s other signature series.

“Over the years, I think Raw and SmackDown have become [synonymous],” he admits. “If you saw one, then you [were] kind of seeing the other.” Not any-more. Fox’s SmackDown will feature a roster of talent that rarely crosses over with USA’s Raw. “You will know these are your heroes, these are your villains,” he says. The first openly gay female superstar in WWE history teases what to expect for Season 9 of the E! reality series.

Fans won’t, however, know the wrestlers on the roster until October 11, when Fox hosts Night 1 of the WWE’s two-part draft from Las Vegas’ T-Mobile Arena (it concludes October 14 on USA). SmackDown‘s October 4 premiere — set to feature Kofi Kingston defending the WWE Championship against Brock Lesnar at the Staples Center in Los Angeles — will largely be a star-studded 20th-anniversary tribute. Levesque confirms appearances by some of the biggest names to ever enter the ring, with fan favorites like Hulk Hogan and Goldberg among them.

Plus, “there are always surprises,” Levesque says. “You’re going to have those moments in that first show where big things happen.”

Launched in January, AEW has already made headlines — partly because inaugural men’s champion Chris Jericho, one of pro wrestling’s all-time greatest and cockiest, had the title belt literally stolen from him less than 24 hours after winning it on August 31. “It was kind of a happy accident,” admits AEW executive VP and wrestler Cody Rhodes. “Thank God it was returned with no damage, because it was very expensive.” That saga aside, the upstart league promises fans a sports-centric approach when Dynamite debuts as a live weekly series October 2 on TNT — opposite WWE NXT.

“We don’t have any writers,” insists AEW’s chief brand officer Brandi Rhodes (Cody’s wrestler wife), explaining why there should be less manufactured behind-the-scenes drama and scripted storylines than on other shows. The AEW wrestlers’ personas are more like exaggerated versions of the athletes themselves. There’s real-life dentist Dr. Britt Baker, the hard-hitting Awesome Kong (she also plays Tammé Dawson on Netflix’s GLOW), and Jungle Boy (Jack Perry, son of the late Luke Perry), whose unruly mane adds to his Tarzanesque character. 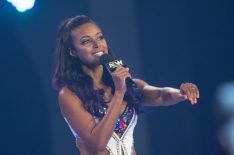 The premiere, broadcast from D.C.’s Capital One Arena, will devote equal time to the league’s male and female athletes, as is always their goal. Sports Illustrated‘s 2017 Wrestler of the Year Kenny Omega and tag-team brothers The Young Bucks will take on Jericho and two mystery partners. And groundbreaking transgender wrestler Nyla Rose will challenge rising Japanese star Riho for AEW’s first women’s world title.

“It’s going to be two action-packed hours,” says Brandi. “Fans are going to notice what we’re doing to stay ahead of the curve.”