America’s Got Talent (8/7c, NBC): And a child will lead them to reward the ultimate grand prize? It’s not guaranteed, but as the remaining 10 contestants prepare to wow the audience one last time in the final round before a winner is crowned Wednesday, quite a few prodigies are still in the race. Among the contenders: 11-year-old violinist Tyler Butler-Figueroa, 14-year-old singer Benicio Bryant, 10-year-old opera singer Emanne Beasha, South African Ndlovu Youth Choir and inner-city Detroit Youth Choir, dancing troupe Light Balance Kids, military singing group Voices of Service, stand-up comedian Ryan Niemiller, 29-person dance crew V.Unbeatable — and a standout from the very first episode this season, 22-year-old Kodi Lee, a blind and autistic musical savant. Find out who's one step closer to winning Season 14.

The American Game (7/6c, ESPN): With college football turning 150 this year, ESPN marks the occasion with a new weekly documentary series that celebrates the sport’s history. The time-slot premiere of The American Game kicks off by tackling the “Evolution of the Game,” charting college football’s transformation over the years as it became a national phenomenon with rooting interests in bars throughout America. (Everywhere I go, someone’s rooting for my IU alma mater.) 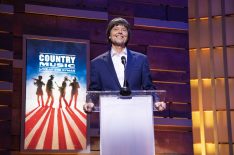 Country Music (8/7c, PBS, check local listings at pbs.org): In the third chapter of Ken Burns‘ mammoth history of country music, covering the years 1945-1953, the centerpiece is the too-short but influential career of “Hillbilly Shakespeare” Hank Williams, with colorful segments devoted to “smooth” pop crossover Eddy Arnold, the bluegrass stylings of Flatt and Scruggs and the arrival of Chet Atkins. But it’s the plaintive and hard-drinking honky-tonk veteran Williams, whose “I’m So Lonesome I Could Cry” became an anthem to the broken-hearted, who dominates the night. “He makes you feel how much he must have felt,” says an admiring Vince Gill. His music lives on, more than 65 years after his death at 29. Inside Tuesday TV: Discovery’s popular Bering Sea Gold (9/8c) is back for a new season, with the Kellys hoping to repeat their success from a year ago as the summer gold-mining season begins in Nome, Alaska… Returning to the Comedy Central lineup: Tosh.0 (10/9c) continuing its 11th season, as Daniel Tosh launches a new game-show segment, “Steve Will Do It,” featuring a man who will apparently do anything to be on TV; and The Jim Jefferies Show (10:30/9:30c) resuming its third season, featuring the Australian comedian’s global observations on culture and politics… NBC’s Bring the Funny (10/9c) ends its first season by naming a winner, with former contestants and surprise guests bringing you-know-what with comedy bits and skits.