Ask any fan of The 100 to pick a favorite season of the show, and there’s at least a 50 percent chance they’ll choose Season 2.

Objectively, Season 2 saw the sci-fi drama at its best. Its main characters were still developing (as was the world they inhabited), conflicts were layered and multifaceted and villains were complicated. “Blood Must Have Blood” was a shocking, resonant finale that cemented The 100‘s ability to ponder big questions about morality and ethics while not being preachy. And who could forget Raign’s “Knocking on Heaven’s Door” playing as Clarke walked away into the forest, toward an uncertain future?

Any fan who picked Season 2 as their favorite would be more than justified. But lately, it seems another season might give it a contender for the title of “best season”: Season 6.

While the sixth season is far from over, the story the show has told so far has been on par with earlier tales in terms of complexity of conflict, character development and expanding mythology. Here’s why we think Season 6 just might end up being the best season of The 100. 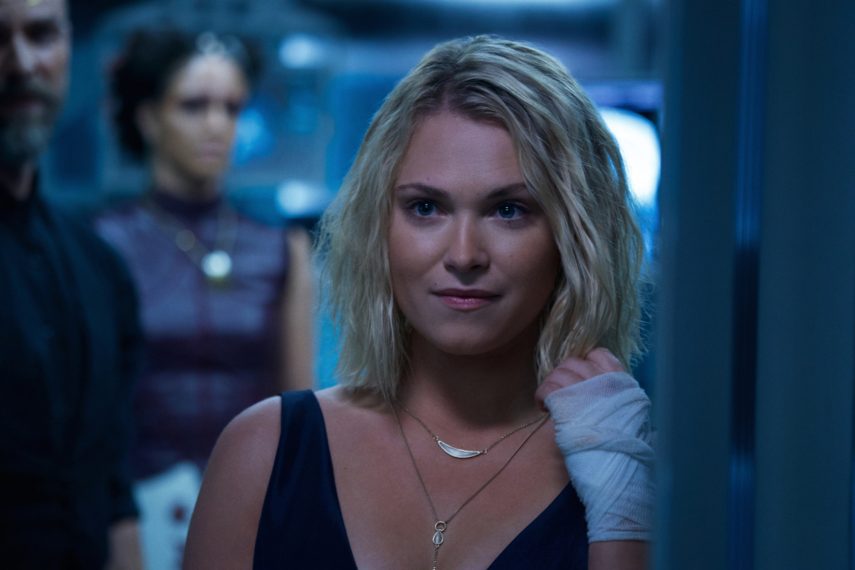 Before Season 6 began, some fans were worried the next 13 episodes would feel a bit repetitive. This wasn’t the first time we’d seen these characters explore a new planet, and it easily could’ve gone the same way as it did in Season 1 — main characters land, main characters are attacked by people already on the planet, conflict escalates, the warring sides then form an uneasy truce. Depending on how the story was told, this still could’ve been compelling. But the show opted to form a different narrative.

It seems the main characters haven’t started their own conflict, or at least not to the scale with which they started a war in early seasons. Instead, they’ve joined a battle that appears to have been waging before they arrived. Sanctum vs. The Children of Gabriel is an intriguing story on its own, but asking the main characters we’ve been following for five seasons to take a side in that battle, perhaps risking their ability to remain on a livable planet to do so? Easily the most immersive tale the show has told in years. Though we’re only five episodes in, this season has done more for existing characters at this point than many of the seasons since Season 2. Season 5 was a bit frustrating for fans who didn’t understand how certain characters reached a certain point in their stories, or why they were acting differently than they had been before the time jump.

Season 6 hasn’t ignored the way characters would feel about each other or the anger they’d have about certain things (namely, Clarke and Octavia’s actions in Season 5). It hasn’t traded character development for plot, but rather, it’s allowed both to develop. One of the best aspects of Season 6 is its worldbuilding. Many fans wished they’d known more about the world The 100 constructed on Earth — what was the deal with all the grounder clans? How did their mythology develop? How did their language form? What were the other clans besides Trikru and Azgeda like? — and although Earth is gone, the show has built a new world to explore.

So far, the show has done just that. It’s explored Sanctum in a way the grounder clans weren’t in earlier seasons, and it has made their society about more than just war and fighting. We understand the Sanctumites better than we understood the grounders at this point, since the writing has taken time to explain their mythology, their way of life and their belief system. Season 6 has allowed its characters to talk to each other and contemplate their next moves rather than having them make decisions unilaterally. Last season, there was plenty of that (Clarke taking Madi and leaving Bellamy, Octavia making decisions for everyone, Bellamy deciding to give Madi the Flame, etc.), and in previous seasons the characters had been separated and unable to talk to each other.

The 100 is always at its best when its characters have discussions and talk through their problems rather than sweeping those conflicts under the rug or tying them in a neat bow for the sake of moving the plot forward. This season especially has had plenty of plot twists that add to the story rather than feeling like shock value. While the plot twists in earlier seasons weren’t by any means bad, the narrative twists in Season 6 have been unique in that they allow both character and story exploration on a level we haven’t usually seen.

Turning Clarke into Josephine allowed for exploration of the Primes’ backstory, but it also opened new storytelling avenues for Bellamy, who now knows his closest friend has been “erased,” and Murphy, who may or may not be trying to get eternal life. It might even open new doors for Clarke, since we know she’ll be “facing herself” at some point — how will she emerge from that confrontation? Granted, Octavia Blake was a complex antihero for the fifth season. But other than that, the “villains” of The 100 hadn’t had the same emotional weight that the people from Mount Weather did. ALIE was cool, but she was a robot. We never got to explore much of Azgeda. Season 4’s villain was a natural disaster. Mount Weather’s villains, Cage and Dante Wallace, were so compelling because in the end, they were trying to keep their people alive and had very different ideas about how that goal would be accomplished.

From what we’ve seen so far, Sanctum’s leaders appear similar to — but not exactly like — Mount Weather’s. This is a good thing! The drama among the Primes is reminiscent of the squabbles between Dante and Cage, and Josephine’s fanaticism evokes echoes of Mount Weather killing Clarke’s people for bone marrow. Sanctum’s people aren’t evil for the sake of evil: They’re evil because they’re trying to hold on to eternal life, their families and their world. That’s a powerful motivation, and it makes for antagonists who are multidimensional and villains we love to hate.