Shiri Appleby is becoming quite the multitasker. Since wowing us with her gutsy turn as UnREAL‘s prickly, borderline-pathological producer Rachel Goldberg, the one-time WB starlet — who won fans over as the original Roswell‘s far-more-innocent Liz Parker — has been bouncing between gigs in front of and behind the camera.

Most recently, the L.A. native popped up on a riotous episode of Drunk History, directed an episode of The CW’s Roswell reboot and helmed this week’s episode of Pretty Little Liars: The Perfectionists. Her dance card is so full, in fact, that when we spoke to her about PLL, she was already deep into prep on another show and still delightfully upbeat. And that’s no lie, pretty, little or otherwise. Congratulations on this. You’re racking up quite the directorial IMDB page.

When did you realize that you wanted to try doing this?

I think when I got off of Life Unexpected. I was really set on [the idea that] I want to do more. I wanted to see what else I can do. So I spent about seven years shadowing directors and sort of gaining the confidence to ask for an opportunity, or, I guess, to be ready when the opportunity presented itself. Now, you’ve done Roswell, which was a pretty cool homecoming for you, but the Pretty Little Liars world has a specific look and a pace to it. Was there a learning curve to that?

Definitely. Every show definitely has its own language. I watched handfuls of the original Pretty Little Liars and I watched the pilot to The Perfectionists, since it has a little bit more of a sophisticated feel that Marlene [King, series creator] wanted. And then, Norman Buckley is their executive producer-director who had done oodles of episodes of the original. He was just an incredible resource for learning the language of Pretty Little Liars.

What did you bring of your own to this episode? Because that’s the draw, I’m sure, is to put kind of your take on things.

Yeah, absolutely. I mean, I always like to build out the emotions and have the relationships really land. At the same time, we shot a big fashion show so it was “How can I put that sort of UnREAL vibe of the behind-the-scenes chaos into it?” And I definitely feel like I did. Then, I got really lucky that there was a sort of sequence [with] this kind of scary sci-fi kind of vibe. I really relished the opportunity to not have to play in straight reality. So you got to do the fashion show they teased in last week’s episode?! In the PLL canon, fashion shows always end terribly. There’s usually some kind of horrifying moment or an embarrassment. Tell me about this fashion show. How off the rails does it go?

Oh, it goes off the rails because they’re also trying to uncover what happened to Nolan, so they have to leave for a little while. By the time they come back, things are happening quicker than they had imagined and they’ve also put themselves into a strange predicament so it doesn’t have the perfection that maybe Ava (Sofia Carson) would’ve wanted. It was really fun, making it as glitzy and glamorous as we possibly could. How was it shooting in Oregon?

Awesome. I’d worked in Oregon a little bit on Life Unexpected but I felt like the city, Portland, Oregon in Pretty Little Liars: Perfectionists, really sort of becomes its own character in the show. It adds the sense of nature and suspense and just not knowing what’s happening.

Yeah. On Life Unexpected, it felt like you were in the town portion of it, where there were shops and businesses. This, it’s like it’s a college campus and it’s always dark. Get ready for two worlds to collide.

Thankfully, in Portland they don’t have to pay for a wet-down. [Laughs]

Would you be happy to stay behind the camera or do you want to keep that balance?

It’s about keeping that balance. I absolutely love acting and even more so directing actors now and watching things come to life. I’m like, “Man, I can’t wait to act next time!” After I did a long run of UnREAL—that was a really emotional and a heavy character—you’re like, “Look, man. I need to fill up on my life again so I have stuff to push out.” Directing really fills me up. So I think acting is really about finding people you want to work with and partner with. In the meantime, until all those pieces to come together, directing is just so exciting for me. I’m so incredibly passionate about it.

And that’s a wrap. 💖 #plltheperfectionists #directing


So what’s next? What do you have on your docket next?

Right now, I am on my lunch break [because] I am directing two episodes of Light as a Feather. It’s a show on Hulu.

Yeah. I’m doing episodes five and six for the second season. I’m day-four in. Shooting’s going great and I’m having the best time with these kids. The show shoots in LA, which is a real dream. It’s a show that you could be really, really creative with, visually. It’s all about making it happen quickly. So I’m having a great time. 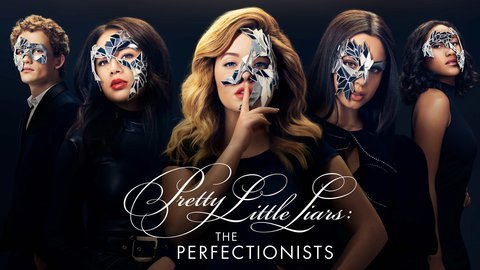