‘American Idol’ vs. ‘The Voice’: Which Are You Watching This Season? (POLL)

It’s battle of the music competition shows as American Idol andThe Voice contend against each other on Monday nights.

Despite Idol‘s years of notoriety, its ABC revival — which began last year — doesn’t seem to be retaining the same audience size it once had, and it doesn’t outnumber The Voice‘s viewership. In a recent ratings report by Deadline this past week, Idol‘s numbers continue to drop as it hit a series low. The show supposedly dipped to its lowest audience rating overall, including its 15 seasons at Fox and its two seasons at ABC. Meanwhile, The Voice was on the other end of the spectrum as the top rated show of Monday night on April 1. But as any viewer knows, ratings don’t always count for everything.

Both shows have put their best foot forward with strong contestants, but it all depends on what you’re tuning into. The Voice allows the coaches to pick singers based solely on their talent versus their looks, but Idol has proven — with picks like the unique Alejandro Aranda (a new contestant whose audition was among YouTube’s top-trending videos) — that they aren’t deaf to good sound. 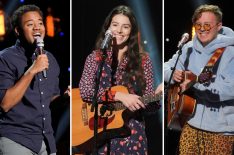 Did your favorites make it?

The Voice certainly upped the ante this season though by adding John Legend to their panel of coaches. Considering the EGOT is a big get for the already popular show, it’s clear to see why it remains a top-viewed program.

But not every viewer tunes in live either. As mentioned above, YouTube and streaming services like Hulu offer fans a way to watch without doing so live. So we want to hear from you: Which show do you prefer? Let us know in the poll below.