When it was revealed that Michonne and Daryl had twin X-shaped scars on their backs, The Walking Dead fans went wild. They speculated the cause to be anything from self-inflicted marks in remembrance of Rick, to Daryl donating a kidney to his longtime friend. The truth? A secret far, far darker than many probably imagined.

“Scars” feels like a sibling to Season 4’s “The Grove,” which saw Carol telling young Lizzie Samuels to look at the flowers. It’s one of the most powerful hours The Walking Dead has ever aired (and it should have earned Melissa McBride an Emmy nomination). “Scars” takes the same central conflict of its predecessor and ramps it up a few levels. What do you do when faced with an old friend who threatens your future? What do you do when there are children caught up in that conflict?

Michonne and Daryl grapple with those questions for a stunning, moving, contemplative episode that goes exactly where you hope it wouldn’t.

The episode opens with a flashback of Michonne looking for Rick over a lengthy span of time — if her growing stomach is any indication, she searches for around nine months. She runs into Daryl as she searches along the river, and he tells her he’s followed it out to the ocean. He didn’t find anything. Michonne invites him to come back to Alexandria, but Daryl refuses to do so until he “finds something.”

In the present day, Daryl arrives at Alexandria with Connie, Henry and Lydia. The folks at the gate aren’t too pleased to see Lydia with him, but Michonne trusts Daryl and gives them permission to let the group in. In the past, a group arrives at Alexandria’s gates; a woman with several children. Michonne doesn’t hesitate to let them in, and when the group enters, she recognizes the woman. “My god,” she says. “Jocelyn?”

An Old Friend, A New Threat

Jocelyn turns out to be an old friend of Michonne’s from her years in school; she says Jocelyn got her through heartbreak and losing her mother. As it turns out, her old pal has semi-adopted a large group of young, elementary-to-middle-school-aged children. Jocelyn’s too injured to go get the rest of them herself, but Michonne brings the rest of the youngsters back to Alexandria.

Henry gets his leg fixed up and he and Lydia sit outside. As they chat, Michonne approaches and asks to talk to Lydia alone; once Henry leaves, she basically tells Lydia that she should think about striking out on her own and leaving the rest of her tiny group in order to save them. Meanwhile, Daryl and Judith have a chat. Judith wants everyone from all the communities to come together and fight the Whisperers, based on the fact that she’s heard the stories about the war against Negan and thinks they can win again.

“You haven’t heard all the stories,” Daryl tells her. 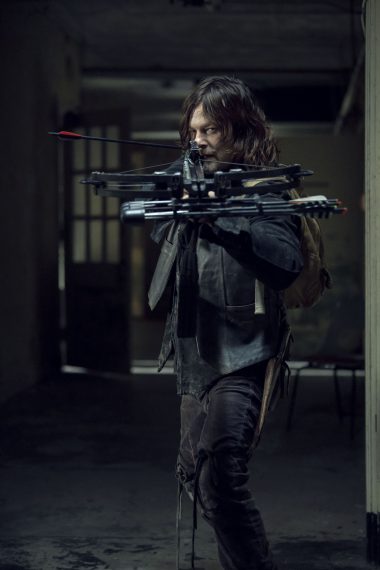 It becomes clear Jocelyn and her kids are fitting right in inside Alexandria. A little too well, as it turned out. When Michonne and several of the other Alexandrian parents go to get their kids from Jocelyn’s house the morning after a big sleepover, they find the house empty, the pantry empty and the infirmary empty of supplies. Their kids are gone. They also find one of their people killed outside a house, and bloody footprints leading into a sewer.

In the present, Michonne lets Daryl and his group go. It’s a decision that doesn’t sit well with Judith, and forms the main conflict for the episode; Judith’s so upset about Michonne’s unwillingness to help their friends that she takes it upon herself to do so, and she goes out into the woods on her own. Michonne, desperate to find her, first checks Negan’s cell and has an angry chat with him about what stories he’s been telling her daughter; he’s told her everything, including what he did to Glenn and Abraham.

“The point is,” Negan says, “I shoot straight with her. Maybe if you did that, you’d be talking to her right now instead of me.” Daryl and Michonne search for Jocelyn and the kids and find them in an abandoned school. They’re both knocked out and tied up. When they awaken, the children (minus Judith and the Alexandrian kids, who are nowhere to be seen) use a hot iron to brand them both with the “X” that would one day become a scar. “I told you children are capable of anything,” Jocelyn tells Michonne. “I taught them, helped them become what they are because they can’t be soft. Not now.”

When the kids and Jocelyn leave, Michonne and Daryl escape. They split up and look for the kids, but Michonne runs into Jocelyn and a few kids: one’s armed with her katana, the other with a knife. The kids, at Jocelyn’s prompting, express their duty to “mark our kill” (as they marked Michonne and Daryl,) “kill our mark.” The rest of the kids and Jocelyn evacuate and lock the school doors, leaving Michonne with two armed and deadly kids.

“I don’t want to have to hurt you,” Michonne tells them. One attacks but drops Michonne’s katana, and the other slashes Michonne in her pregnant belly. Michonne picks up her weapon and they both run away, leaving her to find a non-locked exit to the building. When she does, Jocelyn attacks her, but Michonne deals her a fatal wound. Children Are Capable of Anything

After all that unfolded, Michonne still wants the kids to come back to Alexandria and says they’ll take care of them. One of the oldest gives the order they follow — he tells one, named Winnie, to kill the Alexandrian kids, the rest are with him. She kills the older kid first, then another, much younger child rushes at her with a knife. She holds him away and begs him to stop, but he keeps coming. Another kid, older, runs at her. She kills him.

Winnie is getting closer and closer to killing Judith and the other Alexandrians, approaching the trailer where they’re being held with a knife. Michonne is forced to kill all the assembled children to stop them from killing her. Winnie stands in the doorway of the trailer with a knife, and as Daryl walks out of the building, Michonne orders Winnie not to do it. “Don’t,” she says. Winnie doesn’t. Instead, Winnie’s face crumples and she runs away.

Judith walks out of the trailer and stares blankly at Michonne for a few moments, then runs into her arms. All the rest of the Alexandrian kids follow, unharmed, and Michonne returns them to their families.

We Must Tell Alpha

In the present, Michonne manages to find Judith outside the walls, where the kid has managed to take down several walkers. She’s doing pretty well, but one of the undead grabs her shirt and starts pulling her toward it. “Mommy!” Judith yells. “Help!” Michonne frees her, and later, they talk about that day with Jocelyn and what it means to love someone.

According to Judith, loving someone is wanting to protect them no matter what. So when, she asks her mom, did they stop loving Daryl, Maggie, Carol and the King? They haven’t, Michonne says, and she takes Judith to Carl’s grave to explain her decision. The whole community’s fear after what happened with Jocelyn led them to close their doors, even though that wasn’t what Carl wanted. She tells Judith she was right. “We have to protect the people we love,” she says.

They pick up Daryl and his group on the way to the Kingdom and give them a ride to the fair. But as they approach their destination, a pair of Whisperers see Lydia is with them. “We must tell Alpha,” one says.